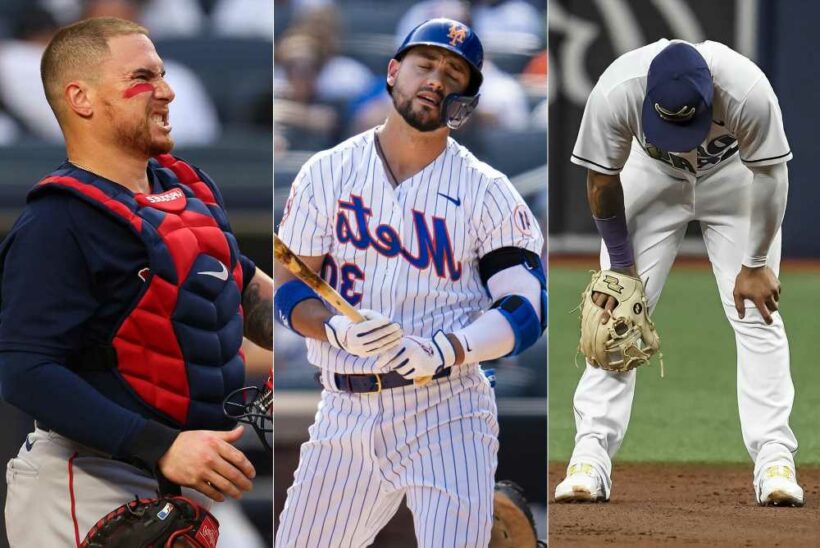 NFL's 'black' and 'white' anthems will only promote divisiveness

More from the desk of Dooley Noted:

While I haven’t seen much of the Giants or A’s, thus far, it strikes me that MLB this season might be without a good team, meaning the World Series will be played between two new-standard, substandard teams.

I haven’t seen a team that’s even marginally proficient at doing those things — the fundamental things, big things, little things — that win ballgames. And I haven’t witnessed the manager who demands better.

We’re often told that the Rays, first place in the tough AL East as of Friday, are special, yet they led the majors in strikeouts per game with 10.

They also led the bigs in grounding into double plays, something of an incongruity given that having a runner on, then hitting the ball in play, and striking out exist in opposite orbits.

The Red Sox? They had the second most errors; only the Marlins had more. Boston catcher Christian Vazquez led MLB in passed balls and errors.

That the Mets, who had been in first place for 90 consecutive days before Friday’s games, lost three of four to the Marlins this past week in a series determined by bad baseball, especially indiscriminate batting and rotten defense, didn’t strike the attentive as surprising or unusual.

But the worst news is that this is the direction in which big league baseball has been headed for 20 years. While flamboyant home run celebrations are practiced until perfected, game circumstances are ignored.

And not only has it grown worse, no organization seems even slightly inclined to fix it. It’s self-destruction from the inside, out.

Turning a blind eye to atrocities of women’s gymnastics

“Fair-minded people decided that the abuse of circus elephants must end.

“Yet the same people have no problem with the exploitation of young women gymnasts. Where else can you find women more mentally and physically abused? Where do they exist in everyday society?”

Well played. This hideously unconscionable international reality has been on universal display since before whip-cracking Bela Karolyi and his wife/assistant defected to the United States from Romania, where he coached — ruled — the Romanian Olympic team in the mid-1970s.

Since then, the abuse, much of it self-evident and much of it reported by victims later in their physically diminished lives, has been copied and sustained.

These symptoms include squeaky voices, chalky skin, growth and nutritional deprivation — so many female gymnasts are tiny compared to their biological parents — hormonal manipulation, brittle bones, chronic hip, wrist and back ailments, ankle and foot fragility, and an absence of menstrual cycles that in some cases have lasted lifetimes.

Yet, on we go, NBC hyping the women’s Olympic teams as “America’s Darlings,” no good questions asked as they have no good answers. After all, there’s money — TV ratings — at stake, thus the truth be damned.

American TV, depending on who owns the rights, has always taken a dive for the Olympics.

Not until CBS lost rights to the Winter Games to NBC in the 1990s did “60 Minutes” report that IOC boss Juan Antonio Samaranch (who died in 2010) was an unrepentant World War II fascist operative later given to buying the Olympic allegiance of murderous dictators.

Until then, CBS regarded Samaranch as a pal.

In 1984, Samaranch bestowed the Gold Medal of Olympic Honor on Romanian despot and Soviet puppet Nicolae Ceausescu, who in 1989 was convicted at trial then executed as a mass murderer of his own people, mostly anti-Communists.

But with NBC next in bed with the IOC, Samaranch, a former Spanish diplomat, was addressed as “Your Excellency.”

Yoenis Cespedes, Robinson Cano and now Javy Baez. Why are the Mets always the last to know and the first to acquire “stars” who specialize in giving both sides a chance to win?

Watching Baez leave eight runners on while striking out five times Thursday — all against unaccomplished pitchers, one with an ERA of nearly eight — was beyond the beyond, a prop bet DraftKings doesn’t even offer. Make. It. Rain.

It’s nuts out there. And it’s not just Aaron Boone. Hardly!

Why shouldn’t Thursday’s 5-0 Angels win over the Rangers have lasted an illogical three hours?

Why was it necessary to use eight pitchers in such a game? Three relievers were removed after allowing no hits and striking out three in three total innings. But at 3-0 after 2 ¹/₃ innings, the game was unplugged.

Also Thursday, the Diamondbacks had the Giants beaten, 4-0, when Arizona manager Torey Lovullo decided starter Merrill Kelly, who had allowed just three hits through eight, had to be yanked in order to play Bullpen Roulette. Arizona lost, 5-4, in 10.

And he’d do it again! They all would!

Doing little for ‘students’ of the game

All there radical changes in college football and basketball — conference additions and subtractions, money paid directly to players (in addition to the cash they’re handed through Pell Grants), scores of easy-come, easy-go transfers — yet nothing to cure the academic, financial and social fraud that allows American colleges to operate as fronts for football and basketball teams.

And still nothing to even minimally encourage full scholarship student-athletes to depart their colleges with the ability to speak discernible, useful English or balance a checkbook — if they have any funds to track.

And if you don’t make it as a pro, you’re returned to the squalor from which you were recruited, unemployable despite an ostensible and free college education. Whereas legit students begin their social, financial and filial ascents with graduation, countless athletes, recruited only to help win games, peak at 22.

In 1989, NFL defensive lineman Dexter Manley made national news when he testified before a U.S. Senate panel about how he matriculated for three years at Oklahoma State — his coach was Jimmy Johnson, now of Fox, who later exploited such recruits to coach the University of Miami and the Cowboys — despite being a functional illiterate.

Shocking! We must act to ensure it never happens again!

Yeah, sure. Now the Dexter Manleys are a dime a dozen.

The NFL is eager to promote equality? Start with literacy.

Having long been afflicted by acute clumsiness, two Saturdays ago I took a header in a Peekskill restaurant parking lot, cracking my head open. A swollen head, 30 stitches and a three-day stay in an ICU head trauma unit, I left looking like Mr. Met.

But as I awaited the ambulance in that parking lot, I was tended to by a gracious, generous restaurant patron named Allison, a physician’s assistant somewhere in Westchester County. My eyes were so filled with blood I couldn’t even see her, but I know she had two kids waiting in her car.

I’d very much like to find Allison to thank her for her kindness and treatment. If you can put me on that track, please email me. Thanks.