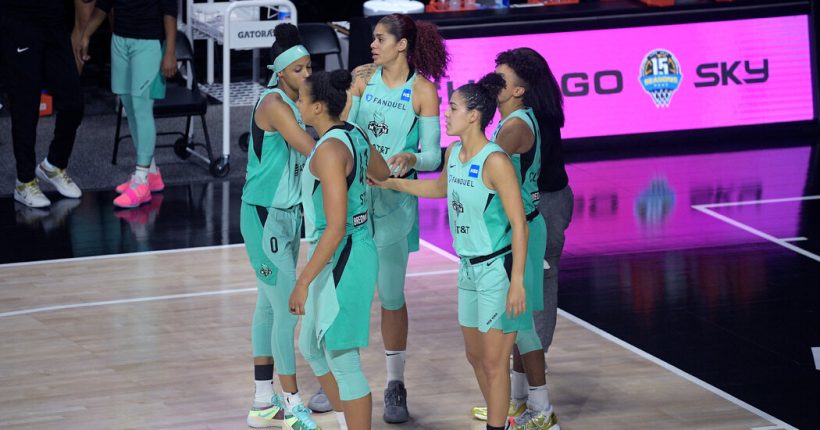 At first glance, the Liberty aren’t anywhere near contending in the W.N.B.A.

They finished 2-20 during the bubble season in Bradenton, Fla., last year, and the numbers don’t get any more encouraging below that top line. The Liberty’s offensive efficiency, 87.3 points per 100 possessions, ranked at the bottom of the league — by a lot. The gap between the Liberty and the Atlanta Dream, ranked 11th of the 12 teams, was larger than the gap between Atlanta and the No. 1 team, the Seattle Storm.

In years past, the off-season wouldn’t offer much hope for a team in the Liberty’s position, with the league’s best players locked into long-term contracts and few free agents expected to make big moves. But that kind of off-season is no longer the standard under the collective bargaining agreement signed last January. Last year, many big names, including Skylar Diggins-Smith and Tina Charles, moved to new teams: Diggins-Smith to Phoenix from Dallas and Charles to Washington from the Liberty.

The timetable for a W.N.B.A. team to turn itself into a winner is significantly shorter under the new rules, which include a much higher max salary and fewer core designations — the league’s equivalent of the N.F.L.’s franchise tag.

So for the Liberty’s general manager, Jonathan Kolb, that means this off-season is more than just a chance to improve at the margins. A winter that can both define the Liberty’s rebuild and catapult the team into the playoffs is within reach.

“Absolutely,” Kolb said of whether the Liberty could expect a drastic change in 2021. “For the history of the league, up through last season, teams really improved via the draft. And you go back and look: Trades really weren’t much of a thing.”

Salary Cap: Stick with the rookies.

But a byproduct of the new C.B.A. is pressure on general managers. The max salary jumped 80 percent to $215,000 from $119,500, while the salary cap increased around $300,000, or about 30 percent. Suddenly, a status quo that had roughly 40 percent of the league earning a max salary couldn’t hold. Teams with multiple stars who could command max salaries as they completed their old deals spent big last off-season, setting themselves up to have to make difficult decisions this year and beyond.

The Liberty, however, are overstocked with cap-friendly rookie contracts. The team is building around Sabrina Ionescu, last year’s top overall pick. A team that played seven rookies last season has similarly cost-effective young pieces up and down the roster as well.

“The rookies will mature as players, and they’re going to be more ready to step in and be more efficient,” Kolb said. “And in terms of the system, I mean, of course, we will change things up. We’ve been deep diving into doing an autopsy of our season, and looking at all of it, offensively and defensively. And so I think it will be a combination of personnel and improvements.” 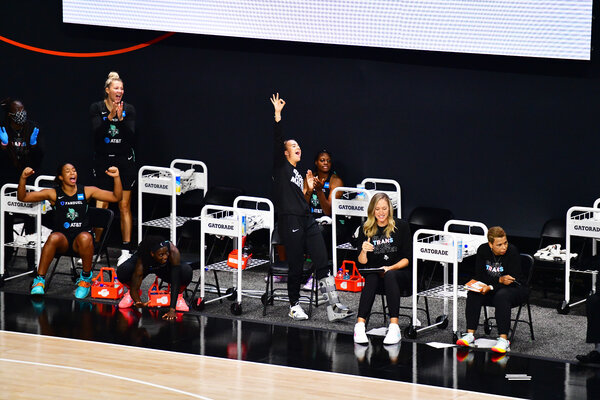 One place the Liberty appear set is at the point guard position. Though Ionescu played only three games before an ankle injury ended her season, she quickly displayed the evolved offensive repertoire that turned her Oregon team into a juggernaut, and her 33-point effort against the Dallas Wings served notice that her production translates to the next level. When Ionescu went down, Layshia Clarendon, a former All-Star, took over point guard duties and provided veteran leadership. With Clarendon running the offense, the Liberty proved they could play at the speed Coach Walt Hopkins preaches, finishing second in the league in pace.

Ionescu’s return will give the Liberty even more options. Her pick-and-roll skills juiced the offense at Oregon, where she collaborated with rolling bigs like Ruthy Hebard (now with the Chicago Sky) and Satou Sabally (now with Dallas).

It is easy to picture the team around Ionescu taking form. Kia Nurse, whose season-long shooting slump in 2020 came after her breakthrough All-Star 2019 season, seems likely to return to form. The perimeter looks that Hopkins’s system generates should be more fruitful with the sharpshooting of Rebecca Allen of Australia and Marine Johannes of France, both of whom opted out of the 2020 season over concerns about traveling to the United States during the pandemic.

The team’s primary center from last year, Amanda Zahui B., is a free agent. Kiah Stokes, who recently signed an extension with the Liberty, is efficient around the rim but struggled from 3-point range for a team that gave everyone the green light to shoot from deep.

The market ahead offers multiple ways to address this deficiency, while potentially pairing the younger Ionescu with a veteran big with championship experience. Natasha Howard, who was a bench player on Minnesota Lynx championship teams and then a vital part of the Seattle Storm title winners in 2018 and 2020, is a free agent. She shot 35 percent from 3-point range last year, while feasting on interior defenders worn down from trying to stop Breanna Stewart. But Howard was the fourth offensive option in Seattle, after Stewart, Sue Bird and Jewell Loyd, and she could decide to join the Liberty and become more of a focal point. She averaged only 7.5 shot attempts per game in 2020.

Then there’s Nneka Ogwumike, the longtime Los Angeles Sparks forward. Like Howard, she is a free agent, and like Howard, she was relatively low on the pecking order in Sparks Coach Derek Fisher’s offense last year, averaging a career-low 9.3 shot attempts per game. She’s also the president of the W.N.B.A. players’ union and, with a move to New York, would find herself a subway ride away from its headquarters.

While Seattle and Los Angeles have given Howard and Ogwumike core designations, that only guarantees compensation for the teams should the players force their way out. That was how Charles and Diggins-Smith landed with new teams last season. A lineup of Ionescu and either Howard or Ogwumike, with the other returning Liberty players like Nurse and Allen, would be the framework for a true contender.

Draft: Keep the pick — or cash it in?

And the Liberty have the luxury of free agency coming before a draft, expected to take place in April, in which they again hold the top overall pick. That pick is a primary asset the Liberty can use to put the finishing touches on an off-season with a big free-agent signing or in a trade to acquire a second star to play alongside Ionescu.

Kolb did not mention any free-agent targets, but he did indicate that he hoped most of the Liberty’s team-building work would be concluded before the draft. Then again, if the right players cannot be recruited this winter, it just means running the same play again in 2022, when players like Stewart and Jonquel Jones of the Connecticut Sun could hit the free-agent market.

“I think the most exciting thing is, we’re in position to do something,” Kolb said. “We’re positioned cap-wise, flexibility-wise, that if they’re interested in coming to New York, we’re in a position to capitalize on it.”