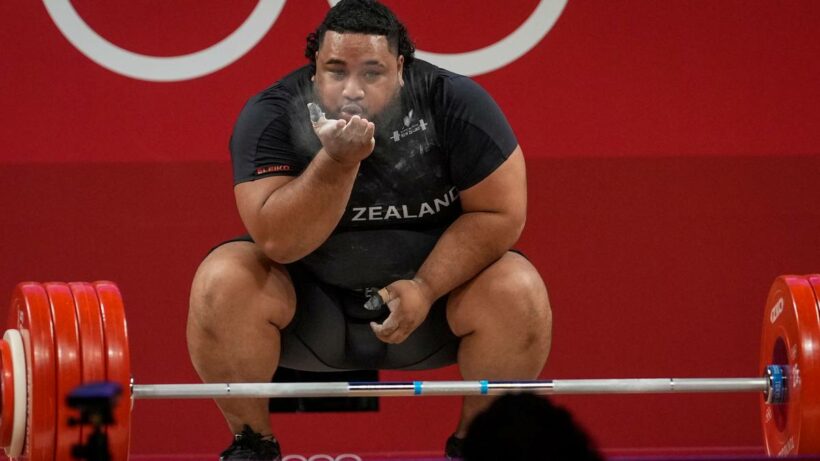 David Liti won’t be leaving Tokyo with an Olympic Games medal, but he is sure to have won over plenty of fans with his display on the platform for the men’s +109kg weightlifting competition.

As he did when he won gold at the Commonwealth Games in 2018, Liti caught the eye of those watching with his unique and bubbly personality.

Full Kiwi schedule below. Click on a name to see athlete’s bio, upcoming events, past Games performance and medal chance.

“Do not mistake the giggles and the smiles before he comes on…his way of focusing is very different to a lot of other lifters.

“He just looks like he’s thoroughly enjoying these Olympic Games.”

Liti finished the competition in fifth place, pairing a new personal best in the clean and jerk of 236kg with a 178kg lift in the snatch to post an overall weight of 414kg.

Georgian powerhouse Lasha Talakhadze claimed the gold medal, posting new world records in both the snatch (223kg) and the clean and jerk (265kg), for a total lift of 488kg – also a world record.

Speaking to Sky Sport, Liti admitted he had some nerves heading into his debut on the Olympic stage.

“There has been a lot of hard work that went into this, and I was just nervous I wasn’t going to show it,” he said.

“I’m thankful everything came together, but I’m sure next time will be a better performance. I hope I did everybody proud and I hope I did enough.

“It was fun. I can’t explain to you how good that felt and now that it’s done, I’m kind of homesick so I can’t wait to go home.”

For Liti, the event showed his improvement over the past few years since he burst onto the scene at the 2018 Commonwealth Games on the Gold Coast, topping the total lift he managed there by 11kg.

The 403kg he achieved then was a Commonwealth Games record, and he said while he had enjoyed his time at the Olympic Games, his focus would immediately switch to defending that title.

“It’s straight into Commonwealth Games preparation, so my quarantine will be my chill time. Honestly, I can’t wait. I don’t usually like to predict things and come out as if I’m confident and stuff, but I would love to win back-to-back gold at the Commonwealth Games, so that is the goal.”