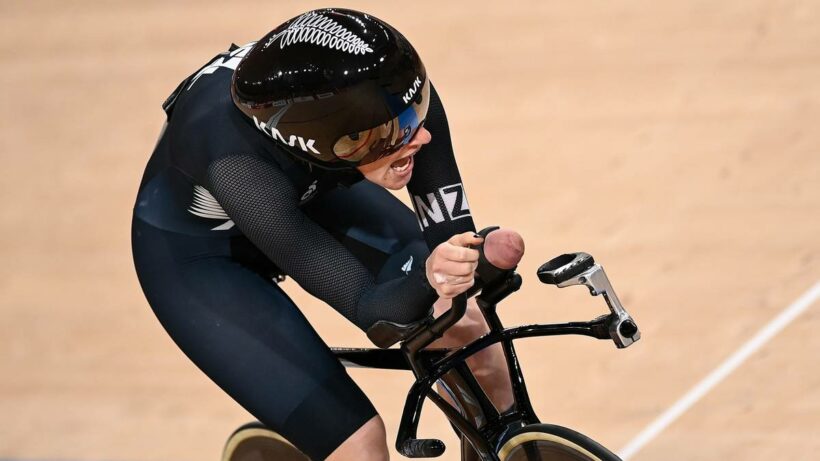 All the action from the opening day at the Tokyo Paralympics:

Nicole Murray has been unable to claim New Zealand’s first medal at the Tokyo Paralympics, left to settle for fourth in the C5 3000m individual pursuit this evening.

Murray was facing a huge challenge in the bronze-medal race, with French opponent Marie Patouillet having recorded a qualifying time seven seconds quicker than the Kiwi, and that showed in the final 500m of their duel.

Patouillet led throughout the race but Murray had managed to keep the margin within a second until the final laps, when the Frenchwoman powered home to win by 5.249 seconds.

An outstanding attacking effort from late call-up Barney Koneferenisi was unable to prevent the Wheel Blacks from falling to a heavy defeat in their opening wheelchair rugby game.

The second-ranked United States ran out 63-35 victors over New Zealand this afternoon in Tokyo, despite Koneferenisi leading all scorers with 23 tries.

Koneferenisi was called into the team only last month when Cameron Leslie withdrew but his performance provided a real bright spot for a young Wheel Blacks team, who will be facing Great Britain in their second game tomorrow night.

Kiwi track cyclist Nicole Murray will ride for a bronze medal this evening in the C5 3000m individual pursuit.

Murray was well beaten by legendary Brit sportswoman Dame Sarah Storey in their heat,but had the fourth fastest time overall.

The Kiwi – who had her left hand amputated below the wrist – has won world pursuit silver and bronze medals since 2018.

Murray might have her work cut out adding an Olympic medal though – her heat time was seven seconds slower than Patouillet’s.

Anna Taylor has missed out on the 3000m individual pursuit (C4) bronze medal race, despite setting a Paralympic record in the heats.

Taylor beat China’s Ruan Jianping by 11 seconds but it wasn’t enough to be in the medal mix in the field of six riders.

She finished about 12 seconds shy of the bronze medal race, which will be between the German and American riders. Aussie favourite Paige Greco recorded the fastest time, one of three world records set during this qualifying, and faces China’s Xiaomei Wang in the gold medal race.

Reynolds, who competed in butterfly and backstroke at Rio five years ago, had the second slowest time of the 13 entrants. He finished 16 seconds behind his impressive heat winner Alexander Tuckfield of Australia.

The final will include world record holder Brenden Hall of Australia, who finished third in the first heat.

11.20am: Busy day ahead for Kiwi athletes

Swimmer Jesse Reynolds is the first New Zealander to compete at the Tokyo Paralympics, in the Men’s 400m Freestyle – S9 heats at midday. Then it’s a busy schedule at the velodrome with Sarah Ellington, Anna Taylor andNicole Murray in their respective Individual Pursuit qualifying. The Wheel Blacks open their campaign after missing the last two Paralympics with a clash against Great Britain. The first chance for a medal could come in the cycling just before 5pm.

The Paralympics are being held without fans, although organisers are planning to let some school children attend, going against the advice of much of the medical community.

International Paralympic Committee President AndrewParsons and Seiko Hashimoto, the president of the Tokyo organising committee, say the Paralympics can be held safely. Both have tried to distance the Paralympics and Olympics from Tokyo’s rising infection rate.

“For the moment we don’t see the correlation between having the Paralympics in Tokyo with the rising number of cases in Tokyo and Japan,” Parsons told The Associated Press.

Some medical experts say even if there is no direct link, the presence of the Olympics and Paralympics promoted a false sense of security and prompted people to let down their guard, which may have helped spread the virus.

10am: The Games are open, first positive Covid test

The Paralympics began last night in the same empty National Stadium — during the same pandemic — as the opening and closing ceremonies of the recently completed Tokyo Olympics.

Japanese Emperor Naruhito got it all started again, this time under the theme “We Have Wings.” Among the few on hand were Douglas Emhoff, husband of U.S. Vice President Kamala Harris, International Paralympic Committee President Andrew Parsons and International Olympic President Thomas Bach.

The New Zealand team did not attend for safety reasons with Sophie Pascoe and William Stedman named as Hāpai Kara instead of flagbearers.

It was a circus-like opening with acrobats, clowns, vibrant music and fireworks atop the stadium to mark the start of the long parade of athletes.

Tokyo and Paralympic organisers are under pressure from soaring new infections in the capital. About 40% of the Japanese population is fully vaccinated. But daily new cases in Tokyo have increased four to five times since the Olympics opened on July 23. Tokyo is under a state of emergency until Sept. 12, with the Paralympics ending Sept. 5.

Organisers on Tuesday also announced the first positive test for an athlete living in the Paralympic Village. They gave no name or details and said the athlete had been isolated.