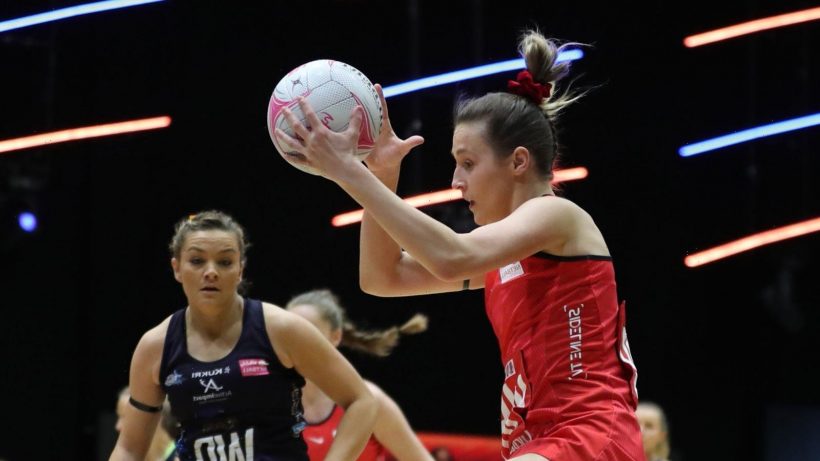 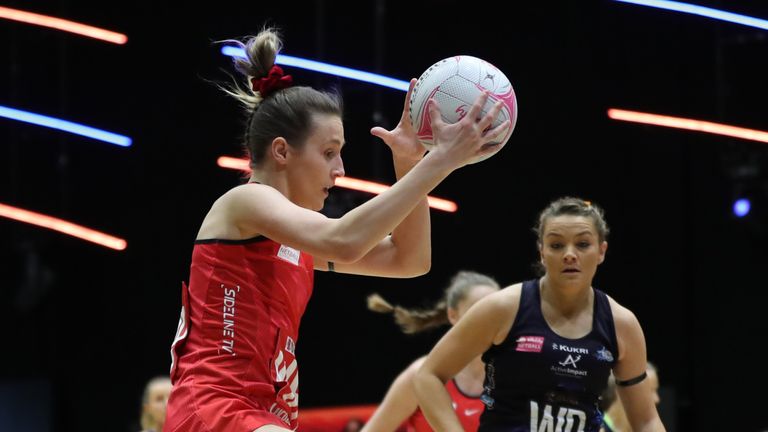 Georgia Lees speaks to Sky Sports about combining her sporting and professional ambitions, as well as opening up on Saracens Mavericks’ disjointed season.

Lees, who joined Mavericks from Surrey Storm, is now in her third season with Kat Ratnapala’s outfit and spoke to Sky Sports ahead of 10-match Vitality Netball Superleague weekend.

After the competition’s move to the Copper Box Arena in London a week ago, all teams are preparing for a wealth of netball over the course four days as Rounds 13 and 14 come to town.

Mavericks have another quick turnaround to cope with as they take on Loughborough Lightning on Friday night, before meeting Celtic Dragons on Saturday evening.

For Lees, being organised and prepared for busy times is very much the norm. Like so many within the Vitality Netball Superleague, she’s a master at juggling priorities as alongside her commitment to Mavericks, she works as a qualified physician associate in the NHS.

With netball enjoying greater visibility than ever before, and players’ profiles rising, Lees told Sky Sports that more women and girls are connecting with her to ask how she manages her own workloads.

“It’s been nice to share my experiences and I’m always quite honest in saying that it is really tough, and you do have to learn to prioritise your life.

“I’ve started to live my life by an excel spreadsheet and by my diary, I don’t know what I’d do without it,” she said with a big smile on her face.

“I just hope that I can be an example to them to show that you can have a professional career and pursue other things as well.”

Within her professional career, Lees felt the impact of the pandemic as everyone within the hospital where she was then training stepped up.

Following initial uncertainty about whether or not her placements would continue, Lees found herself facing new challenges and really needing to draw upon the robustness she feels her sporting life has given her.

“Netball does teach you to be resilient and it teaches you to face things. I think that the skills that you learn from netball, have helped me to prepare for the professional side of things as well.

“I went back to my placement after a week off whilst they finalised some things and was no longer really working as a student,” she recalled.

“We were really on the ward rounds with our consultants. It’s been a really good experience but it has been a tough year.”

Looking specifically at the Vitality Netball Superleague season, ‘tough’ is how you could also describe Saracens Mavericks’ campaign to date. After 12 rounds, Ratnapala’s ambitious team sit in fifth position, with seven wins, four losses and a draw to their name.

It’s widely documented that their squad is packed with talent and when other head coaches read their line-up it sends ripples of anxiety through them. However, true consistency has evaded Mavericks so far, and Lees doesn’t shy away from this.

“There’s a lot of external pressure and scrutiny [this season],” she said.

“I think that’s great for the sport and it’s what the sport needs. With every game being shown, everyone’s able to see what went wrong and see all of your weak spots… other teams can go into fixtures fully prepared for you.

“But, I think that a lot of it is the internal pressure we put on ourselves, to be better and to perform better as a team. We know the potential that we have as a squad and also as individual players.”

What those looking at Mavericks’ results so far may not know, is that their pre-season wasn’t the easiest. Ine-Mari Venter, their key South African import shooter, arrived late due to the pandemic and as a squad, they’ve had to isolate three times. That said, we’re now into the second half of the season and Lees is aware that time is ticking by.

“For us as a squad this year, it’s been those unforced errors that everyone seems to speak about; footwork, dropped balls and offsides. They’re the basics for us and that’s what we’ve been disappointed with.

“Now, it’s nice to see those things are improving week-on-week and in a training environment, we’re having those honest conversations. I think that’s starting to show on court, but we would like that to be more consistent over the 48 minutes.”

Despite a few frustrations, there’s still a lot of netball left to come in the 2021 Vitality Netball Superleague season and Mavericks’ sights remain locked on it being a success.

“Top four, that’s our aim. Every year, we aim for the top four,” Lees said.

“For us, we know that we have the players and the capability to do that. It would mean the world to win it, and to win it with this team because we’re such a close-knit group of girls. It would just mean everything.”