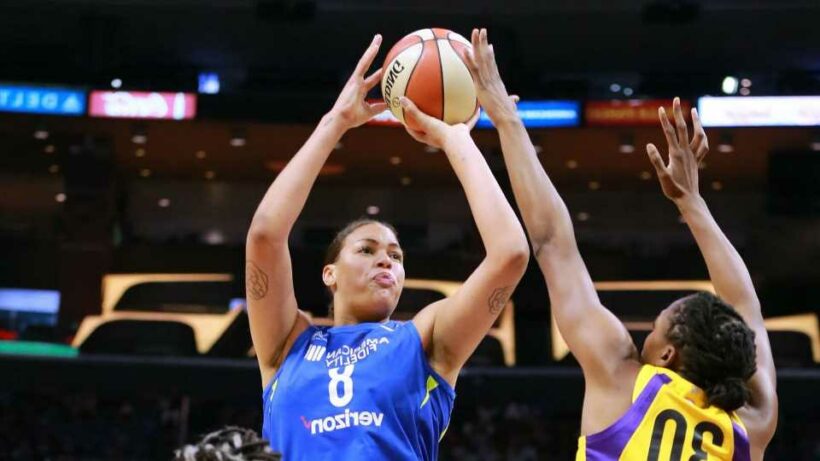 Cambage reportedly engaged in a verbal and physical exchange during a behind-closed-doors scrimmage match against Nigeria in Las Vegas, where the Australian women’s team are based ahead of their quest for gold in Tokyo.

News Corp also reported the four-time WNBA All-Star broke national team protocols to go out in Las Vegas recently, a matter which was already under investigation by Basketball Australia.

According to ESPN’s Olgun Uluc, the pair of incidents prompted an investigation and “discussions regarding her potential removal” from the team just a week before the games commence.

However, Cambage released a statement late Friday, revealing she had decided to withdraw from the Olympic team citing concerns over her mental health.

“Anyone that knows me knows one of my biggest dreams is winning an Olympic gold medal with the Opals. Every athlete competing in the Olympic games should be at their mental and physical peak, and at the moment,” the 2012 Olympic bronze medalist said.

“I’m a long way from where I want and need to be. It’s no secret that in the past I’ve struggled with my mental health and recently I’ve been really worried about heading into a “bubble” Olympics. No family. No friends. No fans. No support system outside of my team. It’s honestly terrifying for me. The past month I have been having panic attacks, not sleeping and not eating.

“Relying on daily medication to control my anxiety is not the place I want to be right now. Especially walking into competition on the world’s biggest sporting stage.

“I know myself, and I know I can’t be the Liz everyone deserves to see compete for the Opals. Not right now at least. I need to take care of myself mentally and physically.

“It breaks my heart to announce I’m withdrawing from the Olympics, but I think it’s best for the Opals and myself. I wish them nothing but the best of luck in Tokyo and I hope they go forth and win a gold medal. Love and light,” she concluded.

The AOC will explore the potential for a late replacement for Cambage in the Opals Team.

“Liz has made a great contribution to the Australian Olympic Team over two Olympic Games campaigns. We respect her decision and wish her the best in returning to full health,” Chesterman said.

“Our focus now moves to working with the Opals so they can achieve the goals they have set for themselves in Tokyo. We know they are totally committed to achieving success in Tokyo and they will still bring a incredibly strong team to this campaign.”

A pivotal member of their past two Olympic campaigns, Cambage’s exit comes as a devastating blow to the Opals, and follows the withdrawal of NBA star Ben Simmons from the Boomers side.

The Opals are considered a strong gold medal chance behind favorites Team USA, with the two powerhouse teams due to face off in a final exhibition match over the weekend before departing for Tokyo.

The 29-year-old’s exclusion also leaves the Opals a player short for their Tokyo campaign, with Cambage one of 11 players named, and no reserve emergency players included in the squad.