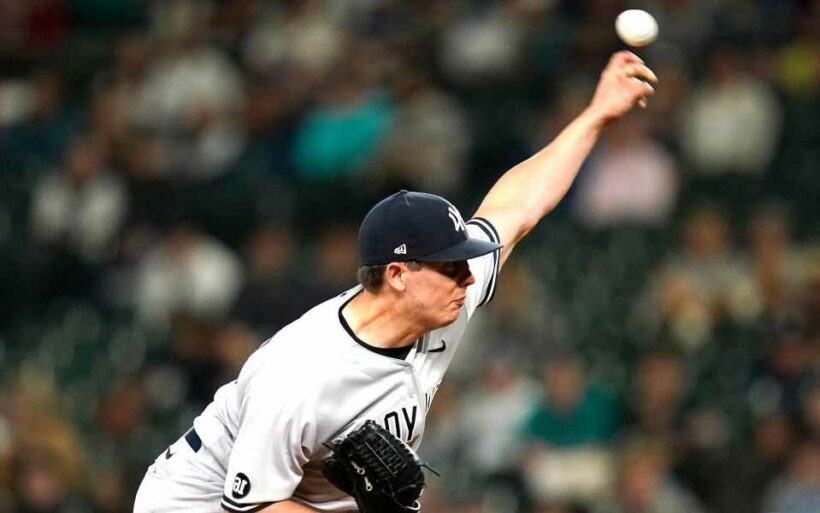 Yankees need this version of slugger to save season

SEATTLE — The Yankees looked like a dead team walking after Aroldis Chapman blew another game on Sunday in the first game of their doubleheader against the Mets.

It left the Yankees at .500 and staring at a potentially tough road trip heading into the All-Star break.

With Wednesday’s 5-4 win over the Mariners at T-Mobile Park, they’ve since won three straight for the first time in three weeks.

But they didn’t use Chapman to close the game, instead going to Chad Green in the ninth for the save.

After Jonathan Loaisiga tossed a scoreless eighth, Green was summoned in the ninth — on a night in which Aaron Boone said prior to the game Chapman was available.

However they got there, though, the Yankees will take the win, which was tougher than most.

Scheduled starter Domingo German didn’t start due to an emergency root canal earlier in the day, but he was one of five pitchers used to hold off the Mariners.

For a second straight night, the Yankees teed off on a Seattle starter in the opening inning.

On Wednesday, it was lefty All-Star Yusei Kikuchi.

After scoring three runs in the first inning on Tuesday courtesy of a Giancarlo Stanton homer off Justus Sheffield, the Yankees scored three runs again in the first Wednesday.

Aaron Judge and Gary Sanchez walked with one out before Luke Voit’s two-out RBI single. Gleyber Torres followed with a two-run single.

The Yankees could have had another run when Gio Urshela belted a shot to the gap in left-center, but it bounced over the wall for a ground-rule double, keeping Torres at third.

Brett Gardner was called out on strikes to end the inning.

Nick Nelson, making the start in place of German, was a mess in the bottom of the inning.

He hit the second batter he faced, Mitch Haniger, and walked Kyle Seager and Jake Fraley.

A wild pitch on the walk to Fraley scored Haniger to make it 3-1 and earn a visit from pitching coach Matt Blake.

A walk to Tom Murphy ended Nelson’s night after just two-thirds of an inning.

With the bases loaded, Luis Cessa came in and got Shed Long Jr. to ground to short to keep it a two-run game.

Tim Locastro led off the second with a grounder through the left side of the infield that the left fielder turned into a double — his first of two on the night.

Judge then blasted a one-out homer to increase the lead to 5-1.

It was Judge’s 20th homer of the season.

Cessa cruised against Seattle, which didn’t get its first hit until the fourth, when Murphy’s hard grounder up the middle hit second base and bounced into right field for a one-out single. Cessa then got Long to ground into a double play to end the inning.

The right-hander allowed just one hit over 3 ¹/₃ shutout innings, before giving way to German.

German tossed a scoreless fifth before the Mariners got back in the game in the sixth.

Haniger opened the bottom of the sixth with a chopper that a charging Urshela misplayed for an error.

German whiffed Seager and Ty France followed with a single. After German got Fraley looking, Murphy hit a three-run homer to bring the Mariners to within a run.

But German bounced back and retired the side in order in the seventh.

Loaisiga came on in the eighth, and after falling behind Haniger, 3-0, got all three batters he faced.

Boone then called on Green rather than Chapman, who had blown leads in three straight appearances before the Yankees brought him into Tuesday’s lopsided win and he walked the bases loaded with less-than-usual velocity.

Green was his typically dominant self Wednesday and struck out two in the ninth.