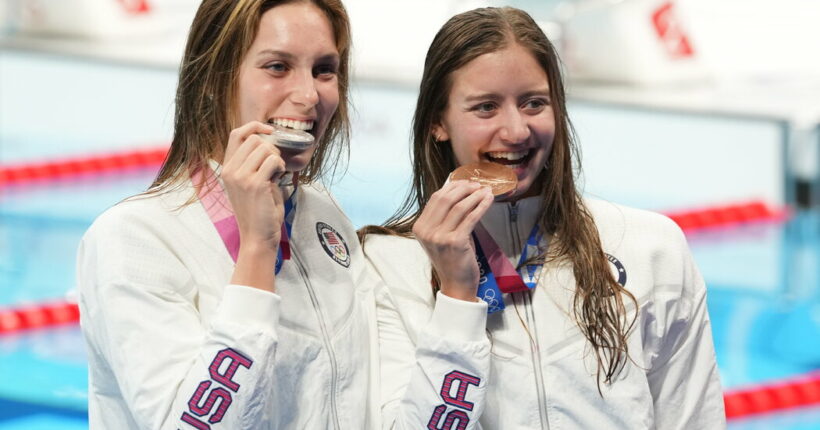 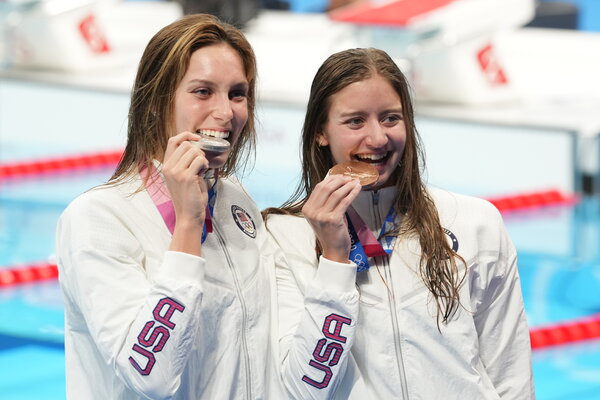 Why do they bite medals?

This isn’t a practice that’s exclusive to swimmers, of course. The short answer is that the cameras simply love the pose. Photographers and videographers are after what they consider to be a quintessential shot from the Olympics.

It can be risky, though. David Moeller, a German luger who won a silver medal at the 2010 Winter Olympics in Vancouver, famously chipped his tooth in his display for the cameras.

“The photographers wanted a picture of me holding the medal just with my teeth,” he told the German newspaper Bild. “Later at dinner, I noticed a bit of one of my teeth was missing.”

There’s a longer tradition behind that practice as well. It started during the California gold rush in 1849, when many people bit down on parts of the rocks they had just panned to test whether they were the real thing. Chomping on gold, a soft metal, will leave a mark. But that’s not what the athletes could be doing, right?

So, what are the medals made of anyway?

As you probably guessed from the last answer, gold medals are not made of pure gold. Remarkably, the 5,000 gold, silver and bronze medals for the Summer Games were made from metals extracted from electronic devices recycled by people across Japan, the Tokyo Organizing Committee says.

Why do swimmers wear two caps?

It creates less drag. To achieve that effect, they pair an inner latex cap with an outer silicone one. The first one is used to cover their hair, as latex clings to the head better. The second silicone one doesn’t crinkle as much as latex, so it smooths any lingering bumpiness on the head. Without the second cap, there is more drag in the water because the first one could wrinkle. This all could add up to a loss of valuable split seconds in a world-class race.

At the 2012 Games in London, the American swimmer Dana Vollmer’s outer silicone cap slipped off during the 100-meter butterfly final, but she still managed to win gold and set a world record.

Twin caps are also used for insurance on goggles. Putting the goggle straps between the first and second caps is as close as possible to sealing them in place.

Why do swimmers splash themselves?

It helps lessen that first shock on the body when the swimmer hits the cool water. Shocking the body just before mounting the blocks can provide an adrenaline boost. It also helps the swimsuit cling to the body. And swimmers are obsessed with reducing drag. Rightfully so, when hundredths of a second often determine the winner.