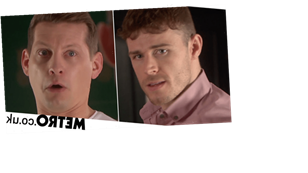 The residents of the eponymous village believe George to be the knight in shining armour they all need. However, viewers know full well there’s more to the copper than meets the eye.

Last year, George’s sinister side was revealed during a showdown with his ex, Dean (Paul Sloss).

What’s more, he deliberately made John Paul believe that he was dead in an effort to get revenge, after his beau had previously taken James Nightingale’s (Gregory Finnegan) side over his.

Yes, it’s becoming more and more apparent that George isn’t the man he appears to be, and it would seem as if poor John Paul is set to find this out the hard way.

The Channel 4 soap previewed what’s ahead in a brand new trailer, and upcoming scenes will John Paul, evidently terrified, backing away from his boyfriend.

Sinister George approaches him, before violently lashing out, and striking John Paul across the face — displaying no signs of remorse or regret, but simply intent on causing pain.

What will happen next?

That remains to be seen.