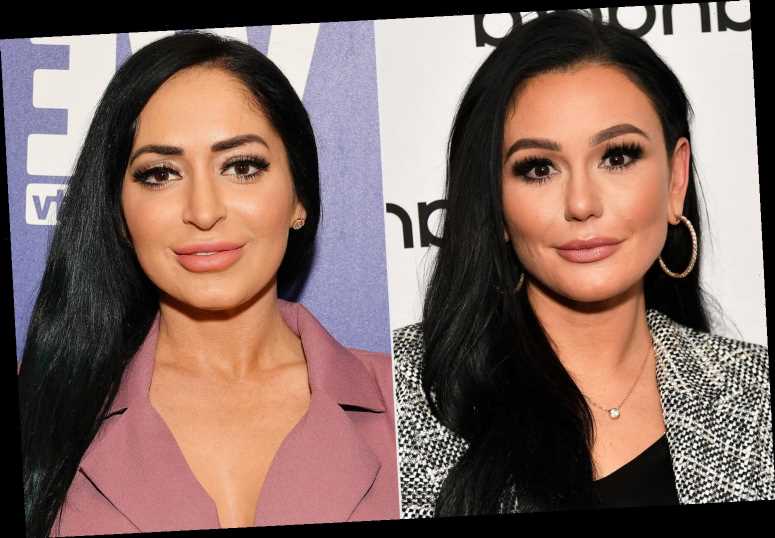 Angelina Pivarnick has squashed her beef with Deena Cortese — but Jenni "JWoww" Farley is a different story.

Thursday's episode of Jersey Shore: Family Vacation opened with Deena, 34, happily declaring she felt "10 times lighter" after putting her feud with Angelina behind her for good. Angelina felt similarly relieved, but she knew her relationship with Jenni was a different story.

The women had been at odds ever since Deena, Jenni and Nicole "Snooki" Polizzi delivered a now-infamous bridesmaid speech at Angelina's wedding in November 2019. (The drama that ensued pushed Nicole to quit the MTV reality show.)

Thus far this season, Jenni had been stuck at home in New Jersey, where she was recovering from a surgery. But on this week's episode, her doctor cleared her to travel, so she packed up her bags and flew to the sprawling Las Vegas resort where the rest of the cast had convened during the COVID-19 pandemic.

"I just really am excited to see everyone, except Angelina," said Jenni, 34. "I'll always be sorry for the speech because of the way that I thought I made her feel. But that doesn't give Angelina the right to say she can talk to me and it doesn't give my roommates the right to try and force us to have a conversation."

Deena was also feeling apprehensive — keep in mind that Jenni didn't know she had patched things up with Angelina — and Angelina's nerves were at an all-time high. Hours before Jenni's arrival, Ronnie Ortiz-Magro stopped by her room to check on her.

He gave her all the right advice: apologize, be the bigger person, avoid reacting and try to move on. But something about the conversation pushed Angelina, 34, over the edge. Emotional and angry, she stormed out of the room.

She retreated to a confessional booth, where she broke down in tears. "The f—ing girl is unpredictable," she said about Jenni. "I don't know what she's going to come in like. It's been 11 years of back and forth. This whole entire trip has been great up until this point but this girl always tries to sabotage it."

On the other side of the resort, Ronnie debriefed the guys on what had happened. "Ang just like, flipped out," he said. "She's lost it. She's officially f—ing lost it. I had to walk out of the room, bro."

"I don't even know if it was anger," he added. "It was more fear. Like, she was legit scared." Scared or not, Jenni's journey was already underway. Upon her arrival, Ronnie, Pauly "DJ Pauly D" DelVecchio, Vinny Guadagnino and Mike "The Situation" Sorrentino wasted no time bringing up the elephant in the room. They informed her that Angelina was there, and that she and Deena had already had a sit-down.

To their surprise, Jenni played it cool — and agreed to join a "family dinner" with everyone, Angelina included. But she insisted a reconciliation was off the table.

"I hope that whatever Deena chose to do with Angelina does not backfire," Jenni said in a confessional. "Because Angelina literally chose gasoline and she watched my s— burn. So I don't mind sitting around with Angelina, but I'll never give her a f—ing match again by becoming her friend or opening up that door. Not doing it."