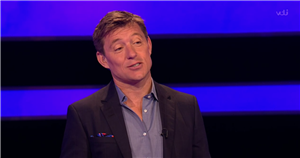 Tipping Point host Ben Shephard appeared to make a subtle joke to mock contestant John on the show this afternoon after he was called "intelligent".

Ben laughed alongside John as contestant Victoria was concerned about handing a question over to her competition after saying that he is intelligent.

John joked that he didn't believe people that knew him well would agree – and it seems Ben supported him on the statement.

He reminded Victoria that John didn't realise that there were two black Kings in a deck of cards, which saw them all chuckle.

It comes after John only managed to land one counter prior to entering the second round, which saw Ben tease him over not knowing the answer to one of the questions.

Viewers took to Twitter to join in, with one user writing: "Laughing at Ben with the banter," while another wrote: "It makes you wonder who the most intelligent person is."

When quizzed on a pack of cards, Ben asked him on the number of black Kings in a deck of cards, which saw John fail to answer two.

John did manage to land his one counter in the game as he answered "tie", for the answer "bow tie", but the green light by Ben.

Despite getting mocked by Ben, John was powering through the round and taking home a chunk of cash, but it wasn't quite enough for him.

Although Victoria did manage to land much more cash, she failed to answer as many questions right, but the counters were certainly playing in her favour today.

John had to empty his cash pot after leaving with £1,400, slightly behind Victoria, which meant she was able to get through to the final round.

She headed through with a game plan as she committed to picking her answers by going straight down the middle if she struggled to come up with an answer.

Victoria was able to walk away with £1,800 and the ability to take her son to Disneyland and chose not to take the trade with the potential to win £10,000 – or perhaps £20,000, as the double counter was also sitting incredibly close to the edge.

She was overjoyed to realise that, when she played the three counters to see what would have happened, she wouldn't have been able to get the £10,000.

Instead, she's taking home the £1,800 and even an electric scooter too.