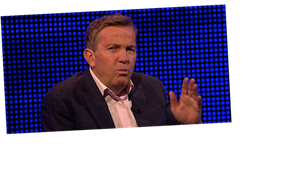 Bradley Walsh was lost for words during Friday's edition of The Chase as Paul Sinha pointed out that one of the contestants had previously appeared on a rival quiz show.

The 60-year-old presenter welcomed four new contestants to the show for the last episode of the week and was eager to see them get through to the final with some money in-hand.

Quiz champion Paul, aka The Sinnerman, was in the hot seat trying to prevent the hopefuls from going home with the cash prize.

However, things took an unexpected turn when Paul came face-to-face with contestant Cliff.

The player answered four questions correctly in his cash builder round, earning a total of £4,000.

However, before Cliff took on The Sinnerman in the head-to-head round, some information was brought to light about his quiz show past.

Paul, 50, quickly pointed out that he recognised Cliff from being on Mastermind and couldn't help but mention that he didn't do very well on the BBC quiz programme.

Bradley was floored at the news and called out Cliff for not telling him about his appearance on the rival television show.

The TV star asked: "Mastermind? You didn't tell me that bit. I'm meant to be your pal."

Cliff joked: "John Humphrys is my pal too."

It was later revealed that Cliff took to the famous black chair on Mastermind back in 2015 and his specialist subject was English rock and blues artist Eric Clapton.

Paul added: "You only scored eight though didn't you."

Cliff told Paul he was correct and that he was disappointed with his performance on the show.

The contestant later went head-to-head with Paul and managed to get through to the final round.

All four players made it through to the final chase but things didn't go to plan for the team.

They only managed to score 12 points in 60 seconds, and Paul caught them out with 43 seconds remaining on the clock.

Bradley offered his condolences to the team before they left the ITV studio empty-handed.

Speaking about beating the contestants, Paul told Bradley: "They were lovely team but lacked knowledge in the harder questions."

The Chase airs weekdays on ITV at 5pm