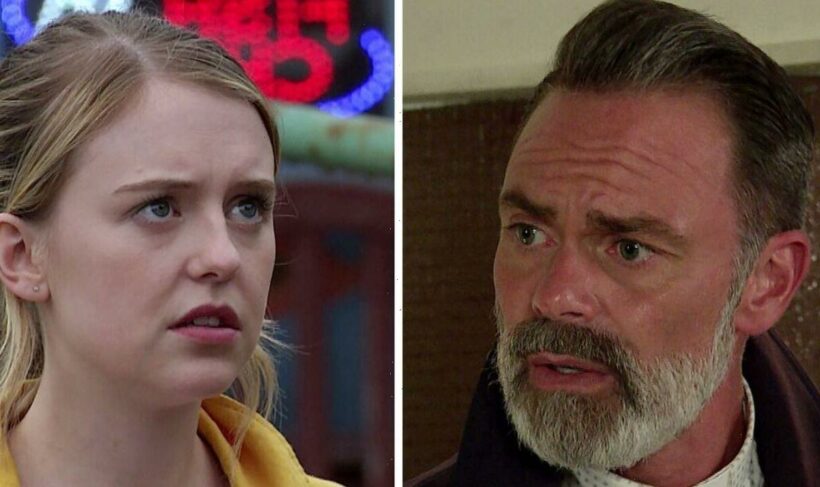 Coronation Street: Bernie gets stitched up by Fern

Coronation Street viewers have watched as pregnant teen Summer Spellman (played by Harriet Bibby) recently decided to keep her baby to give to Mike (Tom Lorcan) and Esther Hargrave (Vanessa Hehir) despite Billy Mayhew (Daniel Brocklebank) believing she’d had an abortion. In upcoming scenes, her secret may be about to get exposed.

Over the past few episodes, Coronation Street fans have watched as Summer struggled to decide what to do in her pregnancy with Aaron Sandford (James Craven).

Initially opting to have an abortion, it became apparent that her adoptive dad Billy strongly disapproved due to his religious beliefs.

Although he later decided to support whatever she chose to do, Summer didn’t end up going through with the termination, unbeknownst to her dad.

Her U-turn decision was also spurred on when Ester offered her money to keep the baby after she and her husband Mike have struggled to conceive.

Aware that her boyfriend Aaron needs £10,000 to send his dad to rehab, the pregnant teen informs Esther and Mike that they can adopt her baby but she’ll need 10k upfront to go ahead.

Thinking Summer has gone ahead with the termination, Billy is left concerned when he finds her throwing up in the sink and believes her eating disorder has returned.

In scenes set to air next week, Todd Grimshaw (Gareth Pierce) is taken aback when he discovers that Summer is moving out to live in the builder’s yard flat with Amy and Jacob.

Later on in the Rovers, Billy confesses to Todd that he believes he’s been far too overbearing with Summer.

Telling the teen that her dad is really hurt by her moving out, Summer speaks to Billy and has a heart-to-heart with him.

Speaking to her dad, she tells him how much she loves him and that she’ll miss living with him.

A theory by Express.co.uk suggests that when Billy sees Mike and Esther in the flat he quickly starts to put the pieces together and demands answers.

With Esther and Mike unaware that he doesn’t know Summer’s giving them their baby, they innocently inform him they’re checking up on the pregnant teen.

Furious, Billy storms out of the flat as Summer follows him having to explain the whole situation, leaving their relationship on the line.

Speaking about her character’s storyline in the ITV soap, actress Harriet Bibby admits it was best that Paul was the first person to find out about her pregnancy.

She said: “Paul finds it all out first and he’s probably the most understanding dad in the sense that he sees her as a young woman and he’s not constantly worried about her, unlike Billy.

“But then Todd and Billy find out and it’s just like panic stations, it’s kind of the opposite reaction, it’s all we need to make a decision.

“They want to figure it all out now rather than come to terms with it and let her make a decision in her own time.”