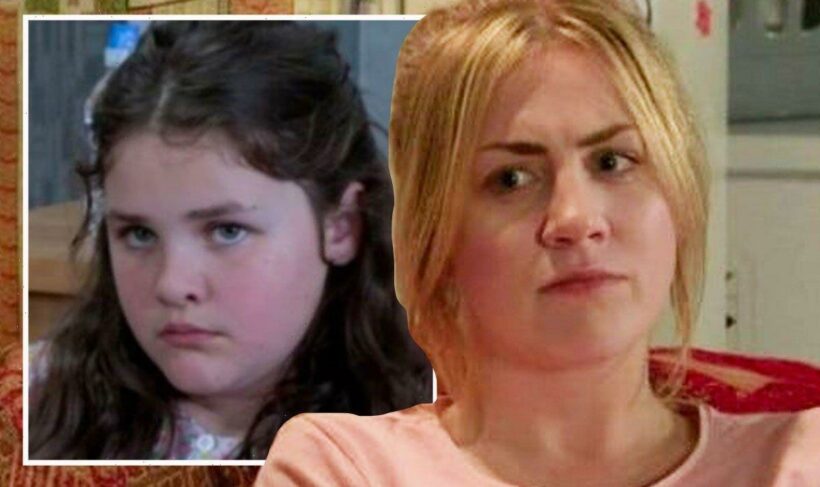 Corrie: Jade Rowan is confronted by police in teaser

Jade (played by Lottie Henshall) is the long-lost daughter of John Stape (Graeme Hawley), who was focal to Monday night’s instalment of Coronation Street as his youngest child Hope Stape (Isabella Flanagan) learnt just how evil her father really was. This was a conversation Fiz Stape (Jennie McAlpine) thought she would have when her daughter was older but her boyfriend Phill (Jamie Kenna) had compiled a list of research about the former villain which Hope stumbled upon. It seems the youngster’s life isn’t getting any calmer on the ITV soap and feeling she needs a break away from her mother, the schoolgirl could contact social services to say she wants to leave the family home.

The latest episode of the cobbles-based drama began with Hope taking the day off school as she claimed she was feeling unwell.

Phill offered to look after her for the day and told Fiz he would keep an eye on the youngster whilst he continued to renovate their new house.

When Hope’s tablet ran out of battery, he told her to play some games on his laptop but she came across a folder labelled Stape.

After reading all about John’s past, she caused some mischief by using the digger situated on the driveway and smashing the claw through Phill’s car windscreen.

This led to Fiz and Tyrone Dobbs (Alan Halsall) marching their daughter back to Weatherfield and they told the truth about her father after hearing how she’d found out about his crimes.

As they told her as much as they could, Phill turned up on Coronation Street to try and explain himself to Fiz but he still seemed naïve to the damage he’d caused.

He explained to his partner he had gathered the research for a true crime book he was going to write on her behalf to get her story across to the public.

Phill told Fiz how he’s been in contact with a journalist and how he was also thinking they could talk about her life with John on a podcast.

She told him she was going to move back in with Tyrone as she couldn’t let herself live with another liar who had completely thrown her feelings to the side.

Upcoming scenes will see Phill get down on one knee to try and get his girlfriend back, hoping they can still be a family.

Jade was a victim herself

With Fiz distracted by everything going on with Phill, she might not even have realised her daughter was making calls to social services.

An official could turn up on Coronation Street and explain to Fiz they are going to remove Hope from the household whilst they carry out their investigations.

The mother of two could be confused as to why her daughter is being taken off her but she could soon realise telling Hope about John has caused a greater impact than she would have ever thought.

Hope could have told social services her mother has been telling her horror stories about her father and she wants to live with her older sister, Jade.

The authorities could explain the youngster will be put into Jade’s custody for the foreseeable future as they try to determine whether the mother and daughter should live together.

Jade could return to the cobbles and rent a flat near the precinct so Hope could still have limited access to her mother.

This would also cause less disruption to Hope’s life as she could still attend the same school instead of being uprooted somewhere new.

John’s eldest daughter could be happy to make the brief return but if the social services were to grant her full access to her sister, she could make plans to move away.

Fiz would be heartbroken, knowing this could be the end of her life with Hope, having tried so hard to save it and hold on to it.

With the past destroying her future, will Fiz allow Jade to take Hope with her or will this be round two for the two women?

Speaking in an interview, the actress who played Jade, Lottie, addressed how she would like to see her character develop in the future.

The soap star said: “I constantly learned more about Jade all the time [I was on the show]. It was so exciting and surprised me.

“She wasn’t mentally ill, she was not a psychopath, she was a victim herself, she had a mother who lied to her for her entire life and she discovered things she didn’t even know existed.

“She made very bad choices as a consequence of her upbringing.

“I think some people’s opinion of Jade changed as the story developed. Some might have thought ‘Once a liar always a liar.'”

But as the custody battle for hope becomes more serious, will she realise she cannot lie her way through this?

Taking to Twitter, viewers have been calling for the villain’s return, with Evie writing: “Jade mention. Come back please Queen #corrie.”

Aaron added: “Dear @itvcorrie. While there’s a lot you’re doing right and I love the scripts, there’s one thing missing.

“You really need to bring back the daughter of Severus Stape, the mighty Jade. For a more expanded role. Or even squabbles with Evelyn. Please.”

“The Jade character will be a miss. Of course, the door has been left open for a return. #Corrie,” Ben shared on the social media platform.

Will fans be happy if she does make a return in the near future?