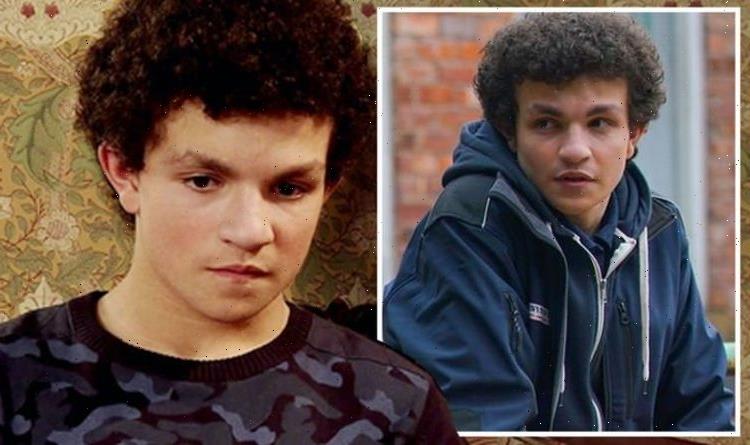 Corrie: Simon Barlow speaks to Kelly about his new job

Simon (played by Alex Bain) has been taking a backseat from the action on Coronation Street of late as his mother, Leanne Battersby (Jane Danson), tries to process the death of Natasha Blakeman (Rachel Leskovac). The teenager understands his stepbrother, Sam Blakeman (Jude Riordan), needs the attention at the moment as he tries to navigate his way through his grief over losing his mother to the drug lord, Harvey Gaskell (Will Mellor). However, the last time Peter Barlow’s (Chris Gascoyne) son faded into the background, he was groomed into joining Harvey’s gang, which has led to a year from hell for his family. As one of the gang members returns to the ITV soap, could this be the end for Simon?

When Simon and Leanne were strapped for cash earlier this year, the former did everything in his power to try and help with the finances.

He got himself a job as a delivery boy at the fish and chip shop and this is where he met fellow youngster, Jacob Hay (Jack James Ryan).

The young drug dealer recruited Peter’s son as a courier for the drugs by forcing him to do it as he would help Simon out with some money.

Leanne’s son was told he would have to pay back the cash and with not a dime to his name, he had to make a deal with the devil instead.

When Harvey arrived on the cobbles later in the year, Jacob vanished as it seemed he was punished for getting the Barlow boy involved as Leanne became a double-agent for the police to ensure her son’s safety.

However, in next week’s episodes of the weeknight serial drama, Jacob suddenly turns up out of nowhere now Harvey is back behind bars.

His comeback will tie in with Kelly Neelan’s homelessness storyline as she is approached by a drug dealer trying to sell some of his product.

The former prisoner knows she is at rock bottom and when the dealer persists on badgering her, Jacob comes to her rescue.

The youngster sends the dealer packing but newcomer Stu Carpenter (Bill Fellows) is not too sure about the teenager’s intentions.

It seems his reputation proceeds him and before Jacob has time to explain himself, he is also sent away from Kelly.

There was so much unfinished business

Given this is a fleeting appearance from a former character, it is likely he is going to crop up again in the future.

It could be Jacob will try to show those he has wronged in the past, including Simon and Leanne, he has turned over a new leaf.

Given their recent history with Harvey and how he killed Natasha, the pair won’t accept his apologies too quickly.

Instead, he will have to prove himself to them in order for them to forgive him for grooming Simon into the gang.

After giving him the cold shoulder for long enough, Leanne and her son could realise the youngster was put in a very similar position and was groomed.

This could all be part of a master plan to get closer to Simon, however, as Jacob could still be working for Harvey.

Being the drug lord’s associate on the outside, the youngster could take it upon himself to kill Leanne’s son for his betrayal.

As the teenager begins to confess his true intentions for returning to the cobbles, he could stab Simon in the middle of the street.

After months of being on the run and trying to leave his past behind him, it could the drug gang who take out the youngster for good.

It would be a cruel and heartbreaking way to see the beloved character leave the show after almost a decade and a half on-screen.

The actor who plays Jacob, Jack, has taken to his official Twitter account and teased what’s to come from his character’s returning.

Posting in view of his followers, the youngster wrote: “Jacob Hay is back. I can’t even begin to describe how chuffed I am to be back on those cobbles.

“There was so much unfinished business for Jacob so I can’t wait to tie up some of the loose ends,” he continued, possibly hinting at a showdown with Simon.

“I’m beyond excited to see what you guys think!! @itvcorrie #corrie,” he concluded but will he bring Simon’s time on the show to an end?

Or will Jacob be the one to die as Simon finally brings his drug gang ordeal to an end?