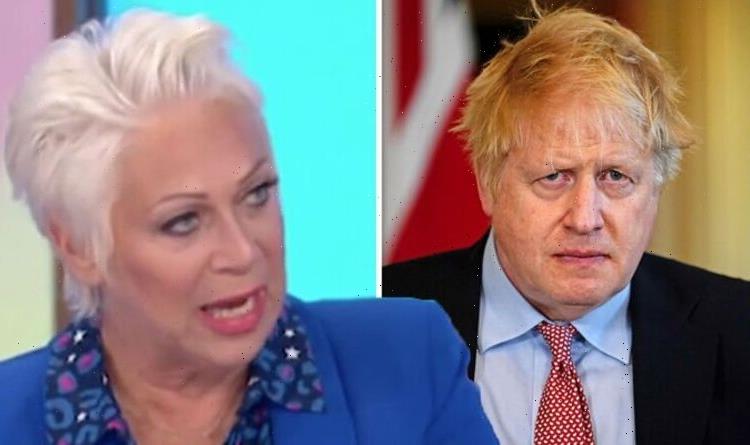 Loose Women host Jane Moore discussed the latest ‘partygate’ revelations with panellists Denise Welch, Katie Piper and Kelle Bryan on Wednesday. Boris Johnson, Carrie Johnson and Rishi Sunak all received fixed penalty notices for attending a birthday party for the PM in June 2020. Despite being furious at the scandal, Welch agreed with Johnson’s decision not to resign.

Sharing her thoughts on Johnson’s actions, Welch said: “Do I think he should resign? No, because I’ve said for many reasons over the last two years as far as I’m concerned it’s better the devil you know.

“I have no doubt and I’m not informed as a lot of people on the situation in Ukraine but I do believe he is doing the best job he can for that.

“However, this is not about that and I’ve always hoped that it wouldn’t be the dead cat, as they say, to go, ‘Oh look it’s horrendous, it’s terrible,’ which it is but we forget what was happening during Covid.

“The fact that Boris was at this one birthday party doesn’t escape the fact that these parties were happening all the way through Covid, through Downing Street of which everybody was aware.”

“No masks were ever worn, it was a different world out there.

“We talk about 10 minutes where people can come in and bring a birthday cake, well 10 minutes is also time that I could have gone and seen my father, who was left alone in lockdown because we were all following the rules.

“When I drove up in 2020, to what ended up being his last Christmas even though he wasn’t sick at the time, I drove up with a dry mouth up the motorway because I knew I was in danger of being arrested.”

“When we look back at the lunacy at what happened, people were arrested on beaches, they were walking on a fell on their own in Wales and threatened with arrest,” she added.

Stepping in, Moore remarked: “Playing devil’s advocate on this because we have to provide balance on this show.

“They were working together all these people were classed as key workers because they’re running the country.

“He’s sitting in the cabinet room, he’s been there the best part of the afternoon having one meeting after the other, it’s his birthday somebody brings him a cake which apparently didn’t come out of the box, a couple of people came in and went, ‘Happy birthday’. That could have been us.”

“We were on-air during this time, that could have just been you in your dressing room,” Moore said to Welch.

“Well, I would have welcomed it,” Denise hit back. “I thought the rules were ridiculous.

“I would have welcomed it but I didn’t make the rules for the rest of the country.”

Interjecting, Moore continued: “If you put it into the context of people at work, what interests me is… Operation Hillman, as it’s called, there are 12 other events that they’re still looking into and Boris is believed to have attended at least six of them. Now I wonder if this is the most innocuous one that’s been floated out at this point.

“When I read this I don’t get terribly over-excited about the fact that somebody gave him a birthday cake, in his office, on his birthday which he didn’t eat but I do wonder if there’s more to come,” she concluded.

Loose Women viewers were divided over Welch’s view as @Jill45885866 tweeted: “Denise, I agree with everything you said, well done for saying it.”

@KyleSew2112 disagreed: “I genuinely dread to think what Denise Welch is about to say #loosewomen.”

@kts64 wrote: “@itv_LooseWomen #denisewelch I have to agree with Denise I don’t think he should resign, but I do think he should have a hefty fine public got fined £200 government rule breakers got £50 that’s what annoys me, we can’t go back to past, or bring back loved ones, but we can move on.” (sic)

Loose Women airs on ITV on weekdays at 12.30pm.