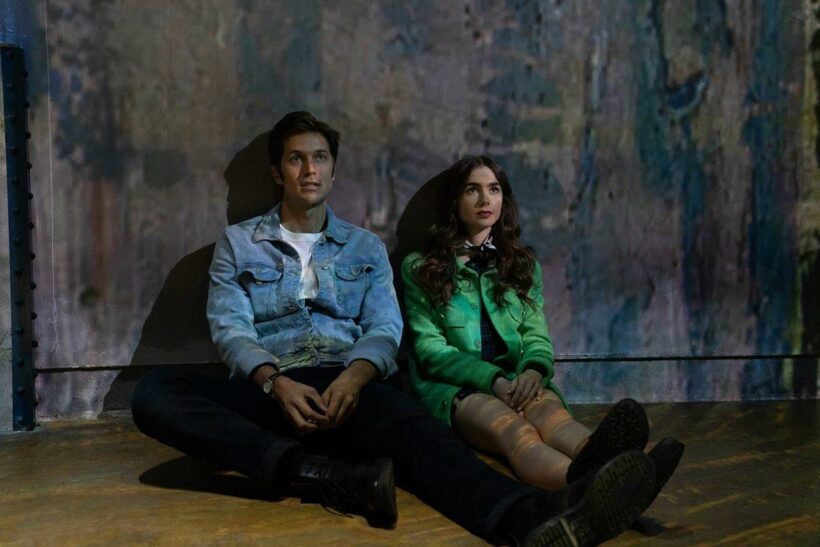 Emily in Paris Season 2 could hold the ménage à trois many fans have been waiting for. The season 1 finale set Emily up for some potential love triangle drama between Gabriel and Camille in the coming episodes on Netflix, but there also seems to be strong potential for the start of a throuple.

Many viewers pushed for a relationship between Emily, Camille, and Gabriel after season 1; even the cast would like to see Emily in Paris take that direction. Here’s what stars Camille Razat and Lucas Bravo said about a throuple.

[Spoiler alert: The following story contains some spoilers for the season 1 finale of Emily in Paris.]

Emily in Paris Season 1 established chemistry not only between Emily (played by Lily Collins) and her neighbor Gabriel (Bravo) but also between Emily and Camille (Razat), Gabriel’s girlfriend. Ever since Camille and Emily’s accidental smooch and Gabriel’s reaction to their flirty photo in bed, many fans have pushed for the three to end up together.

“Okay was I the only one who thought Camille was going to ask Emily if she wanted to be in a polyamorous/throuple with her and Gabriel? I was getting major bisexual vibes from Camille lol!” one Reddit user posted in 2020.

As it turns out, several others felt the same way. In the comments, fellow fans expressed disappointment that Emily in Paris didn’t take that route.

“Same! And so many hints that it was heading to that too!” one person commented. “Then I thought Emily may have started to have a secret thing with both of them! Fingers crossed for season 2!”

“100000000% thought that was going to happen. Camille deserved better!” another person added.

Some fans thought that Camille and Gabriel should have at least tried an open relationship with Emily involved.

“I think it would’ve been more badass to show an open relationship. They are becoming more common and are more readily accepted in progressive cities. Also, the Disney story of the perfect man followed by the perfect relationship is so trite,” another user wrote.

A throuple might not be entirely off the table for Emily in Paris Season 2. In October 2020, Razat and Bravo both told TV Guide that they could see Emily, Gabriel, and Camille together in the future.

As fans might recall, season 1 ended with Gabriel deciding to move away. As a result, he and Camille broke up, and he spent one last night with Emily. However, in a surprise last-minute decision, the chef chose to stay in Paris after all. The last few moments showed a text from Camille asking to speak to Emily. Uh-oh?

According to Bravo, there’s one good way to solve this love triangle: eliminate the need for Gabriel to choose Emily or Camille.

“There’s a good way to settle all of this, and maybe when there’s a conflict of interest like this, maybe just reuniting all parties would be a good solution,” he said in the interview. “We live in a free world, so maybe the sexual tension between Camille and Gabriel and Emily and everybody could bring [this] to something.”

Now, it’s worth mentioning that since that interview, Emily in Paris cast Lucien Laviscount as an enemy-turned-love interest for Emily in season 2. However, things are bound to get complicated, and showrunner Darren Star has long seemed confident that things aren’t over between Emily, Gabriel, and Camille.

“To me, a big part of the show is looking at everything through a different lens. Season 2 will open up some interesting and surprising relationship avenues,” Star told TVLine in 2020.

The season 1 cliffhanger left fans unsure if Camille knew about Gabriel and Emily’s affair and how she would react. However, Netflix debuted a season 2 trailer on Sept. 25, featuring Camille, Mindy (Ashley Park), and Emily on vacation together in Saint-Tropez.

It seems safe to say that Emily and Camille will be on good terms in the new season. Could the two explore feelings for each other during their vacation? What happens in Saint-Tropez…might not stay in Saint-Tropez.

Emily in Paris Season 2 premieres on Netflix on Dec. 22.