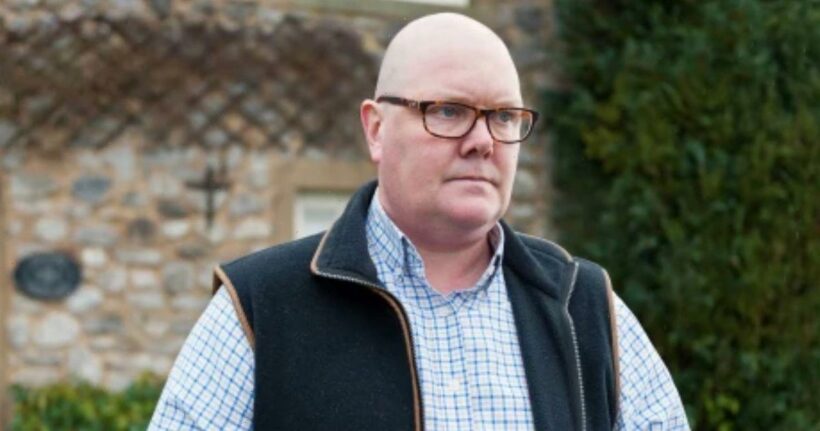 Actor Dominic Brunt has played loveable vet Paddy Kirk in ITV 's Emmerdale since 1997 and cemented his place as one of soap’s longest-running faces.

Over the years viewers have seen Paddy take on the father-figure to Chas' son Aaron Livesy, marry multiple women including Mandy Dingle, Emily Dingle and Rhona Goskirk and go through heartache with the loss of his baby with girlfriend Chas.

The pair have battled their own personal drama’s off-screen, including the terrifying heart surgery of their 8-month-old son.

As he continues to light up our screens on the long-running soap, let’s take a look at the star’s life off-screen…

Watching his baby son Danny be sedated and wheeled away to theatre, distraught dad Dominic has admitted he thought he was saying goodbye for good.

Little Danny had been diagnosed with a heart condition at eight months old and needed to undergo by-pass surgery.

Dominic and wife Joanne were told there was a chance the tot might not make it through the complex operation.

He told viewers on This Morning: "He had to go through major heart surgery at eight months, but he's fine now.

"It's the most horrific thing to have to go through as a parent but he's football mad now – he's completely fine – he has to check up once a year for the rest of his life.

"The people at Leeds Infirmary carry you through as parents because you don't know what you're doing and you're given this information and you have to go through it."

Dominic also admitted they were asked to consider whether they would donate his organs if the worst happened.

The couple agreed if their baby didn’t make it they would ensure his organs would help others.

Dominic says: “At the time it was horrific. You’re in the eye of the storm, it was horrible. You think you are going to lose your son.

:We discussed organ donation. It was brought up by a nurse because there was a mortality rate with the ­operation.

"We had to discuss it, but even before that we’d all agreed to be donors in the family – my sisters are nurses so it was how we were brought up.”

Despite having endured several failed on-screen marriages throughout his soap career, fans may not know that actor Dominic is happily married to fellow soap star Joanne Mitchell.

Domini met his fellow screen star wife when they were both studying at The Bristol Old Vic Theatre School, and just like her husband, Joanne is a film, stage and TV actor who has appeared in many shows over the years.

Her soap appearance was in 2003, when she played DS Karen Barnborough in two episodes of Emmerdale.

She also starred as Midwife Yeo and Susan Davies, and in 2016, took over the role of Sandra Flaherty.

Her other credits include Waterloo Road, Holby City and Doctors

The parents-of-two have undertaken lots of projects together, including co-founding Mitchell Brunt Films with her husband, with Joanne working as producer and writer on several of the company's films.

Despite hanging on to his role as Paddy Kirk on the soap since 1997, the actor has admitted he was left "shaking and sick with fear" that he would be axed from the show.

The 52-year-old actor said still worries that he'll get the cut each year when his contract is up.

He recently told The Mirror: “I’m a really big fan of the show and I’m very lucky. I’ve probably dodged a couple of bullets and I never ever take it for granted.

“When difficulties emerge on set I still get nervous. It’s a challenge. I don’t want to look like an idiot in front of six million people watching but I’m literally shaking and feeling a bit sick.”

He admitted that he suffers from “imposter syndrome” and will one day found out he has to return to his previous job as a welder.

“I still have that imposter syndrome, fearing I’ll get that tap on the shoulder and be told, ‘Dominic, we’ve found out you’re a welder – what are you doing here?’ I still feel like that.”

Although he's well-established character on the soap, the star confessed that he still has a wobble every December about this future.

He added: "Every Christmas when the contract is up, I still think that’s probably it.”