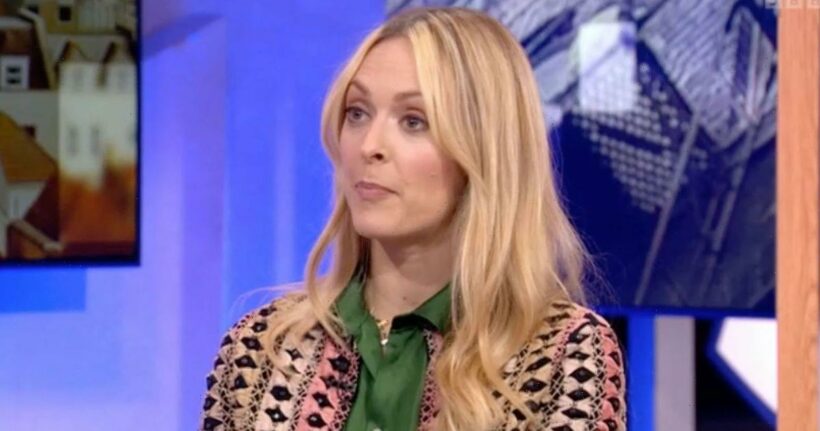 The One Show fans were delighted to see former Celebrity Juice star Fearne Cotton back on screens after she'd taken a break from being on camera.

Fearne, 40, made a rare appeared on the BBC programme to unveil her new self-help book with hosts Rylan Clark-Neal, 33, and Lauren Levine, 43.

During the discussion, the former Top of the Pops host opened up about her biggest fear – which was taking part in live TV.

The starlet explained she'd now only take part in television when "it felt safe".

Viewers of the programme were upset to hear Fearne's struggles and took to Twitter to offer up praise and support as they begged for her to make a return to screens soon.

One person wrote: "@Fearnecotton is lovely…#TheOneShow Note to self: Don’t dull down… powerful."

Another hailed the television star: "@laurenlaverne @Rylan @Fearnecotton @BBCTheOneShow Fearne was very interesting talking about mental health thanks, it's helpful hearing people talking about it as a sufferer of depression and anxiety myself."

A third tweet read: "How brilliant is @Fearnecotton on @BBCTheOneShow So relatable."

"@Fearnecotton isn't on the telly enough anymore. Sort it out!! #TheOneShow," begged a fourth.

While a fifth online user said: "@Fearnecotton Saw you tonight on #TheOneShow and you are AMAZING xx."

Radio DJ Lauren kicked of the discussion about Fearne's unspoken fear, asking: "You've described Fearne, being at a pivotal point in your life now and you talked quite recently about anxieties that you've been through and trauma that you've had, particularly around working?"

Fearne responded: "Yeah hugely because that was really annoying because not only do I love my job but I also need to have a job – like most other people out there.

"So I did have a tricky period where I had to sort of re-access everything and I've been really lucky that I've been able to forge little areas that feel very safe to me – like my podcast, or the work I’m doing with Happy Place, The Festival and writing feels very intimate and safe."

The ex Red Nose Day host went on: "But some of the other stuff that I used to do and probably more known for doing, I’ve had to sort of step away from for now and I would like to get back into bits here and there but at the moment it feels nerve-racking – it feels like a scary prospect so yeah, I’m doing things that I feel safe in at the moment."

Former X Factor singer Rylan added: "I mean you said and you were very candid actually about live TV because growing up you were Miss Live, you were everywhere. On all the shows, it was always live but you've said you've got a real big fear of doing live TV especially now, you're dipping your toe back in… I mean we're live now and we're here."

In response, the TV personality commented: "This feels no pressure because you're doing it… I haven' t got to have someone shout in my ear or counting, I feel relaxed and I love you both dearly, so I feel very safe.

"But yeah I think I did and it wasn't necessarily because of the job it was because of the nature of how we imbibe the reaction that we get from being on TV – and I found that so overwhelming that I started to dulled myself down in terms of how much of myself I would put out there and how happy I appeared.

"I was sort of just diluting my personality because I was so worried about reaction constantly."