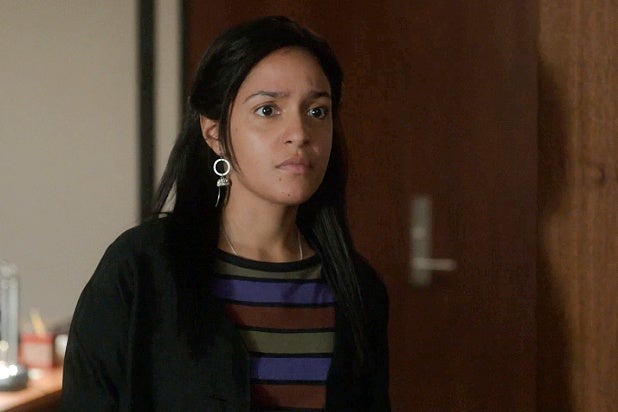 (This article contains spoilers for “And Here’s To You,” the eighth episode of Season Two of “For All Mankind” on Apple TV+)

The relationship between Margot (Wrenn Schmidt) and Aleida (Coral Pena) has been pretty much broken since the first season’s finale, when Margot opted to let Aleida live on the streets instead of taking her in. Since her father was deported, Aleida probably just never showed back up at NASA after that, and it took Margot ten years to do anything to try to make up for that horrific and selfish mistake.

While Margot is too prideful to admit the immense harm she caused Aleida — not surprising, considering how stubborn she is — she had at least managed to materially improve Aleida’s situation by hiring her on as an engineer at NASA. So that was something. But this week she handled a conversation with Aleida about as badly as she could have.

This week, Aleida had a rather tactless argument with another NASA engineer, Bill Strausser (Noah Harpster), in which Aleida brought up a painful memory — the time Bill peed his pants in mission control during a particularly stressful Gemini mission more than a decade before. Bill, devastated, quit his job that day.

Margot is, of course, correct to be upset with Aleida for making that insult. And then she orders Aleida to convince Bill to come back, or else she’ll lose her job as well.

Then, Margot takes it too far.

Margot: “I stuck my neck out for you. You owe me at least–“

Aleida: “Don’t tell me to calm down! You don’t get to tell me anything, ever. If you wanna fire me, I don’t care. I don’t care!”

Aleida: “What? Stand up for myself?”

Margot: “That’s why you’ve been fired from every job you’ve ever had. The going gets tough and Aleida gets going, right?”

This is an absolutely cruel thing for Margot to say to Aleida, who had the sort of rough time over the past decade that Margot could never even fathom. Living on the street, dumpster diving for food. And she had to live that life because of Margot. Aleida could have had a much better life. Instead, she experienced a decade of trauma and suffering. But Margot can’t acknowledge that. She has to act like Aleida is just some misbehaving kid.

Perhaps the most annoying part of this is that, in this story, Margot’s tack apparently works. Aleida gets the message, goes to talk to Bill, opens up to him in a way that helps him understand why she is the way she is, and they become friends. And, presumably, Bill will return to NASA so Aleida can still be on the show.

Now, I don’t know how this deal with Aleida and Margot will play out over the remaining couple episodes of this season of “For All Mankind.” Maybe Margot will finally get what’s coming to her — an immense humbling, at minimum. But I’m worried that won’t happen, because that conversation in Margot’s office was a big ole cliche.

We see this story beat a lot in stories across all media. There’s a problem character who has a hard time getting along with people, and then another character yells at them about how they need to get over whatever their issues are. Margot’s particular criticism of Aleida — “the going gets tough and Aleida gets going” — is itself a common subgenre of this tough love trope.

The trouble here is that we know why Aleida is like this. She was abandoned by everyone she knew when she was still a kid. Her dad was deported, her aunt’s family was evicted from the apartment Aleida was supposed to live in and left without telling her — and there was a person who could have helped her, either by adopting her or just by giving her money, and chose not to.

And that person, Margot, now has the gall to dress Aleida down for showing the signs of trauma that Margot could have helped her avoid.

Yes, Margot didn’t know that teenage Aleida would end up on the streets immediately after she asked Margot to adopt her. As far as Margot knew at the time, Aleida did have a place to stay then. But then I guess Margot spent the next ten years not checking in.

But what I worry right now is that the show itself thinks Margot treated Aleida correctly. That the angry Latina can just kinda get over that bad decade if she gets some tough love from a white lady. That the right combination of harsh words and a condescending tone from the person who caused so many of her problems is all Aleida really ever needed to hear to deal with her emotional issues.

Hopefully that’s not what “For All Mankind” is doing here with one of the few characters of color that has ever been on this show.