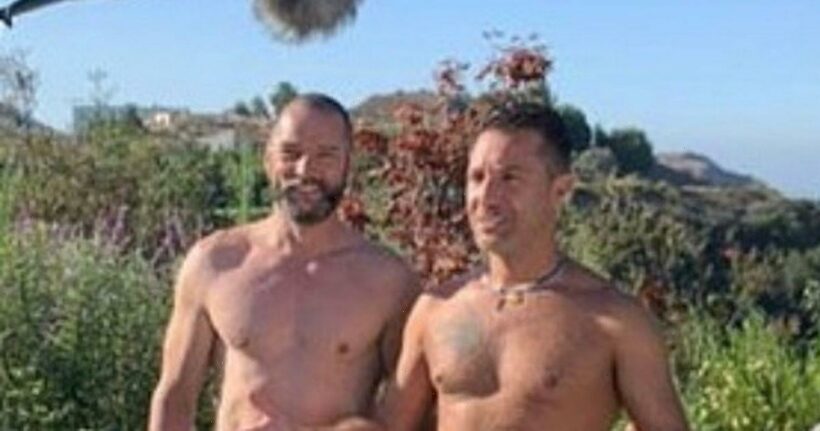 Fred Sirieix and Gino D’Acampo stripped down totally naked for a new TV show set to send temperatures soaring with fans of the hilarious TV stars.

First Dates’ French waiter Fred, 49, and Italian TV chef Gino, 45, showed off their bodies in a hilarious Instagram snap on Friday, January 14 as the crew were left less than impressed.

In the photo, what appeared to be the director and her assistant grimaced and gritted their teeth as they turned for the camera.

Despite their awkward expressions, Fred and Gino couldn’t have been having a better time as they grinned and giggled away next to each other in the baking sunshine.

Clearly abroad in sunnier climes, the dynamic duo will be starring in their first TV show alone since their road trips with chef Gordon Ramsay.

The backdrop was a stunning array of mountains and foliage with the sea glittering in the distance.

Gino held his arms out wide as if he was showing off his modesty, but it was pixelated out on both him and Fred for the Instagram post.

“Appearance can be deceptive and so we must never judge a book by its cover (or lack of),” French star Fred joked in the caption.

He then insisted that while his followers would likely believe otherwise, the pair were taking their filming responsibilities seriously and being professionals.

“Despite what some might say IT WAS WORK,” Fred teased.

Desperate to know what the presenters had cooked up next, one follower posted in the comments: “O.M.G…..what you up to now, you two?”

“as I was tucking into my egg and sausage…this photo popped up,” another fan exclaimed.

While another person joked that their third musketeer, Gordon, must have been too “chicken” to take part in the latest project.

“What has Gino got you doing now Fred?!!” a fourth fan demanded, followed by: “Can't wait to see you back in my screen.”

While Fred was proud to show off their latest antics, Gino is yet to put the image on his own Instagram page.

Fans will have to wait and see what the double-act’s new TV series is.

For all your latest updates on Fred Sirieix and Gino D'Acampo, sign up to OK!'s daily newsletter.