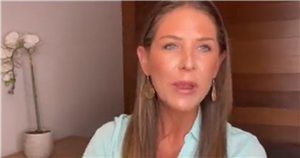 A controversial Good Morning Britain left fans fuming as she argued it is "selfish" for elderly people to own a pet dog.

During the hit ITV news programme, Susanna Reid and Adil Ray opened up a discussion on the heavily debated topic, which sparked novelist Jilly Cooper to reveal how she intends to get another furry friend at the age of 84.

Columnist Lara Asprey joined the show to argue against older animal lovers from investing in a pet dog as they approach the “later stages of life.”

The reporter warned against welcoming a perfect pooch into the home because of the emotional and physical welfare of the animal should its owner pass away unexpectedly.

She argued: “You have to be considerate to the dog, it needs to have a home it can live in for its life too. It's a sense of responsibility.”

Laura went on to share her confusion as to why pensioners desire to have sole responsibility over the animal and suggested they could club together to share ownership of the furry pooch.

“I think the elderly could, if they wanted to, share a dog, borrow a dog, or just have an arrangement with a friend or family member before getting a dog to say if anything happens to me, will you be its guardian?

“Otherwise, I feel it’s not really fair on the dogs, it’s a bit selfish,” she added.

But 79-year-old guest Jan Lemming firmly disagreed with her view and emphasised the care taken into pairing up elderly owners with rescue dogs in shelters.

And it’s fair to say many of the viewers at home agreed with her as fans took to Twitter to share their thoughts online.

One user penned: “Absolute rubbish @GMB if it wasn’t for the fact that my elderly Dad had a dog after my mum passed away his would have been much shorter, it gave him the motivation to get out every day & get on with his life.”

Another argued: “If someone is fit enough to walk a dog, play with it, feed it and clear up after it then they should have one.

“Also an 80+ person doesn’t need a puppy but the likes of Battersea have older dogs that need homes, so people should stop being ageist.”