Rocky Dakota from Below Deck Season 3 shocked the crew a number of times, but second stew Amy Johnson said the real shock came when they learned she was telling the truth about her affair with bosun Eddie Lucas. “First of all, shock,” Amy Johnson told Showbiz Cheat Sheet in Jan. “And almost like, ‘I don’t believe you.’”

Lucas flatly denied the rumor and was viewed as a trustworthy crew member. Dakota on the other hand, jumped ship when chef Leon Walker was fired. Plus she flirted and dumped Emile Kotz and warred with chief stew Kate Chastain. So when Lucas finally came clean about the hookup, the crew’s jaws were on the ground.

Johnson admitted that her view shifted about Lucas when she learned of the hookup. “Unfortunately, I’ve learned a lot about Eddie’s character through that situation,” she said, reflecting mainly on how Lucas gaslighted Dakota. “But, I think everyone has a little side where everyone loves Eddie. Eddie is a great, likable guy. He’s really funny and wonderful.” 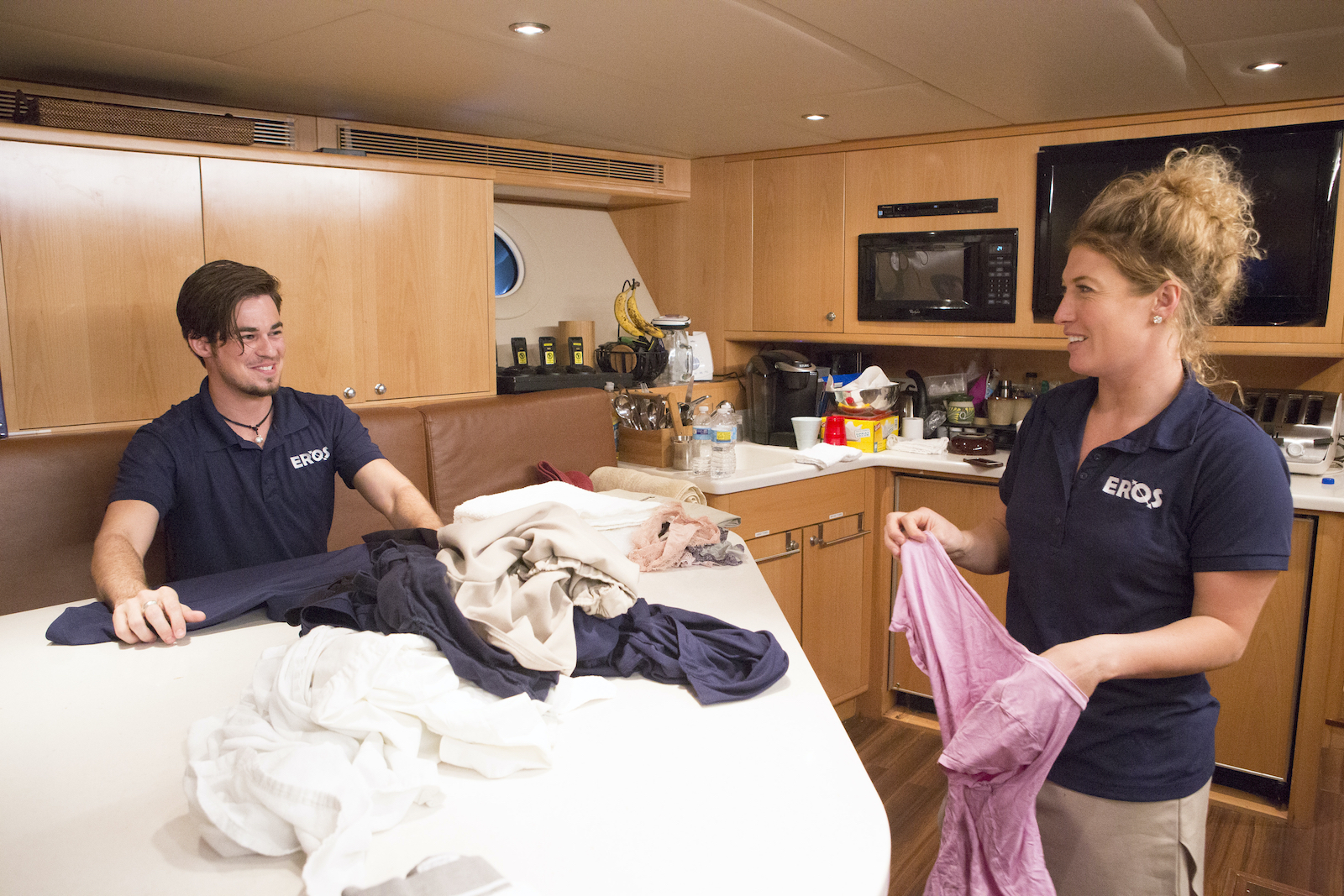 “And it was kind of like this, ‘I admire you and you’re a great guy.’ But season 3 I wasn’t at all ‘crushing’ by any means on my side of it,” she continued. “But I was shocked when Rocky told us because he had just been dissing her so much to the point where I’m like, ‘Okay, Eddie, like I know she’s tough to work with but …’”

Lucas and Dakota hooked up until suddenly Lucas realized he took the affair too far. Instead of discussing it with her, he ghosted her, which prompted her to start telling the crew about it. When the crew asked him about it, he lied and said it never happened. Finally, he came clean during the crew’s final night.

Why did Eddie Lucas deny the hookup?

Johnson said she could see how Lucas panicked though too. “It was very dramatic and he was I guess, frustrated with himself too because he had a girlfriend back home and but yet was hooking up with Rocky in the laundry room,” she reflected. “And I’ll tell you, they never made that mistake again. A camera in that laundry room from here on out!”

Lucas is also filled with regret about the entire scenario. He left the series and finally returned five years later. “I came back into it like, ‘You know, this is a good time for me to come back,’” he told Showbiz Cheat Sheet in Nov. about his return. “I’m in a good place in my career. My family is in a good place right now. They’re all healthy, they’re happy. And I’m in a good place personally, in my private life and everything. So I’m ready to dive back into this and show viewers that the mistakes I made on season 3 are not what define me.”

Johnson said the crew was probably in shock because Lucas denied the affair until the end. “I think it would have been a different scenario if he would have like owned up to it like, ‘Yeah we have.’ But I think that’s what all shocked us to had known him and worked with him for so long about,” she said. “We all make mistakes and we all make poor choices. And I think the pressure of having cameras on you, can you just do things that you wouldn’t naturally do in your own day to day thing.”

Lucas shared that he learned a lot from season 3 and was ready to move forward. “I screwed up season three,” he told Vulture ahead of Below Deck Season 8. “There’s no two ways about it, like, I screwed up. And it was appalling, my actions. I was thinking with the wrong head.”

“So this season, I was going into it with a mindset of being way more professional and taking my job way more seriously, but also my job as a boss,” he added. “Like, I needed to be a leader. I really wanted to set an example for the whole crew. I just wanted to go in and do the best job that I possibly can as the bosun of My Seanna. Having fun with it was also extremely important. Have fun with the crew, have fun with Captain Lee, and end strong. That’s what I wanted to do, is end strong.