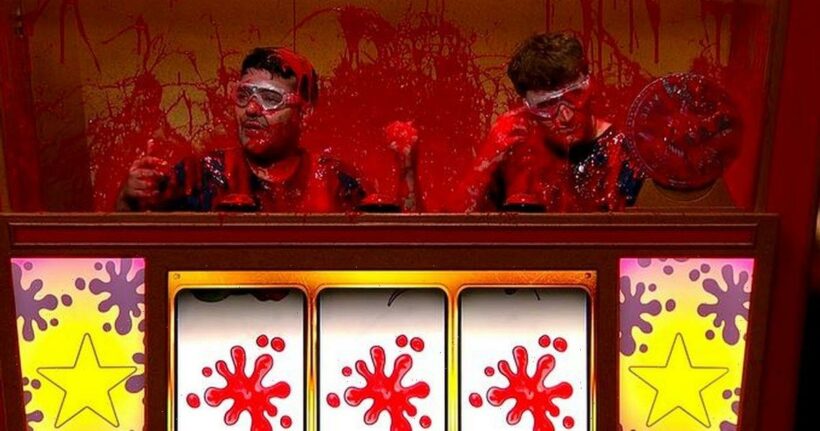 Naughty Boy is set to be joined by Matty Lee for Sunday night's Bucktucker trial on I'm A Celebrity, which will see them covered in red slime.

In a preview for the upcoming instalment of the ITV series, the two celebrities are placed inside a roulette box where hosts Ant McPartlin and Declan Donnelly tell them they will be covered in red slime.

However, while the music producer and Olympian are covered in buckets of slime, they must also attempt to catch gold coins in a bid to win the challenge.

The task proves difficult as the pair struggle to keep their eyes open while Ant and Dec encourage them to keep looking up to nab the coveted coins.

Naughty Boy then notes: "That's how an Olympic gold medallist does it" – prompting everyone to burst into a fit of hysterics.

This comes after Naughty Boy and Kadeena Cox clashed over rice during Saturday's episode of the ITV show.

Earlier this week, the DJ and the Paralympic Gold Medallist, 30, were assigned the roles of the camp's cooks by campsite leaders David Ginola and Danny Miller.

However, there appeared to be too many cooks in the kitchen on Saturday as Naughty Boy and Kadeena became embroiled in an argument.

Speaking about their lunchtime cooking duties on Saturday's show, Naughty Boy said: "We don't need to cook that now if we're not going to eat it… that's all the rice we have for tonight.

To which Kadeena replied: "Yes, because all the rice was cooked already."

Naughty Boy then responded: "There's no need to get like that!"

As they continued to disagree, Kadeena snapped: "I'm literally repeating myself a million times, and I'm tired, and it's a bit annoying."

Naughty Boy replied: "The reason you're having to repeat yourself is because I'm trying to understand what's going on. You don't need to get a***y with me, you really are. I'm speaking to you respectfully."

He angrily added: "I'm not getting respect back," as he walked away from the conversation.

Kadeena was left frustrated over the argument as she got into her bed and broke down in tears as she was comforted by her campmates.

I'm A Celebrity… Get Me Out Of Here! continues to air at 9pm on ITV and ITV Hub every night.