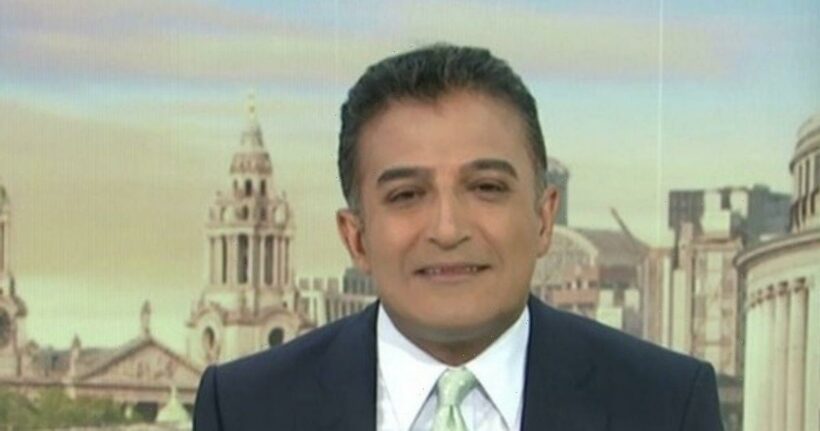 Since then, he’s been busy filling the shoes of controversial broadcaster Piers Morgan since his epic storm-off in March, usually alongside co-host Susanna Reid.

But that’s far from his only television credit, as Adil is also the co-producer and star of sitcom Citizen Khan, along with racking up acting credits in various other shows.

And away from the cameras, he lives a cosy life indeed with his pet pooches.

We take a look into Adil’s life away from the glare of the GMB cameras to find out what really makes him tick.

Though most recognise him for his early morning broadcasting slots, Adil made his name in his very own TV sitcom Citizen Khan.

The show, which featured Adil as Mr Khan, ran from 2012 to 2016, and focused on the hilarious goings-on in a cosy Muslim family.

Adil drew on his own experiences growing up for the show, telling the BBC: "Growing up in a Muslim family in the 1970s and 80s, I rarely saw families like ours on TV. I’m pleased to be able to put that right and share a bit of my culture with a wide audience."

He said he chose his home town of Birmingham for the setting "purely out of familiarity."

Adil added, “I think Birmingham is a very rich and diverse city. It’s a real melting pot, so I think it’s an obvious place to be.

"Plus, I think it’s about time we had Birmingham represented in TV comedy. You only ever see London or up North, so hang on what happened to the Britain in the middle?"

Since then, Adil has also starred in Channel 4’s Ackley Bridge, as well as period drama Beecham House.

Adil is also the presenter of TV quiz show Lingo, and has appeared on everything from Richard Osman’s House of Games to Have I Got News For You in the past.

Although Adil keeps his family life relatively private, he has opened up on Good Morning Britain about a heartbreaking family tragedy.

During a segment with former rugby star Mike Tindall, whose father suffers from Parkinson’s disease, Adil admitted that his own mum is battling the disease also.

"Mike, if you don’t mind, I am going to use this moment to talk about why it’s personal to me.

"I am a supporter of Parkinson’s UK and the reason I do that is because my own mother is a sufferer and I have never really spoken about it before, just to protect her.

"I just think, more and more, it's important we talk about it. I spoke to her last night and said, 'Look, I want to talk about your experiences' and she is very supportive of that," he continued.

"My mum, she started with a tremor, but her biggest thing is slowness. She's incredibly independent, but it's slowness and expression.

"Sometimes, it can look like they haven't got an expression – they're expressionless – although that's not necessarily the case, there's so many different things."

Adil has attended various fundraising events to raise money for Parkinson’s alongside his mum. In October 2019 the pair attended Buckingham Palace in support of the charity.

Following the event Adil shared a sweet snap of the pair clutching wine glasses and beaming at the camera with the caption, "Me and my Queen inside Buckingham Palace last week. Thank you once again @parkinsons.uk. Mum and I are delighted to be supporting all that you do."

Though it’s not clear if Adil has any pets of his own, he has been known to petsit one adorable pooch, Robin.

GMB producer Pip Tomson usually looks after the pet pooch, but while she’s busy with other commitments, Adil gets handed the reins.

The Cocker Spaniel mix is a survivor of the Korean dog meat trade, and speaking on Lorraine, Adil said: "He’s been with me, and it’s been nice because I’ve been self-isolating, so to have him as company is just lovely, and he’s adorable!"

Adil regularly shares snaps of the adorable pup to his Instagram page, and has shared various cute snaps of the duo cuddling up together.

Though known to rock a low-key suit and tie combo for his GMB stints, Adil does allow himself to funk with fashion a little in the form of fun socks.

He even has some pretty special socks featuring the faces of his ITV co-star Lorraine, and showed off a glam white pair of socks patterned with rows of her face.

"I’ll be on @lorraine today around 9.15. Last time I was on she gave me socks (I don’t always get socks on chat shows) but can’t wait to see what I get next? Underpants?"

Adil is currently thought to be single, and it appears it’s been that way for quite a while.

In one candid interview, he admitted he is "completely single."

The 47-year-old says he does eventually want to settle down and have children, and is looking for "The One."

"I’ve been single for a long time. When the first lockdown happened, I thought it would be okay because we’d be back out and dating by Christmastime.

"It’s frustrating. Even if you get introduced by somebody and you’re chatting to them online, how long do you do that for?"

Speaking to OK! Magazine, Adil said: "I think my career will always be a focus for me, but I also want the right balance with my personal life.

"Yes, one day that’ll be me settling down and starting a family. That’ll be fantastic."

Adil was awarded an OBE in 2016, and has recently become the first Patron for the new Screen and Film School in Birmingham.

With a £30,000 scholarship in his name, he hopes the grant will "open the door for someone who might think the film and television industry is closed to them."

That isn’t Adil’s only charity project, as he is also Patron for Acorns Hospice in the Black Country.

Posting a clip of himself outside the hospice building last Christmas, Adil penned, "As a patron of @AcornsHospice I feel very honoured to record this very special message this Christmas.

"The hospices are devoted to helping children with life limited futures and their families."