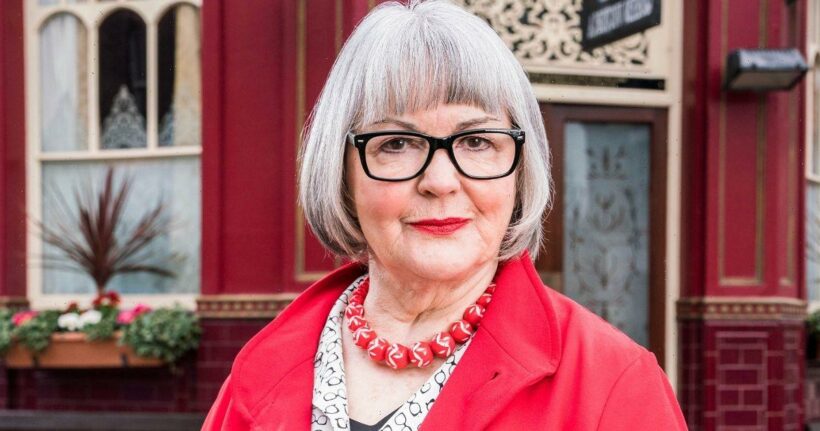 Gwen Taylor played killer Anne Foster in Coronation Street back in 2011 but has since made the swap to EastEnders.

The 82-year-old actress featured in 47 episodes of the ITV soap but Anne fled Weatherfield when she was revealed as the killer of her rapist son, Frank Foster.

She plays Vi Highway in the rival BBC soap now, who is Stuart, (Ricky Champ) and Callum's (Tony Clay) straigh- talking grandma who has "no qualms about putting the residents of Walford in their place."

After Patrick(Rudolph Walker) discovered a photo of Vi pregnant in recent scenes the secret came out that she gave up her son Christopher.

Vi explained to Patrick that her second son had Down's Syndrome and after she gave birth she decided to put him in care and hasn't had contact with him since.

Stuart reacted badly to the news and told Vi he was traumatised after his lonely years being left in care.

He was sure that it was her fault he ended up in care, not his fathers just because Vi wanted to keep Christopher a secret.

Stuart kicked Vi out and tried to find her but when he reached the train station it was too late, his nan had gone.

At the minute, it is unsure whether Vi will return to Stuart and Callum in Walford.

Speaking about when she first started in EastEnders in March, she said: “I remember when the first episodes of EastEnders launched and I was desperate to be in it, now after all these years, here I am playing a wonderful character.

"It’s fantastic and the cast are great, everybody has treated me so well and I feel extremely welcome.”

EastEnders Executive Producer said: “Having Gwen join the show is an honour, she’s the perfect actress to play the multi-faceted Violet Highway, a grandmother not to be messed with."

EastEnders airs Monday, Tuesday, Thursday and Friday on BBC One

Stay up to date with the latest news in Showbiz and follow your favourite celebrities by signing up for our newsletter by clicking here.