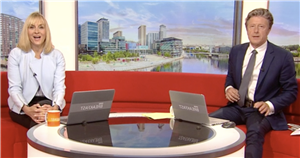 BBC Breakfast star Louise Minchin showcased her 20 years of broadcasting experience as she handled a technical glitch with complete professionalism.

The 52-year-old was trying to connect to her co-star Jane Hill who was airing from a school in Ramsbottom to celebrate the upcoming England Vs Denmark Euro 2020 semifinal.

When Louise first attempted to reach Jane on the live show, she was nowhere to be seen.

Louise said: "Hello Jane, hello, come in Jane," before realising there had been some kind of technical glitch.

"While we wait for Jane to organise everything – which she will be doing – shall we look ahead to tonight," added Louise who quickly cut to a clip to keep things moving.

Fortunately, producers did manage to get things back on track and Jane certainly delivered the goods.

The presenter had taken football star Kieran Trippier's old school and it's safe to say everyone was in high spirits for Wednesday's match.

The TV star was joined by PE teacher Lee Garcka at the school.

Addressing the children, Jane said: "You just don’t know the heartache that me and Lee have been through."

Turning to Lee, she added: "They have no idea do they?"

Back in the studio, in spite of the initial error Louise and Charlie Stayt were full of praise.

Louise beamed: "You spent a lot of time choreographing that."

"What ever happens they will never forget that morning," added Charlie.

Meanwhile, the BBC have released recruitment requirements as they kick plans in process to find a replacement for Louise who announced last month that she would be leaving the programme.

"The key role is to inform and entertain viewers with everything they need for the day ahead."