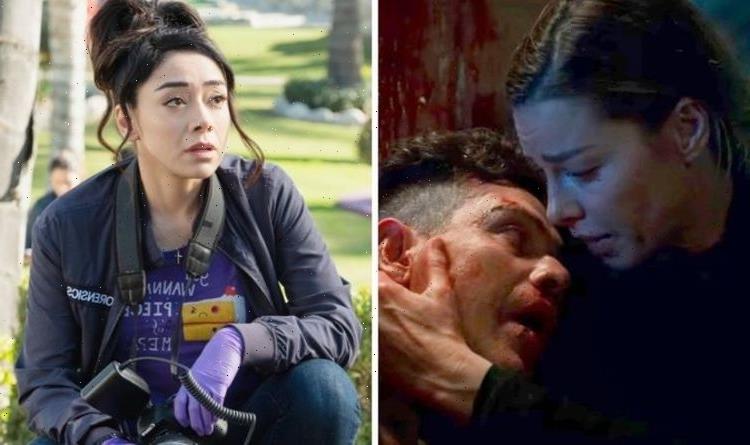 Dan Espinoza (played by Kevin Alejandro) may have been killed in the latest instalment of Lucifer, but it was his colleague Ella Lopez (Aimee Garcia) who was given the biggest challenge when it came to his funeral arrangements. Garcia has since revealed more about pulling off the touching duet with Tom Ellis at the eleventh hour for the Netflix series.

Aimee Garcia was put through the ringer for the penultimate episode of Lucifer’s fifth season.

After initially being given a month to prepare her duet with co-star Tom Ellis, the production was fast-tracked and Dan’s funeral was pushed forward by three weeks.

The long-running Lucifer regular recently opened up to TV Line about her last-minute rehearsals for the pivotal musical scene.

She explained: “I was asked, like, ‘Hey, will you sing at Dan’s funeral?’”

“And I said, ‘Look, I basically had a panic attack singing for the musical episode, but as long as you give me enough time, I can do it.’”

In the season five episode ‘Bloody Celestial Karaoke Jam’, Garcia had to sing and dance in not one but two massive musical numbers.

Thankfully she overcame her nerves, and she and the whole cast fully delivered on the special’s all-singing, all-dancing promise.

However, Garcia wasn’t expecting to step up to the plate for one last time for one of the last season’s most emotional moments.

To make things even more difficult, she was given just a few days to prepare when the filming schedule was given an unexpected shake-up.

Garcia recalled: “Cut to: Hey, Aimee, can you sing this song next week? And I was like what? I was totally freaking out.

“But I said, you know what? This isn’t about me. Put your ego aside, Aimee!”

As ever, the actress was spurred on by the show’s faithful community of fans and was determined not to let them down.

She also assured herself the performance wouldn’t have to be pitch perfect, as Ella is by no means a professional singer.

Unfortunately, complications arose when the song choice was suddenly switched to Boyz II Men’s cover of ‘It’s So Hard To Say Goodbye’ when Leonard Cohen’s ‘Hallelujah’ failed to clear.

“I full-on freaked out,” she told TV Line. “I went in the booth and full-on froze.”

To her credit, Garcia even decided to make her task more challenging when she decided to sing her part of the duet in Spanish, as both Ella and Dan are Latino.

Writer Jason Ning and the series co-showrunners Ildy Modrovich and Joe Henderson all signed off on the idea, and Garcia set about translating her lyrics.

Garcia said: “I will never forget them letting me sing in Spanish.

“They said that when they played the song for people, that all of the background artists and the crew were crying.

“So while I am no Kelly Clarkson, they gave me a challenge and I just did my best, to sing this as honestly as I can.”

‘Lucifans’ can testify Garcia rose to the challenge with confidence, and Ella and Lucifer’s tribute has quickly become one of the highlights of the show so far.

Lucifer season 6 will be released on Friday, September 10 on Netflix.