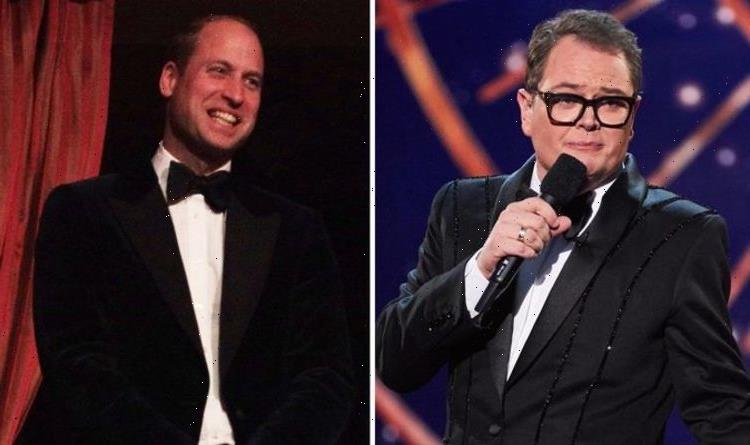 The Royal Variety Performance is an annual treat for both the Royal Family as well as ITV viewers at home every year. This time, it is the turn of Prince William and Kate Middleton to observe the proceedings which started with a dazzling routine from the cast of Moulin Rouge the Musical. While that segment got viewers feeling a little hot under the collar, presenter Alan Carr was aiming his sights on the Duke and Duchess of Cambridge.

Floating across the Royal Albert Hall to the stage, it was clear comedian and host Alan Carr wanted to make a big impression.

In his introductory speech, Alan greeted Prince William and Kate to the 150th anniversary night of the Royal Variety Performance.

He first spoke to Kate, telling the mum-of-three that she looked “absolutely beautiful”.

But Alan was quick to explain to her husband: “Sir, I am sure you do not know who I am but I am not hitting on your wife.”

The Duke and Duchess both let out a giggle as the comedian tried to tease the pair.

Kate appeared alongside the Duke of Cambridge in a stunning glittering emerald column gown.

The dress, which was created by designer Jenny Packham, is believed to be the same gown she wore during the Pakistan royal tour back in October 2019.

She attended the star-studded event with the Duke of Cambridge who wore a velvet suit with a black bow tie which really allowed her dress to take the spotlight.

The night may have only just begun but there have already been a few memorable acts to wow the audience.