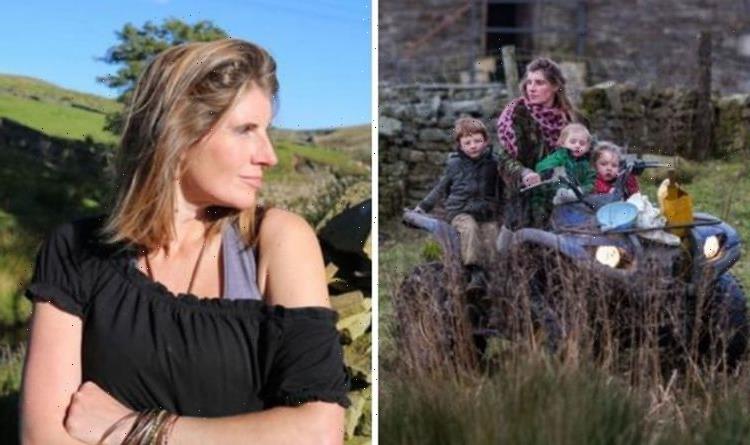 Amanda Owen reveals how she met husband Clive in 1996

Amanda Owen is also known widely as The Yorkshire Shepherdess since being given the title after Our Yorkshire Farm started airing on Channel 5. The programme documents Amanda and husband Clive Owen, along with their nine children, as they navigate life on one of the most remote farms in the Yorkshire Dales – Ravenseat. It first appeared on screens in 2018 and has since built up a huge following, but Amanda has slammed the name given to her in a recent interview.

Amanda and her husband juggle the immense farming responsibilities with their large family, who enjoy mucking in to help at any age.

As the family attract more and more interest, audiences of Our Yorkshire Farm continues to grow around the world.

The 46-year-old has been deemed The Yorkshire Shepherdess, which she uses as her Twitter handle where she frequently updates her 171.900 followers.

When asked if she gave herself the nickname The Yorkshire Shepherdess, the 46-year-old replied: “Absolutely not.”

Speaking to Simon Armitage on BBC Radio 4, she continued: “I mean, I answer to many things, I can assure you.

“I usually say Shepherdess, Sherper, and shovellor of – and I’ll let you fill in the missing word.”

Simon joked: “I’m good with words, I can probably supply that bit at the end there.”

Amanda has gone on to write several books about life on the farm, and keen viewers love to catch up on the latest goings on at Ravenseat.

When asked how she’d describe Our Yorkshire Farm, including what happens in the series, Amanda explained: “Do you know, the ‘what happens’ bit is a mystery to me because I’ve got to say absolutely nothing happens.”

She went on: “She went on: “I suppose in a way it’s a kind and gentle ‘soap opera’ but with no CGI graphics, no murder, no sex scenes anything like that.

“It’s just countryside, it’s the outdoors. it’s a farming family – my farming family, just going about our business, doing what we do.

“It’s down to earth, what you see is what you get and I can’t understand really why it has become the phenomenon that it has – it’s gone all over the world, Simon.”

Describing the location of the farm, she said: “If you picture it in your mind’s eye, it’s very – I always think Wuthering Heights.

The mother-of-nine continued: “It’s windy, it’s wet, it’s severe, it’s got its very own micro-climate, it’s a hard place to live and work. Am I selling it to you?”

Our Yorkshire Farm has been airing on Channel 5, but the latest series included a mid-season break.

Fans are eager to see it back on screens, and Amanda has recently reassured fans with a new update on when the series will be airing this year.

According to Yorkshire Live, Amanda confirmed the series will return “in the autumn” of 2021.

Amanda told the publication: “There is a new series coming. It will be in the autumn. I don’t know exactly when as I am the last person to know!”

Our Yorkshire Farm is available to watch on My5.