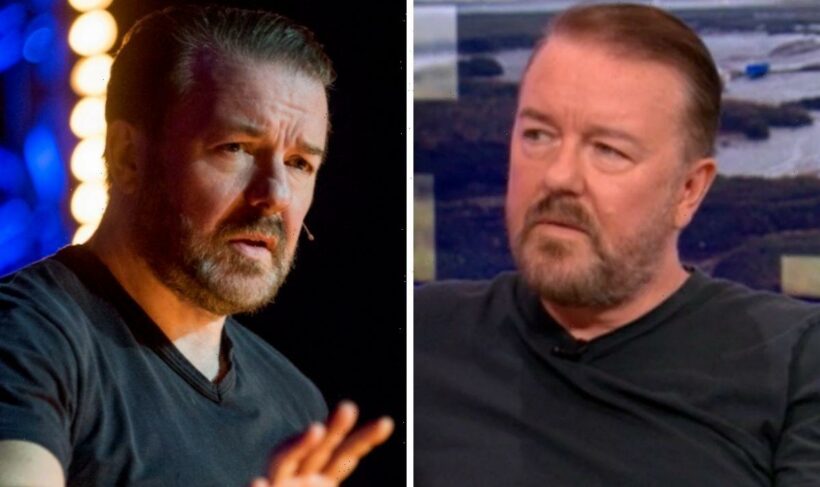 The One Show: Ricky Gervais talks about his taboo jokes

Discussing why he titled his show Super Nature, the comedian began: “A couple of reasons.

“One, I sort of debunk the supernatural through everything from religion you know, believing in crystals or fairies, all that sort of stuff.

“And I conclude that nature is super enough and we don’t need unicorns, we’ve got the octopus.”

He went on to say: “It is nature and humanity, warts and all. All the best and worst things about being alive.”

“It’s a privilege to be alive. You know, I say, we don’t exist for 13 and a half million years and then we have these 80 or 90 years if we’re lucky to then never exist again. So make the most of it.”

“That’s deep, isn’t it?” Alex asked before Ricky joked: “There are gags that aren’t so deep.”

After playing a clip from Ricky’s new comedy show, Jermaine praised the comedian for being able to create awkwardness and tension within the audience.

Discussing his controversial jokes, which have faced backlash in the past, the After Life star said comedy is to help people get through life.

“I think that’s what comedy is for really to get us through stuff and ideally taboo subjects because I want to take the audience to a place they’ve never been before even for a split second,” he explained.

“The most offence comes from when people mistake the subject of a joke with the actual target.

“So, it starts and they go, ‘What’s he going to say?’ I tell the joke and they laugh.

“It’s like a parachute jump it is scary, but then you land and it’s all okay.”

“That is what comedy is for,” the 60-year-old added. “Getting us over taboo subjects [because] they’re not scary anymore.

“So I deal with everything, you know and then I think we second guess the audience too much.

“Even in narrative stuff, like After Life, people are saying, ‘The audience take this’, of course, they can, real life is much worse.

“These are just jokes, they don’t mean anything, they’re just for you to laugh for a few hours or so.”

Alex went on to grill the comedian on why he talks about his wealth so much in his act.

“That can be really uncomfortable,” the host pointed out as Ricky replied: “They know what I am doing.

“They know, I’m taking the mickey out of it. I’m going there and it’s an elephant in the room.

“I go up with bad jeans, drinking out a can of beer because we are jesters.”

The One Show airs weekdays at 7pm on BBC One.