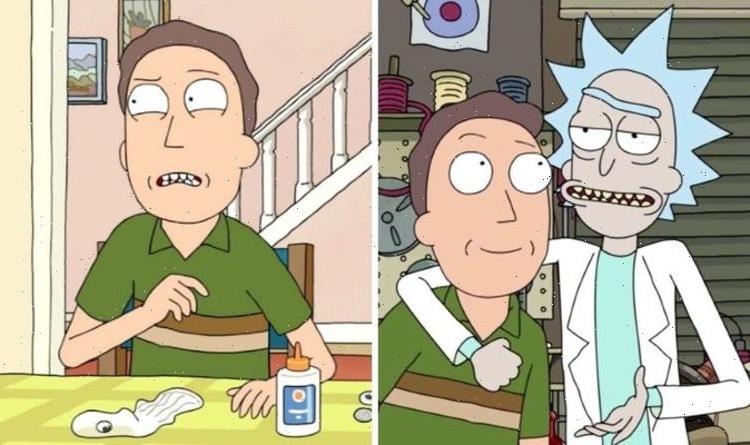 Jerry Smith (played by Chris Parnell) has been the cartoon comedy’s long-suffering punching bag since the very start of Rick and Morty. Although the next episode of the popular Adult Swim series could finally see Jerry and Rick (Justin Roiland) overcome their differences, some fans think the unhinged inventor has something much darker planned.

A promo for the next episode of Rick and Morty season five, ‘Amortycan Grickfitti’, has viewers scratching their heads over a shocking revelation.

At the start of the episode, it appears Rick has finally bonded with his daughter Beth’s (Sarah Chalke) cowardly husband, Jerry.

Rather than embarking on another inter-dimensional adventure, Rick and Jerry have declared Friday nights ‘boys’ night’ and are preparing to let off some steam together.

Their newfound friendship not only raised the suspicions of Jerry’s wife, but also drew concerned responses from fans who remembered previous Rick and Jerry-centric episodes.

Many viewers predicted the upcoming instalment could share some similarities with the season three episode ‘The Whirly Dirly Conspiracy’.

In this characteristically dark entry, Rick and Jerry’s trip to an intergalactic theme park is sabotaged by a group of alien assassins.

Not only is Jerry almost killed several times over the course of the episode, he also gets an earful from Rick about his ruining his relationship with Beth.

Down in the comments of the latest trailer for the series, fans immediately branded Rick’s friendliness towards Jerry as a cover-up for a sinister scheme.

One viewer even suggested: “I guess he’s finally killing Jerry.”

“Oh, no. Rick has something awful planned for Jerry, doesn’t he?” speculated another concerned fan.

However, the Smith family dynamic has certainly improved over the last two seasons after Jerry and Beth somehow managed to rekindle their marriage.

While Rick himself may not be out to cause his son-in-law more pain, his amicable behaviour towards Jerry has been taken as a massive clue that things will quickly turn sour.

Another fan said: “Oh boy Rick and Jerry alone for one on one time, I’m sure nothing horrible will happen to Jerry by the end of this.”

And another wrote: ”Rick being nice to Jerry in the promo, it’s almost like they’re directly telling us horrible things are going to happen to Jerry in the actual episode.”

So far, Jerry hasn’t been subjected to quite as much torture in season five as usual, although one of his decoys was put through the ringer in episode three’s post-credits stinger.

Rick and Jerry’s surprising Friday night plans could be a clear sign fans are about to witness one of Jerry’s darkest moments yet.

Commenters also noted Rick rifling through a box marked ‘occult items’, which Jerry could easily cause to malfunction, setting the stage for more sci-fi chaos.

Then again, Rick and Morty is constantly defying expectations, so there’s always a possibility their boys’ night will go off without a hitch.