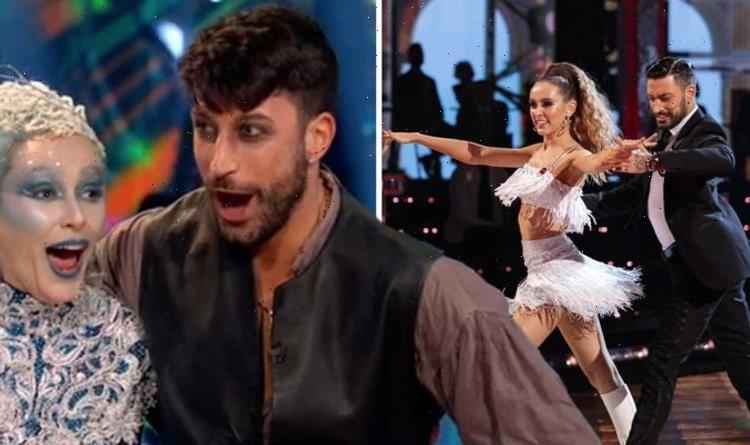 Rose Ayling-Ellis and Giovanni Pernice have been one of the favourites to win Strictly Come Dancing ever since they stepped out onto the BBC dance floor for the first time. However, as the EastEnders star progresses in the competition, new evidence suggests it could be a one-horse race for the Glitterball Trophy.

Giovanni has never won Strictly despite being paired up with some of the most memorable contestants over the years.

However, 2021 could be his year as the pro dancer and Rose continue to impress the judges.

Digital marketing agency Mediaworks has been tracking social media sentiment analysis since the series began to predict each week’s elimination.

The agency looked at whether celebrities are being spoken about positively or negatively as well as tracking any increase in followers.

Read more: Strictly’s Janette says former dance partner is ‘out of her life’

From September 14 to November 5, Rose has received the highest proportionate growth of followers on both Instagram and Twitter.

The EastEnders star has enjoyed a 670 percent increase in Instagram followers and a 686 percent rise in Twitter followers.

Could this mean she and Giovanni will be lifting the Glitterball Trophy at the end of the year?

However, Rhys has found himself in the dance-off in the past while Rose has yet to experience that dreaded fate.

Meanwhile, Tilly Ramsay – with an increase of 258,315 – has gained the highest number of Instagram followers out of her remaining co-stars.

The CBBC star’s partner Nikita Kuzmin has seen the highest Instagram growth among the pro dancers with a 364 percent increase.

Tilly and Nikita found themselves having to dance for survival for the first time at the weekend.

With Rose’s closest competition both having taken part in a dance-off, could this mean the EastEnders star’s victory has been sealed?

At the other end of the scale, Tom Fletcher, perhaps surprisingly, has the lowest percentage growth in Instagram and Twitter followers.

Elsewhere, bookmakers Ladbrokes have firmly tipped Rose to win but have reported an increased interest in Tom.

The actress is priced at 2/5 to win while the McFly star trails behind at 18/1.

Alex Apati of Ladbrokes said: “Rose may be running away with things in both the betting and the scoring charts, but interestingly there’s a large number of punters still banking on McFly’s Tom Fletcher to turn things around and take the Glitter Ball Trophy.”

“Meanwhile, it’s a title one unfortunate famous face has to hold, and it’s bad news for Dan Walker, who heads into the weekend as the least popular pick with punters to go all the way and win the series.”

Dan is tipped at 7/4 to exit the competition on Sunday while Sara Davies is close behind at 2/1.

Strictly Come Dancing continues on BBC One on Saturday at 6.40pm