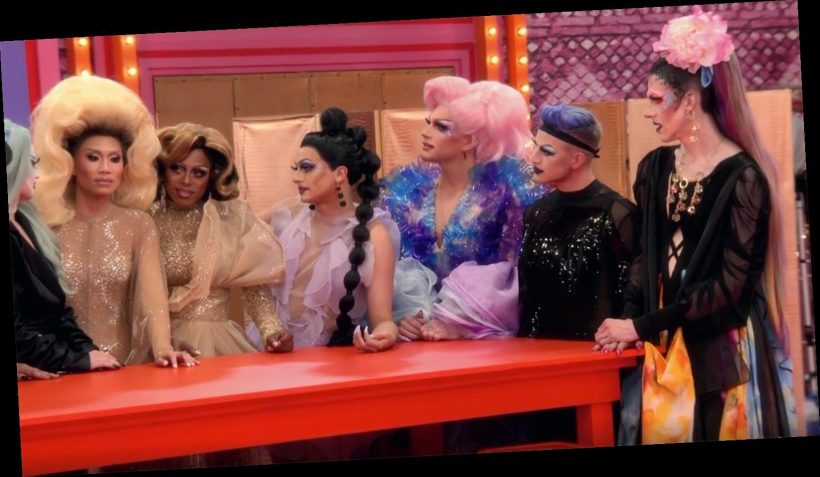 It's all been leading up to this: the moment when all 13 of the competing queens on this season of RuPaul's Drag Race — including Elliott with Two Ts! — come together for their first combined challenge.

In PEOPLE's eight-minute exclusive sneak peek, the new episode opens with the "winning queens" waiting for "the B squad" to walk into the workroom.

"It's going to be the face crack of the century!" declares Kandy.

The queens discuss how they think the big reunion of all the competitors is going to go, focusing specifically how the Pork Chop queens will react to finding out that Elliott has not actually been sent home. They then devise a plan to have Elliott hide from the "B squad" to add to the drama of it all.

"Hiding Elliott is so devious!" Olivia says. "This is so much fun."

In walk the Pork Chop queens to face the rest of the girls who, in Rosé's words, "are staring at us like f—ing predators." Tina wastes no time in publicly referring to the new group as the "B squad," which receives scoffs from the "new" group and mischievous giggles from the "A squad."

"If it isn't the 'anywhere-to-go-but-down' squad," quips Denali.

A few lively barbs are traded and then the convo shifts to Elliott, who saunters out at the most dramatic moment in the conversation. The Pork Chop queens are then put on the spot to discuss why they eliminated Elliott. (Delightful drama, of course.)

The cross-examination bit of tension is brief, and that opening scene ends with all the queens putting their hands together in a moment of season 13 solidarity.

Cut to a new day in the workroom, where the queens are all putting on friendly faces. Tina, who admits she "loves stirring the pot," takes control of the conversation topic to ask who in the cast is single, and let the flirting begin! But they're cut off by maxi challenge time. Ru arrives to explain the challenge and divide the contestants into three teams who will be acting out cheesy holiday movies, à la the "RuPaulmark Channel," and also notes that this episode will end with an elimination.

Watch the full clip above to see how each of the queens react to their new competition, who is on each challenge team and if there might be any wishful love connections brewing among the cast members.