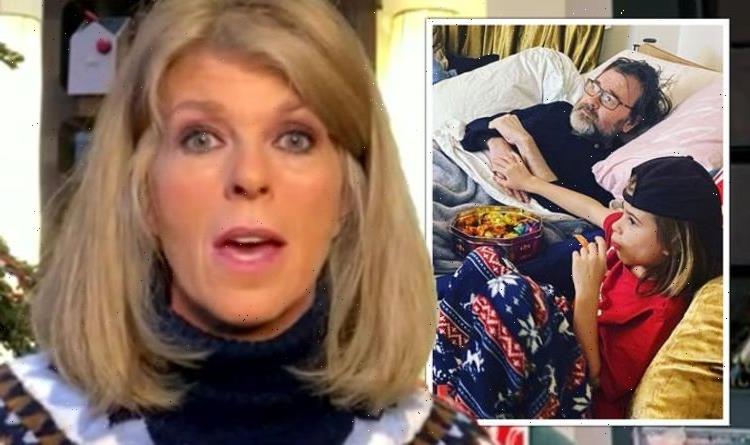 Kate Garraway was invited onto Tuesday’s instalment of Good Morning Britain to discuss being awarded an MBE in the Queen’s New Year’s Honours. After speaking with presenters Susanna Reid and Richard Bacon about the honour, she was asked about her husband Derek Draper’s health. The 54-year-old admitted her husband, who became seriously ill after contracting COVID-19 in March 202, is still “phenomenally fatigued”.

Kate explained to Susanna and Richard: “He’s very weak and the trip to the pantomime took everything out of him and he was not out of bed afterwards.
“He thought it was worth it and it was a special thing to be with the children holding their hands and doing something normal but it took everything out of him.”
A photograph of Derek in a wheelchair heading out with his family to a Christmas pantomime was then shown to ITV viewers.
Kate explained: “We don’t know what this year is going to bring, but he is there looking smiley and present.

“The speech wasn’t there that morning but you can see that he is aware that something special is happening.
“Before we left, I said, ‘You’re very tired, do you want to do this?’ And he said, ‘Yes.'”
Despite still struggling with his health, The Good Morning Britain host said Derek was “doing all right” in himself.

“It took a lot of organising. Big thank you to Anton du Beke.

“In fact, he came on to Good Morning Britain to talk about being in panto and I said, ‘Is it crazy to think I could bring Derek to panto?’

“This was obviously months before Christmas and he helped me organise it, which took a lot of organising. Thank you to the theatre as well.

“That was a big thing and as we were going in and sort of trying to manoeuvre him in, one of the people showing us our seats was in tears saying ‘Oh gosh, I can’t tell you how much it helped me, I was watching the documentary.

Derek was first admitted to hospital after contracting the virus in March 2020 where he had to spend months in intensive care.

He left hospital a year after being admitted and now requires round-the-clock care at home.

Kate has adapted her family home, which she shares with her son Billy and daughter Darcey, for Derek while he recovers.

Good Morning Britain continues on weekdays at 6am on ITV.