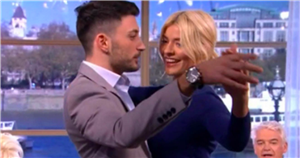 This Morning host Holly Willoughby is consistently named as a hot favourite to take to the Strictly dance floor.

And now the rumour mill is going into meltdown after the BBC show’s professional dancer Giovanni Pernice has said that he’d love to be partnered with the star if she were to sign up to show off her moves.

Speaking in a recent interview Giovanni and his fellow dancer Anton Du Beke were asked to pick an “ideal dance partner” for one other.

And the pair, who are preparing for their upcoming nationwide tour Him & Me, wasted no time in throwing some very famous names into the mix.

After Giovanni picked out former Bake Off star Mary Berry as a real contender to perform alongside his friend, Anton, 54, said: “Who would I pick for Giovanni?”

He continued: “If it was a same-sex partner… Luke Evans. Or, I know who would be great… Holly Willoughby.”

The suggestion went down very well with Giovanni, who revealed he’d love to team up with the mum-of-three in a bid to lift the famous glitter ball.

The 30-year-old Italian, who reached the final last year with partner Ranvir Singh, replied: “I would love to dance with Holly Willoughby on the show. We would have so much fun and she would do amazing.”

This isn’t the only time it’s been suggested that Giovanni and Holly would be a force to be reckoned with on the dance floor.

When Giovanni appeared on This Morning last year, Holly and her co-host Phillip Schofield began to quiz him on who his dream celebrity dance partner would be and what makes the “perfect partner”.

But before Giovanni could give the hosts his answer, Holly said the This Morning producers were already lining them up to dance together in a future series.

She laughed: “They keep saying in my ear ‘are they waiting for him to say you?’ – yes!” She then added with a smile: “You know I love the show, I am a massive fan.”

This comes after Giovanni opened up on the last series of the show and how he loved watching Good Morning Britain star Ranvir grow in ability and confidence throughout the competition.

Asked about his standout highlight from the most recent season during an interview with Gay Times, Giovanni answered: “Seeing Ranvir progress and improve was a highlight.”

“It was clear she had natural ability, but she worked so hard – and believe me, I can be a tough teacher – and it paid off.”

Could he work a similar magic with Holly?