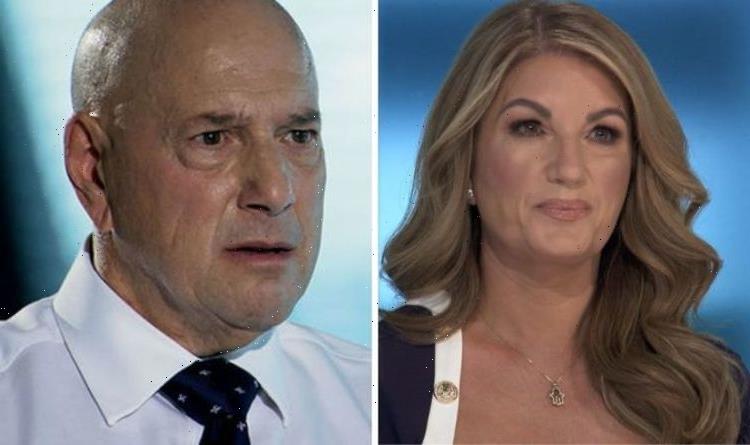 On Thursday, BBC viewers were thrilled to see The Apprentice back on their screens after being absent for two years. The show faced severe delays due to the coronavirus pandemic, although on Thursday, 16 news candidates were put through their paces in a bid to impress Lord Alan Sugar.

At the beginning of the programme, Lord Sugar addressed his colleague and friend Claude Littner’s absence.

Claude couldn’t take part in the current series of The Apprentice after he almost lost his leg in a serious cycling accident.

The 72-year-old has gone on to share he is “on the mend” and will back next year.

He continued: “My very good friend and business colleague Claude unfortunately will not be with us this series.

“Regretfully he had a nasty accident, and I’m sure we all wish him well.”

Claude’s fellow co-star Karren Brady, who has been on the show for 12 years, has since given an update on her friend’s health.

She went on to praise Claude’s replacement, Tim Campbell, who won the show in 2005.

Discussing Claude’s absence, Karren began: “We were so desperately disappointed that he wasn’t there, but we were much more concerned about how he was.

“He had this terrible cycling accident, which has seen him have a number of operations.”

Karen went on to add that Claude is luckily on the road to recovery and is, “almost back to his best”.

She added to the Daily Mirror: “But it was impossible for him – as much as he would’ve loved it – to take part in the series. So Alan turned to Tim.”

Fans rushed to Twitter on Thursday night to send their well-wishes to Claude and to share their disappointment at his absence.

Rachel penned: “Only just catching up with @bbcapprentice and it is just not the same without you at all!

“Your facial expressions spoke volumes, wishing you a speedy recovery though and hope you’re back next series for sure xx.”

User K tweeted: “Catching up on latest #Apprentice. SO happy it’s back but aw I miss @claudelittner. It’s an utter tragedy to be denied an acerbic Littner assessment of ‘The Logo’ and an accompanying eyebrow raise of disgust. Get well soon Mr Littner, ur missed!”

While Sally added: “It’s not the same without you!! I was actually looking forward to the facial expressions and the looks of disapproval lol..but I do await your commentary on here when it’s on lol.” (sic)

Claude has been vocal on social media and has reassured his followers he is feeling better.

“Thank you, Helen, back next series,” Claude said to one fan.

He went on to add that he was, “recovering well”.

The Apprentice returns on Thursday at 9pm on BBC One.