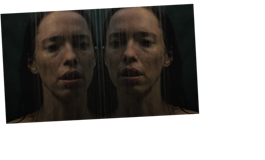 Something is haunting Rebecca Hall in “The Night House,” and it’s not just bumps in the night happening in the lakeside home that seems to be terrorizing her. She’s also haunted by her past, which is marred by a catastrophic incident of grief that’s mostly kept under wraps in the first trailer for David Bruckner’s new horror movie. This ghostly scarefest first premiered way back at Sundance 2020,and now finally drops in theaters this summer on July 16 from Searchlight Pictures.

Here’s the official synopsis: “Reeling from the unexpected death of her husband, Beth (Rebecca Hall) is left alone in the lakeside home he built for her. She tries as best she can to keep it together — but then nightmares come. Disturbing visions of a presence in the house calling to her, beckoning her with a ghostly allure. Against the advice of her friends, she begins digging into her husband’s belongings, yearning for answers. What she finds are secrets both strange and disturbing — a mystery she’s determined to unravel.”

Hall is joined by co-stars Sarah Goldberg, Vondie Curtis Hall, Evan Jonigkeit, and Stacy Martin. Searchlight scooped the film out of Park City for around $12 million. Filmmaker Bruckner previously directed the feature “The Ritual,” released by Netflix in 2018, and contributed segments to the omnibus horror movies “The Signal,” the original “V/H/S,” and “Southbound.” “The Night House” script comes from Ben Collins and Luke Piotrowski.

From IndieWire’s Sundance review of “The Night House”: “The film’s jump-scares are cruel and aggressive enough to cower you into submission. Bruckner… is a talented genre craftsman with a sick gift for endowing mundane spaces with sinister energy. Beth’s home is not a particularly expressive place — aside from some eerie bedroom windows, nothing about the house’s design betrays its dark foundations — but patient direction warps every corner with awful potential. And the film’s possessed atmosphere provides the architecture for some of the most brutal jolts in recent memory.”

The film’s star Rebecca Hall had a busy Sundance earlier this year with the world premiere of feature directing debut “Passing,” which sold to Netflix after critical raves.

Watch the trailer for “The Night House” below.