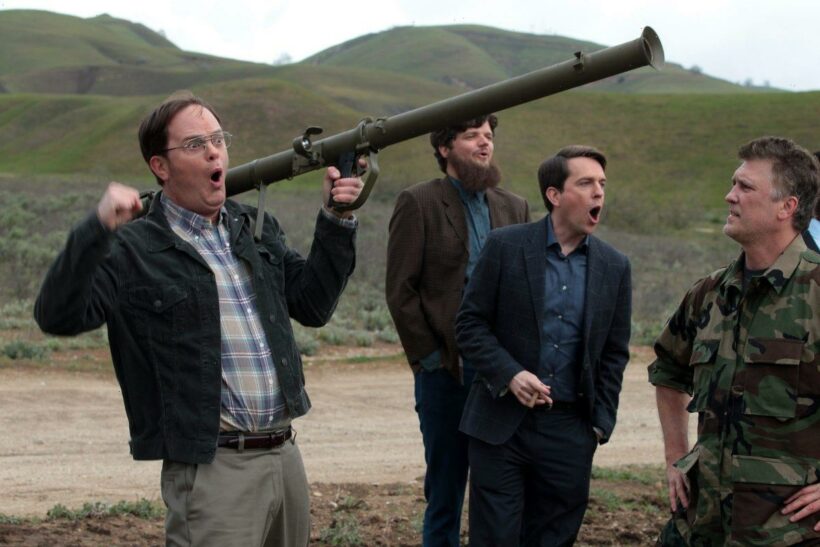 The Office‘s Dwight K. Schrute is one of the strangest characters ever to grace our television screens. Played by Rainn Wilson, Dwight is a version of a particular kind of relative, colleague, or acquaintance we’ve all come across in our lives. Whether you find him annoying, endearing, or a bit of both, it’s interesting to think Wilson’s unconventional childhood inspired such a funny and relatable role. Learn more about Wilson’s difficult childhood and how it inspired the man that is Dwight Schrute.

Wilson mentions being “raised by aliens, not wolves” on Office star Brian Baumgartner‘s podcast. But in the Sept. 16 bonus episode of The Office Deep Dive, Wilson explains that theory a bit more.

“My parents were world-class weird,” says Wilson. “I had a very fractured family and it was a difficult place to get raised. I did not have a wholesome, loving, familial unit.”

As Wilson describes, his mom was a “crazy hippie” who took off when he was two years old. He was raised by his dad, who had a traumatic childhood and ended up remarrying after Wilson’s mother left.

When he was growing up, Wilson’s home life wasn’t picture perfect. “We had on the surface what looked like a normal human family,” he continues. “It seemed like a family, but it really wasn’t a family.”

Their disconnect made it difficult for Wilson to figure out how he fit into society, adding:

Ultimately, that awkwardness has helped me play roles like Dwight because I’m good at playing misfits and outsiders and loners and weirdos. I play a lot of them — I’ve played a couple dozen. But it all stems from that really weird petri dish that I grew up in.

Paired with Wilson’s experience acting in theater, he became one of the most specific and beloved characters in the NBC comedy series.

As he discussed with Baumgartner, Wilson also did “a lot of clowning” and “work in physical theater” before his days on The Office. In a separate episode of Baumgartner’s podcast, Wilson mentions his acting studies, which involved “finding a character in his body.” This skill became extremely useful playing Dwight, who turned out to be a very physical character.

Dwight Schrute is a fan-favorite character from ‘The Office’

In that same interview, Wilson talks about why The Office fans are drawn to Dwight. “My goal was to make Dwight very specific,” Wilson says. “Having Dwight have a pager or stand a certain way, drive a certain way, sit in his chair a certain way — [I wanted Dwight to] have certain attitudes about certain things that are very specified.”

Dwight Schrute is a heavy metal-loving, muscle car-driving Battlestar Galactica nerd. The specificity of these details is what makes the character so appealing to so many.