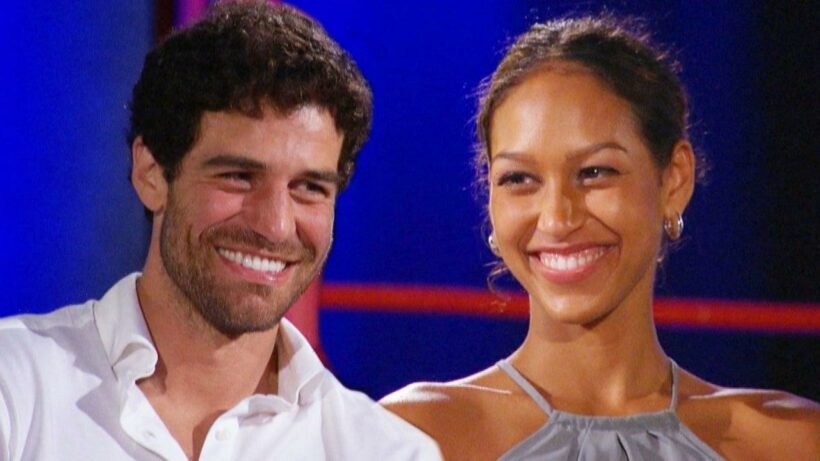 Has Grocery Store Joe finally found love? In an exclusive sneak peek of Monday’s upcoming episode of Bachelor in Paradise, Joe Amabile and Serena Pitt take things to the next level on their one-on-one date.

In the exclusive clip, Joe and Serena arrive at an auditorium that’s set up with a fancy table set for dinner inside of a boxing ring.

“Want to fight each other later?” Serena jokes. “We can wrestle,” Joe quips in response.

“I did too,” Joe replies of coming to Paradise for a relationship. “The reason I did stay is because I liked you and I thought there could be more.”

In a confessional, Joe goes even further, stating, “I’m 100 percent, all in on Serena. I could potentially fall in love with her.”

Just as the romance begins heating up, a bell loudly rings in the auditorium and lights begin to flash, signaling the start of the second part of the date. “Unfortunately,” Joe says, “I forgot I’m on a wrestling date.”

Joe and Serena hit it off from day one of Paradise, though Joe left their initial conversation, stating, “I never cease to amaze myself. I just can’t believe how awkward I can be.”

Things turned a corner when Serena pulled Joe for another conversation, noting that, despite his awkwardness, she got “fiesta flutters” during their first talk. Things flowed naturally from there, with the pair playfully flirting with each other.

The budding romance appeared to be in trouble in episode three, when Serena accepted a date with a new arrival, Thomas Jacobs. After Joe spent the whole day fretting, Serena returned from her date and revealed that she only had eyes for the former grocery store owner, a feeling that appears to continue into next week’s episode.

Bachelor in Paradise will air two episodes next week, on Monday, Aug. 30 and Tuesday, Aug. 31, on ABC. Check out all of ET’s coverage for the latest drama on the beach.