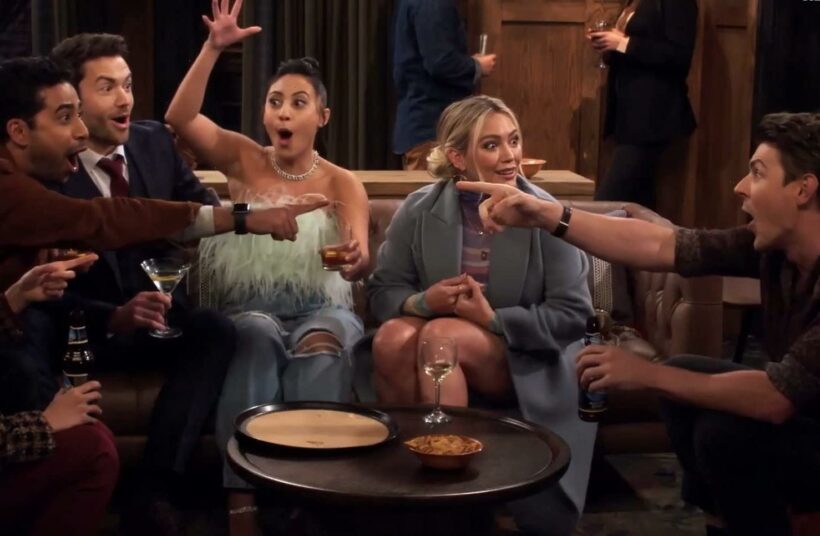 After the rush of holiday specials and prestige movies that define December, January entertainment can often feel like a bit of a letdown. That it’s traditionally been a dumping ground for iffy-looking movies and a bit of a dead zone for new TV shows hasn’t helped its reputation.

But release patterns have changed drastically over the past few years (and even more drastically during the pandemic). Even in the worst of years there’s always something worth seeking out, and this doesn’t look like a bad year at all thanks to awards season contenders making their way out in the world after limited runs, some ambitious TV projects, and some fun-looking network comedies, including our first pick for the month.

RS Recommends: From Making Matcha to Tie-Dye, 10 Things We Perfected at Home This Year

'Silence of the Lambs': 'It Broke All the Rules'

One of the defining sitcoms of the 2010s, the Justin Spitzer-created Superstore wound down its run last year. Those missing it, however, should probably check out Spitzer’s latest, which shifts the focus away from the service industry and toward the upper-management of a struggling auto company. As an over-her-head CEO transitioning in from the pharmaceutical industry, Ana Gasteyer leads an ensemble that includes Harriet Dyer, Tye White, and Superstore veteran Jon Barinholtz. Watch for free on Peacock here.

When Modern Family left the air in 2020 it felt like the end of an era, both because the show was such a long-running institution and because it was one of the last shows standing from the mockumentary comedy boom of the ’00s. What We Do in the Shadows has helped keep that tradition alive with a vampiric twist and now this promising new comedy set in a struggling Philadelphia elementary school is trying to put a fresh spin on the formula. Olivia Brunson (A Black Lady Sketch Show) does double duty as both the series’ creator and its star. Watch with a free trial to Vidgo here.

A group of L.A. friends who frequent a wine bar (that title’s a play on words) provide the focal point for this new comedy featuring, among others Echo Kellum (Arrow) and Nicole Byer (Nailed It!). Does a comedy really need more than a group of friends hanging out and trading quips to work? Not really. But this one has one additional element: narration from SNL great Garrett Morris. Watch for free on Peacock here.

Women of the Movement (ABC, January 6)

The murder of 14-year-old Emmett Till in 1955 became one of the galvanizing events of the civil rights movement, but that might not have happened were it not for the tireless search for justice undertaken by the victim’s mother, Mamie Till-Mobley. Written by Marissa Jo Cerar and starring Broadway star Adrienne Warren, this six-part series chronicles the story of Till-Mobley’s quest and the ripples it created. Gina Prince-Bythewood directs the first episode. Watch with a free trial to Vidgo here.

Previously set to his theaters last January but delayed by Covid, this Simon Kinberg-directed spy thriller finds CIA agent “Mace” Brown (Jessica Chastain) teaming up with a supergroup of female spies from around the globe played by Lupita Nyong’o, Diane Kruger, Penélope Cruz, and Fan Bingbing. Will they kick ass and save the world? (Spoiler: probably.)

Asghar Farhadi’s latest returns the director to Iran for an acclaimed drama about a deep-in-debt man (Amir Jadidi) who faces an ethical dilemma when the opportunity to escape his troubles presents itself. There are few directors as sure-handed dealing with murky moral questions than Farhadi, and this should be no exception. Watch with a free trial to Amazon Prime here.

Based on journalist and novelist J. R. Moehringer’s 2005 memoir of the same name, this George Clooney-directed film recounts Moehringer’s coming-of-age as a kid pining for an absent father who finds a different sort of father figure hanging around in the Long Island bar of his Uncle Charlie (Ben Affleck). Tye Sheridan (who plays Moehringer for the bulk of the film), Lily Rabe, and Christopher Lloyd co-star. Watch with a free trial to Amazon Prime here.

Created by writers Brian Michael Bendis and David F. Walker and artist Jamal Campbell, Naomi McDuffie breezed into the pages of DC Comics a few years back and has been a highlight ever since. A young Black teenager living in the American heartland who comes to realize she has origins elsewhere (maybe way elsewhere), the character should fit right into the CW’s line-up of DC heroes, where she’ll be played by Kaci Walfall. She’s arriving there in good hands, too: Ava DuVernay developed the show and scripts the pilot.

A spin-off of James Gunn’s appealingly vulgar The Suicide Squad, Peacemaker comes from a cruder corner of the DC Universe. John Cena’s Peacemaker, a hard-fighting tough guy determined to enforce peace (but who doesn’t have much use for a moral compass in accomplishing that goal), was one of the film’s highlights. This new series—written by Gunn, who also directs several episodes—explores Peacemaker’s origins. Expect them to be anything but peaceful. Watch on HBO Max here.

It’s been 25 years since the original Scream revived the slasher movie while taking it apart to see how it works, and since years-later revivals are now also part of the genre a new entry was probably inevitable. This fifth installment looks like an attempt to pass the torch. It features original cast members like Courtney Cox and Neve Campbell and newcomers like In the Heights’ Melissa Barrera. The late Wes Craven will be tough to follow, but the creative team (writers James Vanderbilt and Guy Busick and directors Matt Bettinelli-Olpin and Tyler Gillett) previously collaborated on the delightful thriller Ready or Not, so this should be worth a look.

Horror fans can also forward to some small-screen scares, too, thanks to this new found-footage series. An adaptation of a popular podcast of the same name, this new series has been a bit shrouded in mystery, but that’s kind of appropriate. Mamoudou Athie stars as an archivist charged with restoring some videotapes from the Nineties only to stumble upon a horrifying mystery. (They’re not just old episodes of Friends, in other words.) Watch on Netflix here.

Thanks to films like Plan B and Vacation Friends, Hulu has quietly become a reliable source for solid comedy features of the sort that used to play theaters. This teen comedy looks to continue that trend via the story of a high school overachiever (Mika Abdalla) trying to prepare to lose her virginity with the same studiousness she brings to school. Watch with a free trial to Hulu here.

A beloved fixture of New York’s comedy and cabaret worlds, Bridget Everett may have finally found her breakout role with this series inspired by Everett’s own life. Everett plays Sam, a returning Kansan who reconnects with old acquaintances and rediscovers her love of singing while mourning the loss of her sister. Watch on HBO Max here.

How I Met Your Father (Hulu, January 18)

This sequel to the long-running sitcom How I Met Your Mother stars Hillary Duff as a single New Yorker navigating adulthood with a close-knit group of friends while her future self (Kim Cattrall) recounts the misadventures of her youth to her children. If that sounds a lot like How I Met Your Mother with a sexes-reversed twist, well, that’s probably no accident. But it worked before so why not try it again? Watch with a free trial to Hulu here.

Friday Night Lights and Parenthood established Jason Katims as a master of stirring emotions without pandering or being manipulative. He does heartfelt drama right, which should make him a good fit for this show, adapted the Israeli series On the Spectrum, about a trio of roommates on the autism spectrum who support each other as they try to make their way in the world. Watch with a free trial to Amazon Prime here.

Based on Robert Harris’s 2018 novel, Munich, this new thriller is set largely against the backdrop of the signing of the Munich Conference, the fateful gathering during which British PM Neville Chamberlain signed a deal with Hitler that had horrible repercussions. Jannis Niewöhner stars as a Germain aide determined to get news of Hitler’s real plans to a British friend (George MacKay) he met at Oxford before it’s too late. Jeremy Irons co-stars as Chamberlain, and the film is said to be kinder to him than most history books. Watch on Netflix here.

As the writer of Gosford Park and creator of Downton Abbey, Julian Fellowes is pretty much the go-to person for series about intrigue and in-fighting amidst the upper crust of yesteryear. With this new series Fellowes turns his attention to the New World, specifically New York during the bustling 1880s, when the newly wealthy threatened to shake up high society and the old guard tried to keep change at bay. The remarkable cast includes Christine Baranksi, Cynthia Nixon, and Carrie Coon. Watch on HBO Max here.

Finnish director Juho Kuosmanen won applause at last year’s Cannes where his latest shared the Grand Prix with fellow January debut, A Hero. An adaptation of a 2011 novel Rosa Liksom, it depicts the friendship that develops between a Finnish student and a Russian miner over the course of a journey from Moscow.

A sometime enemy/sometime ally to Spider-Man, Morbius, the Living Vampire has been kicking around comics for years. Now he gets the spotlight (though he’d likely prefer the dark) via this big-screen adaptation starring Jared Leto as a scientist whose attempt to cure his own fatal illness leads to bloodsucking consequences.

Tiffany Haddish stars as a detective trying to get to the bottom of a pop star’s murder at a high school-reunion afterparty in this eight-part series directed by Christopher Miller (with Phil Lord, one half of the team behind The Lego Movie and 21 Jump Street). The twist: every suspect has their own perspective on what happened and the stories just don’t line up. Sam Richardson, Ike Barinholtz, Ben Schwartz, and Ilana Glazer play some of those who might have done it. Watch on Apple TV here.

The spookiness continues with this intriguing-looking anthology series depicting three tales of what happens when various parties attempt to move into a house across different time periods. Telling those tales: three expert stop-motion animation teams, each putting their own spin on the series’ creepy world. Watch on Netflix here.

The pandemic has proven challenging for awards shows, which have had to rethink their approaches for an era in which packed crowds don’t really work anymore. It hasn’t always worked, but last year’s Grammys served as a standout exception by putting the emphasis on performances rather than speeches and awards, a formula this year’s ceremony would be smart to emulate. Watch with a free trial to Paramount+ here.