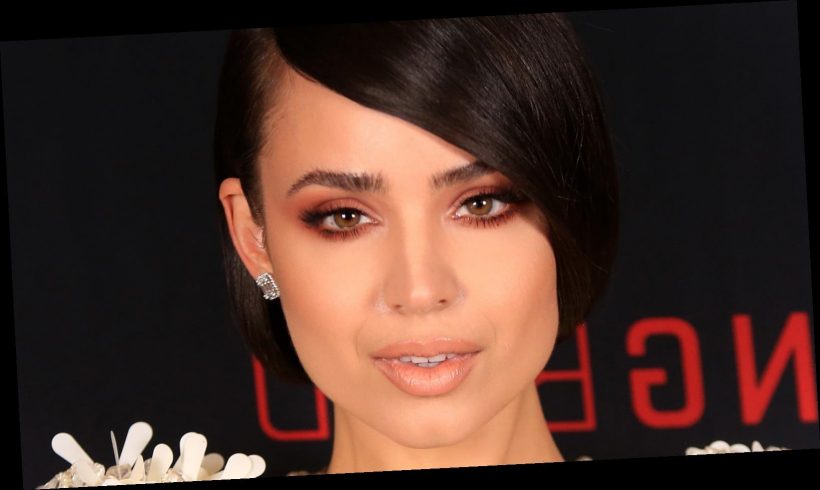 How much do you really know about Descendants and Feel the Beat star Sofia Carson? Well, for starters, that isn’t her given name. Per her IMDb page, Carson was born Sofía Daccarett Char. And she’s come a long way since she hit the Hollywood scene in 2014. From guest-starring in shows like Austin & Ally and Faking It to starring in a Pretty Little Liars spinoff, Carson has become a young star to watch.

And for those who aren’t familiar with Carson yet, they’ll be seeing more of her soon. The actor is hosting the HFPA Presents: Globes Countdown Live on Feb. 28, 2021 on Twitter, with the Golden Globes countdown special starting at 6:30 p.m. ET.

Ahead of the award show, here’s what fans should know about Carson and her body of work so far. Between her family ties and her friendship with her Descendants co-stars, Carson has a lot going on.

Sofia Carson has been dancing since she was 3 years old

In Netflix’s Feel the Beat, Sofia Carson plays April, a professional dancer who goes back to her hometown after failing to make it on Broadway. And while the real-life Carson is far from washed-up, she has one major thing in common with her character: her love for dancing. The Lansing State Journal reported in 2016 that Carson started taking dance lessons when she was just 3 years old. She went on to attend the dance-focused Maria Verdeja School of Arts in Miami, per the Sun-Sentinel.

Still, Carson had a dance double for at least some of the Feel the Beat scenes, per Cinema Blend. Jessy Lipke, the founder of Power Girl Fitness, filled in for Carson in some parts of the Netflix movie. But overall, the movie helped Carson reconnect with her dance roots.

“I fell in love with dance when I was three years old. I remember the moment when I stepped into my first pair of ballet shoes and walked into my first dance class. I remember the moment so vividly when I first walked onto a stage. It felt like home, and I felt free,” Carson told PopSugar in June 2020. “All of those things that April had forgotten because she was so caught up in trying to be better, which is something that I struggle with, I have felt those things so vividly. Something about her story just felt so real for me.”

Sofia Carson’s given last name, Char, sheds some light on the actor’s famous relatives. Carson’s IMDb bio states that “through her mother, Sofia is related to the Char family of Colombian politicians,” a fact Carson confirmed in an interview with the Lansing State Journal in 2016. The paper explained that Carson’s parents were both born in Colombia, and her mom is related to “the Char family that is prominent in Colombian business and politics.”

And while Carson was born and raised in Florida, her Colombian heritage has always been a big part of her life. She told the paper that her family spent Christmas in Colombia and that she spoke both English and Spanish growing up.

As for the actor’s name change, she still has a tie to her family. “Carson” is her mom’s maiden name, the Journal explained. So even though the actor changed her name, she’s still carrying her family with her.

After starring in three Descendants movies together, Sofia Carson and Dove Cameron are as thick as thieves. The two stars have done various interviews together over the years, and they only have positive things to say about each other.

And when the Descendants movies wrapped, Carson and Cameron shared an emotional moment together on set after filming the final scene. “Sofia and I, we laid down on our big musical set, on the bridge,” Cameron said to Access Online in 2019. “And we held hands, and we were like, ‘Let’s just stay here until the crew kicks us out.’ And we did.” The actor shared a similar story with Yahoo about lying down on the set for “hours” after the third movie’s filming ended.

Carson also shared some sweet words of support when Cameron started dating their Descendants co-star Thomas Doherty. “As long as she’s happy, I’m happy is what I always say,” Carson said to People in 2017. Cameron and Doherty broke up in December 2020, but it’s nice to know that Carson always had her back.

As for Carson’s own love life, though, the star is a bit more mum. “I go out on dates, and I date. I think the key is, for me, [to] keep privacy. I think it’s easier than you would think to keep things private,” Carson told People. “The second you post a photo, then you’re obviously announcing to the world.”

Another thing that drew Dove Cameron and Sofia Carson together was the loss of their friend Cameron Boyce, who starred alongside them in the Descendants films. Boyce died in his sleep in July 2019 after suffering a seizure, per CNN. He was 20 years old.

“To our angel, There are not enough words. There will never be enough words. I couldn’t bring myself to do this because doing this makes it real. Letting you go is not something I know how to do. And I just can’t fathom living in a world without you. I love you, Cam. And I will love you. Forever,” Carson captioned an Instagram photo of Boyce that she posted the week after his death.

The actor shared the same photo on the one-year anniversary of his death, as well as a video of Boyce singing. “To our angel, It’s been 365 days of missing you. And every day, we miss you a little more. Not having you, hurts too much. But somehow, you still manage to light up our whole entire world,” Carson wrote in her Instagram caption. “Our Cam. Our forever boy. Our sunshine wearing shoes. I miss you. So much. I love you. And I will love you. Forever.”

Sofia Carson is a UNICEF ambassador

Helping those in need is vital to Sofia Carson, and the actor was named a UNICEF ambassador in October 2020. Before that, Carson had been working with the charity since 2017.

“I’ve said it before, and I’ll say it again, there is no stronger force in this world than an empowered and educated woman,” Carson wrote in a 2019 Teen Vogue op-ed about her work with UNICEF. The actor went on to explain that millions of girls worldwide are missing out on their educations due to factors like poverty and child marriage.

“My role as a UNICEF Ambassador is more important than any movie I could ever film or any song I could ever write,” Carson wrote in a People op-ed in October 2020. It’s clear that the actor recognizes her immense platform and that she’s intent on using her star power for good.