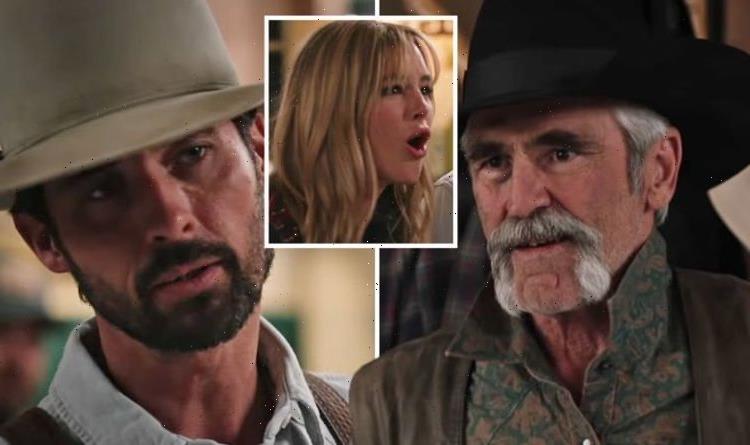 Lloyd (played by Forrie J Smith) has had a disdain for rancher Walker (Ryan Bingham) ever since he set foot on the Yellowstone Ranch. However, after season three newcomer Laramie (Hassie Harrison) decided to strike up a romance with Walker despite first sleeping with Lloyd, the pair’s rivalry has continued to escalate. So much so that in episode six of season four of the Paramount drama, Lloyd stabbed his bunkhouse rival – but could it all be down to Rip (Cole Hauser) instead?

Tensions between Lloyd and Walker have hit fever pitch in season four as Walker continues to flaunt his newfound romance with Laramie right in the face of Lloyd.

Early on in the fourth run, Lloyd couldn’t stop himself from brawling with Walker on John Dutton’s (Kevin Costner) ranch – resulting in Rip beating up his close pal for instigating violence on the ranch.

Rip’s no fan of Walker either, but the golden rule on the ranch is no fighting and if anyone wants to pick a fight, they have to take on the powerhouse that is Rip.

This appeared to escape Lloyd’s mind once again in episode six, however, as Lloyd not only attacked Walker but ended up smashing his prized guitar before lodging a knife into his chest.

The likes of Mia (Eden Brolin), Ryan (Ian Bohen) and Colby (Denim Richards) could only watch on before they rushed into action to try and save Walker from his stab wound.

In true Yellowstone fashion, once Walker had recovered, Rip had the pair face off once and for all to get their angst out of their system.

After a bone-crushing brawl, Rip did his best to get the message across to Lloyd once more by callously breaking his hand.

Heading towards the season four finale, the pair’s rivalry may appear to be settled in the ring – but nothing is for certain on Yellowstone.

However, while the dominant theory behind their feud stems from Laramie and jealousy, some of the show’s stars have offered up another reason – and it’s very convincing.

Speaking on Paramount’s Stories from the Bunkhouse, Yellowstone actors Denim Richards, Ian Bohen and Jefferson White broke down and analysed the feud.

Richards weighed in: “In the bunkhouse, it is so confined. Every time something happens, the stakes are super high, you know.

Richards then delved further: “Yeah! It was interesting for Lloyd when Rip came in and then hit him and threw him over a table – that didn’t resonate with him.”

White offered his thoughts as he said: “It’s these series of escalations. Breaking that guitar, that guitar is like such a part of Walker’s identity.”

But explaining the possible reasoning for Lloyd’s hatred and out-of-character violence towards Walker, the stars suggested it stems from Rip.

Richards pointed out: “Maybe Lloyd feels like in his own weird way like, ‘I’m doing a favour to Rip’.”

White agreed: “Exactly, because they both, Rip and Lloyd, hated Walker – and Lloyd is also living with him still.”

Bohen backed the theory as he referred to Walker’s less than welcome introduction to the ranch back in season one: “And don’t forget Rip was fully ready to kill Walker in the forest – that guy’s ran out of nine lives as far as I’m concerned.”

And there are plenty of clues on-screen to support the theory, as well as Rip earlier wanting to take Walker to the “train station”.

Rip told Lloyd in season four: “Ain’t nobody wants that son of a b***h dead more than me.”

So with Lloyd well aware of Rip’s hatred towards Walker and the cowboy’s fierce loyalty to the ranch’s enforcer, could he be behind the attacks rather than Laramie?

Yellowstone season 4 airs Sundays on the Paramount Network in the USA. A UK release date is yet to be announced.