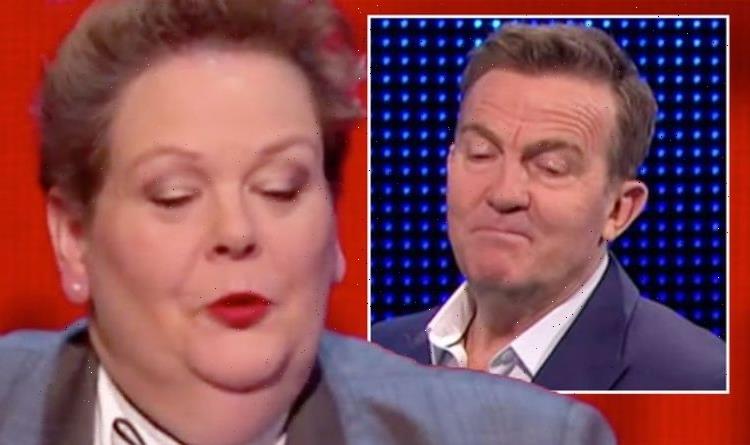 Dave, Alex, Lisa and Jack were the four The Chase contestants taking on Anne ‘The Governess’ Hegerty in Tuesday’s rerun of the ITV quiz show. And the team proved formidable opposition to the quizzing guru, with each player impressing both in their cash-builders and head-to-heads. However, when final player Jack, a boxing MC, took to the table, Bradley Walsh drew attention away from the quizzing as he couldn’t resist a jibe at Anne’s expense.

After Dave, Alex and Lisa had made it back to the Final Chase with £19,000 in the prize fund, it was only Jack left to make it a full house.

And as he stepped up to the table, Bradley was instantly interested in his unique job as a boxing MC.

So much so, Bradley even got Jack to do a show first and introduce Anne rather than The Chase host doing so.

Anne soon walked out but instead of commenting on Jack’s skills, she instantly took aim at Bradley.

“Did I see you mouth super heavyweight?” Anne grilled Bradley who feigned ignorance as he replied: “No!”

“I said I’m having soup tonight and I can’t wait,” The Chase presenter quipped.

The pair moved on with the head-to-head against Jack and the boxing MC impressed, taking £6,000 back to add to the team’s fund for the Final Chase.

With a four-step head start and £25,000 to play for, the odds were well and truly in the team’s favour.

And they put up a respectable score for Anne to try and hit, racking up 20 steps against the quizmaster.

But Bradley rued the team’s chances as he pointed out they should’ve scored more if it weren’t for delays in their guessing.

“I could’ve driven a bus through them pauses,” he barked at the team.

“(I was) waiting for a buzzer,” he added before Anne took to her seat to see if she could best the team.

And despite some pushbacks, Anne just about secured victory in a nail-biting Final Chase.

In fact, it was such a close call that the Governess couldn’t even believe she’d done it.

With one second left on the clock, Anne hit the 20 question mark.

“Did I do it?” Anne asked as the timer ran out, admitting she was in disbelief she’d pulled off the feat.

As a result, all four contestants went home empty-handed.

The Chase continues weekdays at 5pm on ITV.