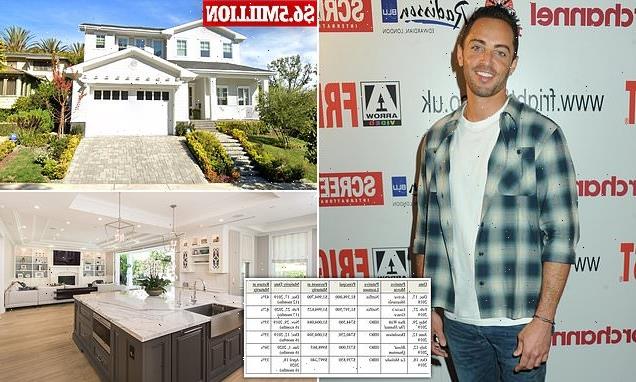 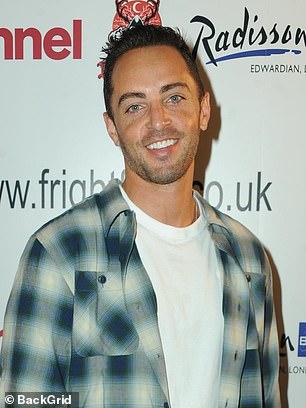 Zachary Joseph Horwitz, 34, a resident in the Beverlywood of Los Angeles, entered a plea to a federal charge of securities fraud and could face up to 20 years in prison when he’s sentenced January 3rd of next year, according to a statement from the U.S. attorney’s office.

Prosecutors alleged that from 2014 to 2019, Horwitz secured hundreds of millions of dollars in loans by using his film company, 1inMM Capital LLC, to solicit investors with bogus claims their money would be used to buy regional distribution rights to movies and then would generate profits by licensing the rights to online streaming platforms, including Netflix and HBO.

Instead of using the funds to acquire films and arrange distribution deals, Horwitz used the money of the victims to repay earlier investors and to support a lifestyle that included buying a Beverlywood residence for$5.7million in 2018, prosecutors said.

The home, which features a pool, gym and wine cellar, is now listed for $6.5million.

The SEC also said Horwitz used the investments to also fund his own lavish lifestyle, including $100,000 spent on trips to Las Vegas and the payment of a $1.8 million American Express bill. 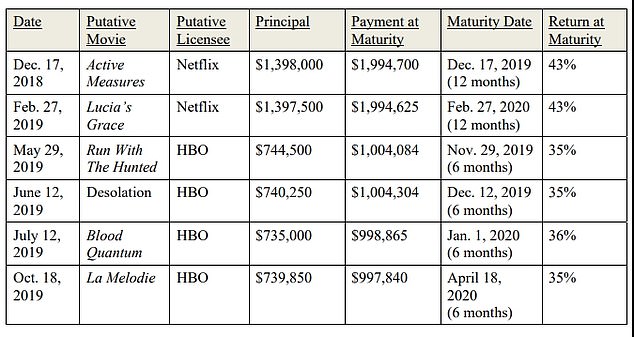 He had allegedly falsely told the investors that he had successful track record of selling film rights and that they were supplying funds to acquire the rights to specific films. Pictured above is an example of the promissory note Horwitz allegedly gave to investors 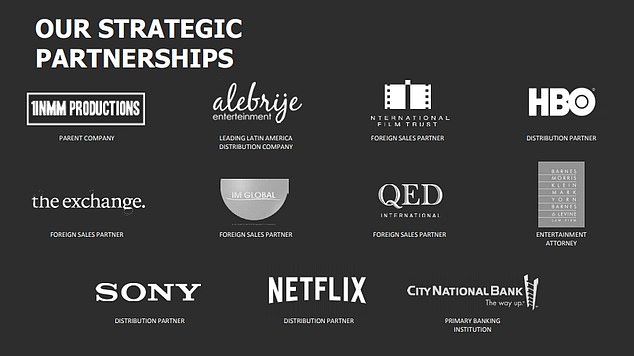 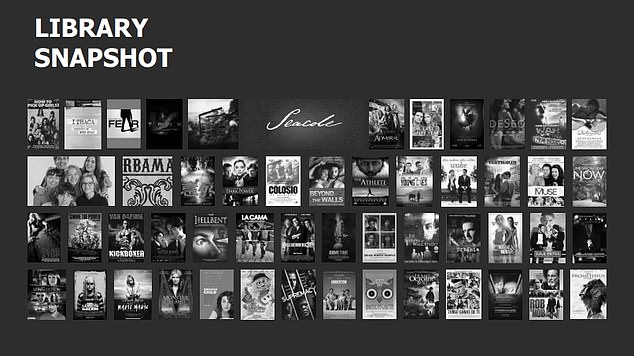 That annual report also included a ‘library snapshot’ of films his company had also distributed via licensing. Among the films that Horwitz lied about owning the rights to include the 1989 Jean-Claude Van Damme action film Kickboxer

Horwitz, who has starred in The Devil Below, You’re Not Alone and Last Moment of Clarity, founded 1inMM Capital LLC in 2013, and promoted it as a Los Angeles-based film distribution company that would acquire and distribute English language feature films to the Latin American market.

His scheme began in 2014, when groups of private investors began engaged in hundreds of promissory notes for a period of six or 12 months with 1inMM Capital based on Horwitz’s statements.

The funds supplied under each note were supposed to provide money for 1inMM Capital to acquire the rights to a specific film.

The promissory notes guaranteed a specified payment on a specified maturity date, as well as the specified amount to be paid at maturity, which included investment returns ranging from 25 percent to 45 percent, according to court documents sent to Dailymail.com. 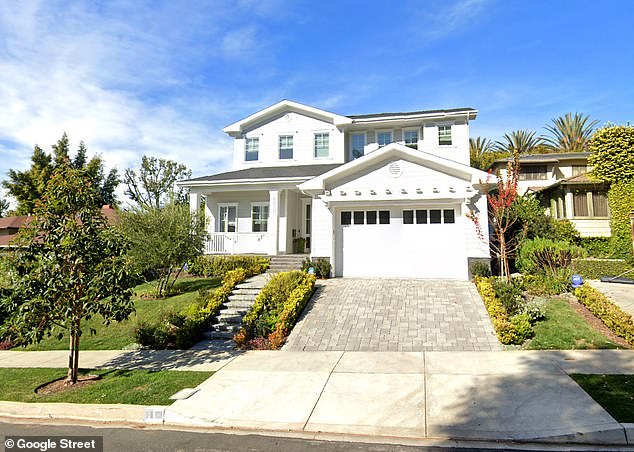 The SEC says Avery used the investments to fund his own lavish lifestyle, including the purchase of his multi-million dollar Los Angeles home (above), $100,000 on trips to Las Vegas and a $1.8million American Express bill 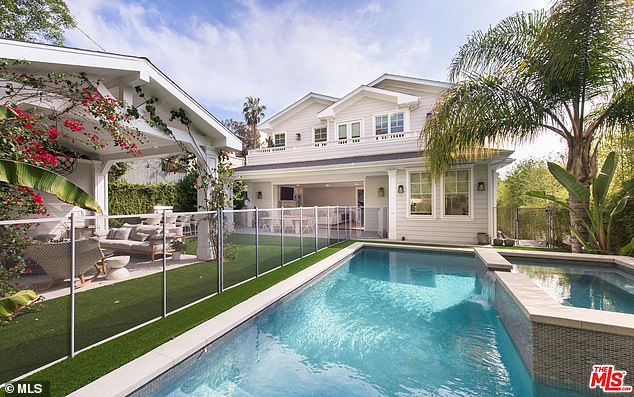 Horwitz purchased his six-bedroom Beverlywood home in 2018. The home, which was built in 2017, features a pool 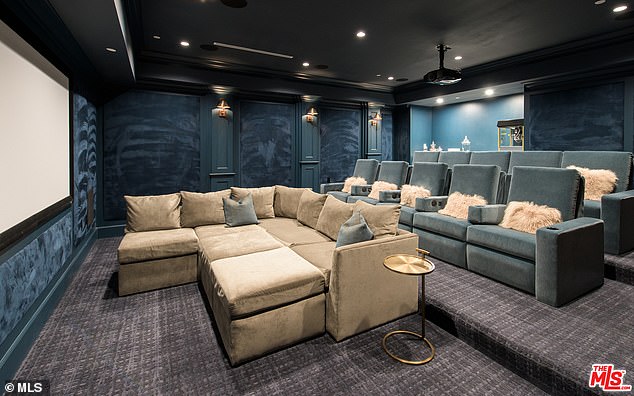 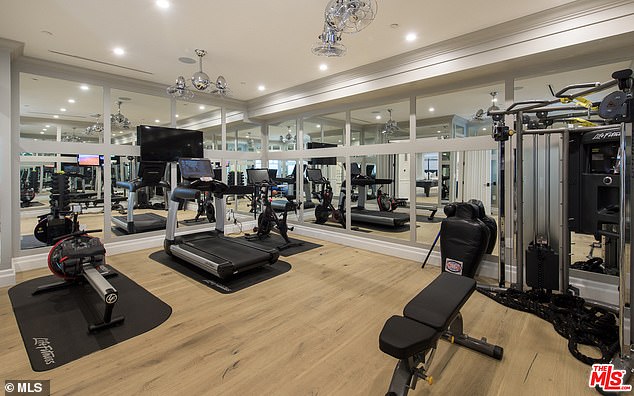 The residence, which features a gym and wine cellar, is now listed for $6.5million 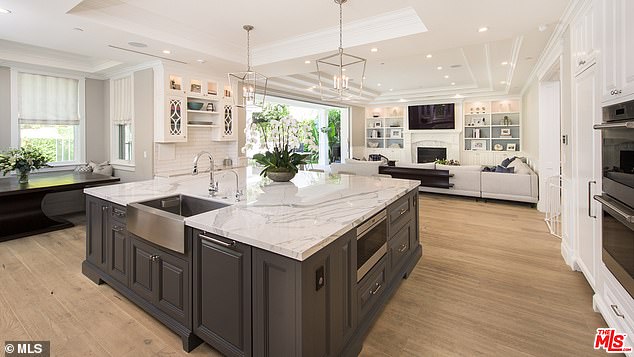 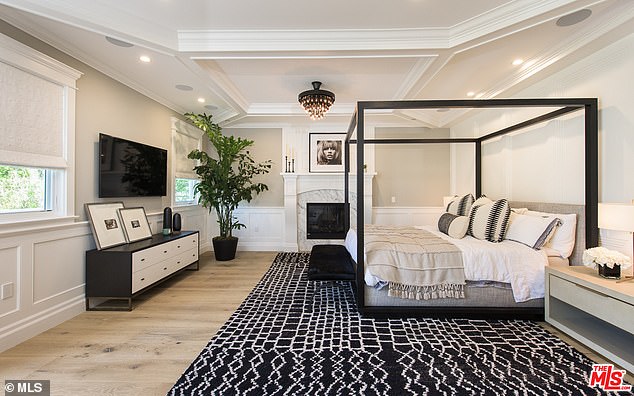 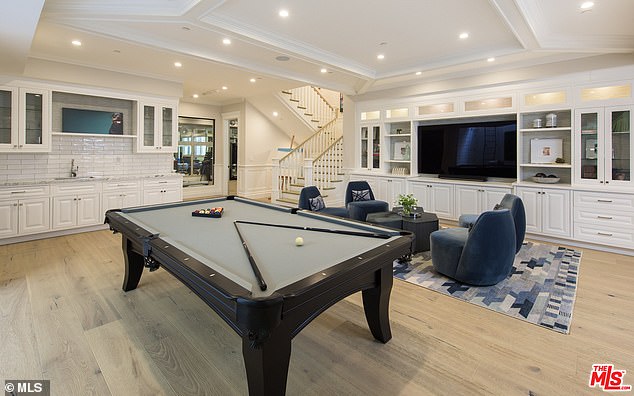 The aspiring actor – whose stage name is Zach Avery – finally admitted to the scheme in a September 1 plea agreement.

‘However, as defendant then knew, his representations concerning 1inMM Capital’s business activities and the promissory notes themselves were false and deceptive because 1inMM Capital generally did not and would not acquire or possess the film distribution rights for the films specified as collateral in the promissory notes,’ the plea agreement aid.

Prosecutors added that in 2019, some investors started to complain after 1inMM Capital began defaulting on each of its outstanding promissory notes, the court documents stated.

In response, Horwitz lulled ‘investors into believing their funds were safely invested’ by blaming the delay on the streaming platforms.

To support these false claims, Horwitz sent the investors emails and text messages he falsely claimed had been sent to him by representatives of the online streaming platforms. 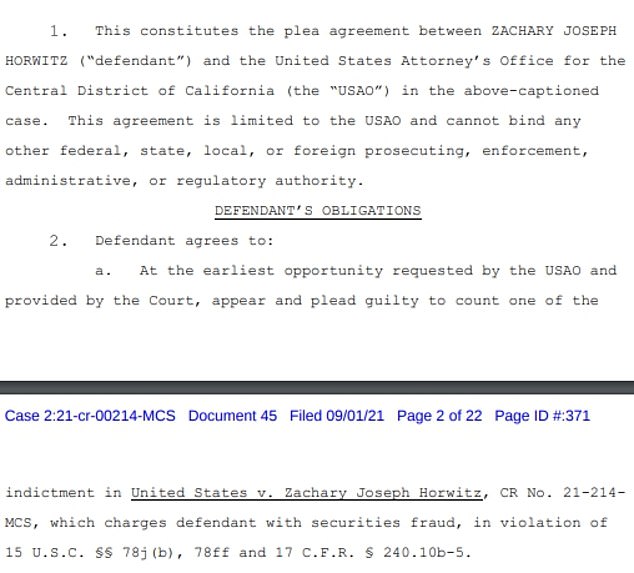 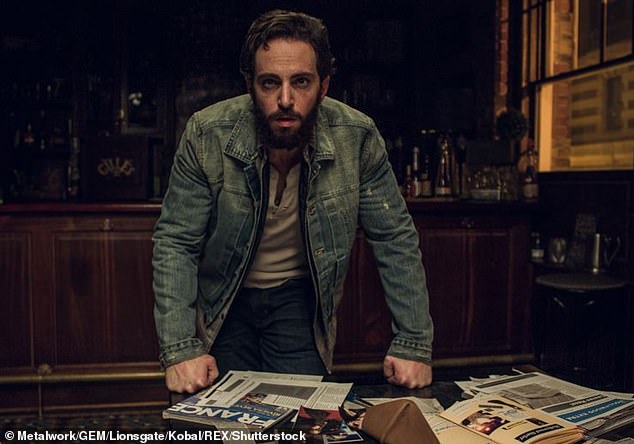 As far as his acting career goes, Horwitz has struggled to find success. In 2018, he appeared in the sci-fi thriller Curvature. He also appeared in the 2020 movie Last Moment of Clarity

He also admitted to obtaining at least $650million from at least five major groups of private investors through the scheme.

More than 200 investors, including three of Horwitz´s closest college friends and their family members, lost about $230 million, authorities said.

Representatives for Netflix and HBO have also denied that their companies engaged in any business with Horwitz, according to a complaint filed to the SEC.

Other than potentially racking up to 20 years in jail, Horowitz might also face a fine of $5 million or twice the gross gain or gross loss resulting from the crimes.

In exchange for the plea agreement, prosecutors will move to dismiss the remaining counts of indictment against Horwitz.

As far as his acting career goes, Horwitz has struggled to find success. In 2018, he appeared in the sci-fi thriller Curvature.

At the time, a critic from Variety said the film ‘wants to get the heart racing and the mind bending simultaneously, but flatlines in both departments’.

His company would then license to online platforms such as HBO and Netflix for distribution in particular regions outside the US, including Latin America.

He promised that 1inMM Capital could provide investors lucrative rates of return on the promissory notes, often in excess of 35 percent.

Horwitz provided promotional material, including annual reports, as well as fabricated agreements and emails regarding the purported deals with HBO and Netflix.

Horwitz managed to secure a series of 6 month or 12 month promissory notes from investment firms on the basis on distributing the films.

According to authorities, Horwitz generally paid out the returns until late 2019. He allegedly did this on early investments by using funds from newer investments.

Investors complained after 1inMM start defaulting on returns in late 2019.

In five years, he managed to raise $690 million from investors that authorities say he mostly used to find his lavish lifestyle.