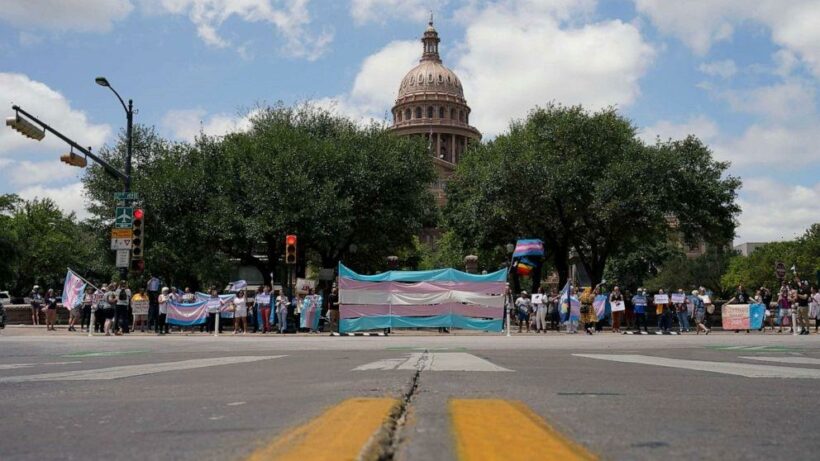 Esmée Silverman, an openly transgender senior in Massachusetts, says her high school experience “had a lot of its ups and downs … mostly downs.”

Silverman, 19, came out to her close friends and family in her freshman year amid the Trump administration’s rollback of protections for the transgender community. Then-President Donald Trump rescinded protections that allowed transgender students to use restrooms that matched their gender identity and placed a ban on transgender troops in the military. She said these laws furthered anti-trans sentiment among her peers, and the pressures from the national political climate have made life as a young transgender teen harder.

The recent wave of anti-transgender legislation has reignited that pain and fear, she said.

Even in the progressive state of Massachusetts, which has laws in place to protect transgender students, Silverman said she feels the burden of the legislation that has been popping up in states throughout the nation and fears for her friends who are in states with anti-trans policies.

More than 100 bills designed to restrict the rights of transgender people have been introduced in at least 33 states, according to the Human Rights Campaign, an LGBTQ advocacy group that has called 2021 a record-breaking year for anti-trans legislation.

The effects of anti-trans legislation — and the rhetoric that accompanies it — is often seen in classrooms and schools across the country, where students such as Silverman combat discrimination, fear and harassment.

Transgender youth are three times more likely to attempt suicide than their cisgender peers, according to the Centers for Disease Control and Prevention.

“My overall experience dealing with these bills has been the horrible thought that I’m going to have to see another one of my friends get buried in the ground,” Silverman said. “The thought of seeing another one because of these harmful, harmful bills … it’s just a fight I can’t bear.”

Andy Marra, the executive director of the Transgender Legal Defense & Education Fund, told ABC News that this legislation is worsening the already-tense school environment and making it hard for students to focus on their education.

“It is hard enough being a student in the time of COVID, when it is difficult for any of us to feel safe, healthy and included,” Marra said, “but for transgender students living in states where their very lives are under attack, it can be near impossible to focus on much else but surviving.”

Shortly after the Arkansas bill prohibiting gender-affirming medical practices was signed into law on April 6, reports of suicide attempts among trans youth in the state brought the emotional and mental toll of these laws to the forefront. Dr. Michele Hutchison, who runs the largest provider of hormone therapy in the state, told the Associated Press that she’s seen an uptick in suicide attempts in her office since the passing of the bill in April. The Arkansas bill was the first bill of its kind signed into law in the U.S.

Arkansas Gov. Asa Hutchinson, a Republican, vetoed the bill, citing the potentially dangerous consequences for trans youth in the state and telling reporters that the bill was “a vast government overreach” and “a product of the cultural war in America.” His veto was overturned by the state legislature.

Republicans who back the bill say they want to protect children. The bill claimed that “the majority [of trans youth] come to identify with their biological sex in adolescence or adulthood,” but there is no evidence in the bill to support that theory.

The sponsor of the bill, state Rep. Robin Lundstrum, did not respond to ABC News’ requests for comment, but on the state House floor, she argued, “Some of them may choose to be transgender when they’re older. That’s OK. That’s their choice. But when they’re under 18, they need to grow up first.”

Texas State Rep. Matt Krause, who also proposed a bill against gender-affirming treatment, told the state’s public health committee in a public hearing that the bill attempts to stop life-changing decisions that teens may regret when they are older.

“We just feel like it’s good public policy that kids shouldn’t even have the option to do that before they become an adult,” Krause said, according to Spectrum News Austin. “It’s not about trusting the parents one way or the other. It’s about good public policy for Texas.”

Meanwhile, at least 31 states have introduced bills that would ban trans athletes from competing in sports that correspond with their gender identities. Arkansas, Mississippi and Tennessee have already signed them into law.

There is no evidence that trans athletes are disproportionately dominating sports that correlate with their gender identity or that they have an advantage in their sport. The National Collegiate Athletic Association (NCAA), the Olympics and the governing bodies for U.S. national gymnastics, soccer and hockey leagues all allow transgender athletes to compete.

Legislation preventing transgender athletes from playing in school sports has been supported by groups such as the Concerned Women of America (CWA), who say male athletes could claim to be women to gain advantages in sporting competitions.

“Title IX’s purpose and benefit are negated for women whenever the playing field is accessible to male athletes claiming status as women,” a statement from the CWA reads. “Title IX’s prohibition of sex discrimination is based on sex — male and female. It does not define sex based on ‘gender identity.’ It does not sanction males, with distinct physiological advantages regardless of treatment, to compete in female sports.”

Silverman said she’s already felt and seen the pain the bills are causing.

“I’ve seen so many LGBT kids message me saying that they’re scared because they’re going to get their hormones taken away. I’ve seen people messaging me crying because they’re not gonna be able to play on the team that they want to play on,” Silverman said. Her message to legislators is: “Your actions or lack of actions are going to have dire consequences for an entire group of people.”

The toll of discrimination in schools

Schools have become a battleground for the fight for transgender rights. Students face pressure from elected officials, school administrations and peers as they navigate life as openly trans young people.

Marra said that even though students already carried the burden of discrimination before these bills were introduced, this legislation is exacerbating the social and emotional hurdles in the lives of students and student-athletes, who are directly targeted in these bills.

“Like any other student, trans young people just want to stay healthy, go to school and spend time with their friends and loved ones,” Marra said. “However, these bills make that incredibly difficult.”

According to research from the Trevor Project, a nonprofit that provides suicide prevention services to LGBTQ youth, 86% of LGBTQ youth said recent politics have negatively impacted their well-being.

Silverman can attest to the harsh reality of living while trans — “I’ve lost friends. I’ve had family question my decision. I have painful situations where I’ve been discriminated against, and I’ve been profiled,” she said.

“The reality on the ground is that trans students in many walks of life are facing discrimination, bias, violence, from the level of microaggressions to extreme instances of discrimination, regardless of laws that protect us, because, of course, in our society, legal recourse demands a lot of energy and resources,” Anderson said.

“We have heard reports of everything from misgendering and deadnaming, which is a term for when people address a trans person by the name they were assigned but don’t identify with or use,” Anderson. said.

Young trans Americans have long been affected by intolerance and inaccessibility, according to the Trevor Project, which also reported that more than half of transgender or non-binary people surveyed had strongly considered ending their lives.

Research from the Gay, Lesbian & Straight Education Network, an LGBTQ advocacy group, showed that 40% of transgender or non-binary youth reported being threatened or harmed physically due to their gender identity, and over 40% of transgender students said they avoided bathrooms, locker rooms and gym class because they felt unsafe or uncomfortable.

Trans students’ rights in the classroom

For many transgender youth, asking for help and advocating for themselves amid the onslaught of anti-trans legislation can be a challenge.

Transgender rights are protected under Title IX, according to legal experts, which is a federal civil rights law that protects students and athletes against gender-based discrimination. The law states that no one can be subject to discrimination on the basis of sex in federally funded education programs.

If a transgender student is going to file legal action against a school for discrimination, Anderson recommended documenting all forms of discrimination in journal entries, text conversations, letters to the school administration and other ways.

Human Rights Campaign Legal Director Sarah Warbelow noted that one course of action is to file a complaint with the U.S. Department of Education, which now accepts complaints from LGBTQ students. She said schools can be held liable for discrimination against transgender students — whether it comes from school officials or other students.

Warbelow said students should speak to administrators or the school board to notify them of any kind of harassment and put them on notice.

“Providing respect to students is a baseline that all of us can meet,” Warbelow told ABC News. “When they tell you who they are, accept and respect it.”

Warbelow and Anderson both agree that legal recourse isn’t the only path forward. Finding allies in and out of the school environment, such as a teacher or counselor, a student-run organization or a local support group, can help students advocate for themselves and feel supported.

“To all the trans people who may not have the most welcoming environment out there, you always have a family with us,” Silverman said. “We may not be able to see each other, we may not be able to even talk to each other in person. But regardless of that, you are always going to have a community of people who love and value you for every second of the day.”