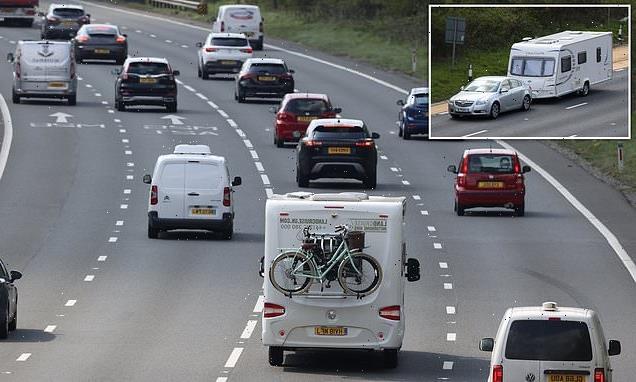 So much for the Bank Holiday! Roads will be jammed as 15m drivers make highest number of getaways for five years, rain and -6C chills are on way and many beer gardens are already fully booked

The bank holiday is expected to be a washout as 15million drivers jam the roads, rain and -6C chills hit and beer gardens are already fully booked.

Motorists are urged to plan ahead for possible delays over the May bank holiday as RAC research suggests nearly 15million separate leisure trips will be made by car between Friday and Monday, the highest number since 2016.

And Britain will be slammed by an 800-mile wide 60mph storm as temperatures hit -6C in the coldest early May long weekend on record.

The country will be colder than Russia amid polar air and scattered snow flurries are forecast in Wales, Scotland, and possibly northern England, with hail in the South.

It comes as those desperate for a catch up in one of the country’s beer gardens could be left sorely disappointed – because they are all booked up.

There will be sunny spells on Saturday and Sunday, but chilly 8-14C highs, 3C below average, will feel like 6-12C in windchill. Not the ideal temperatures for drinks in the local beer garden. 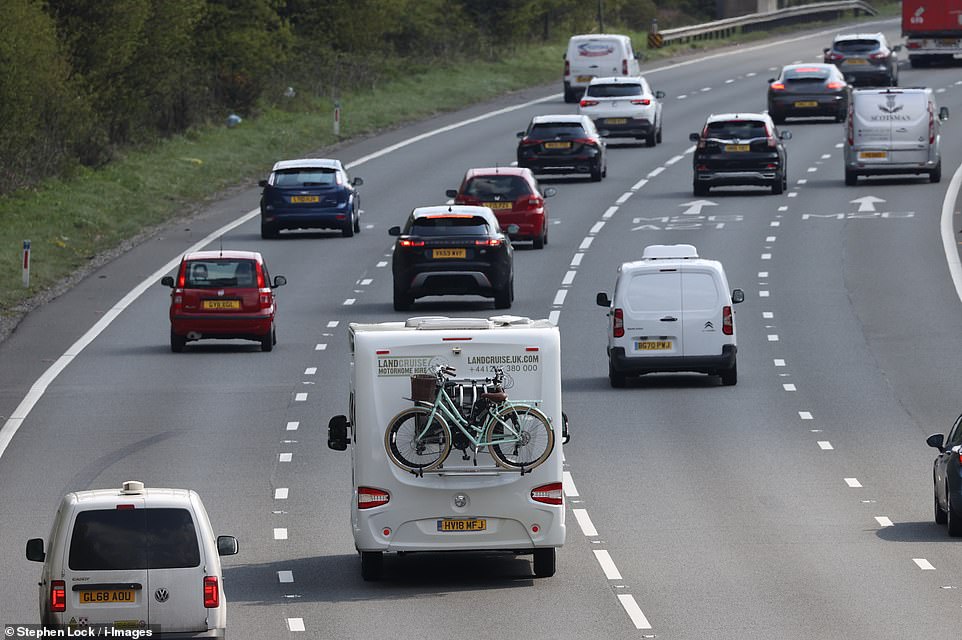 Motorists are being urged to plan ahead for possible delays over the May bank holiday as RAC research suggests nearly 15m separate leisure trips will be made by car between Friday and Monday, the highest number since 2016. Pictured, a motorhome heads along the M25 motorway in Kent. Bikes on the back suggest those inside are heading on a staycation 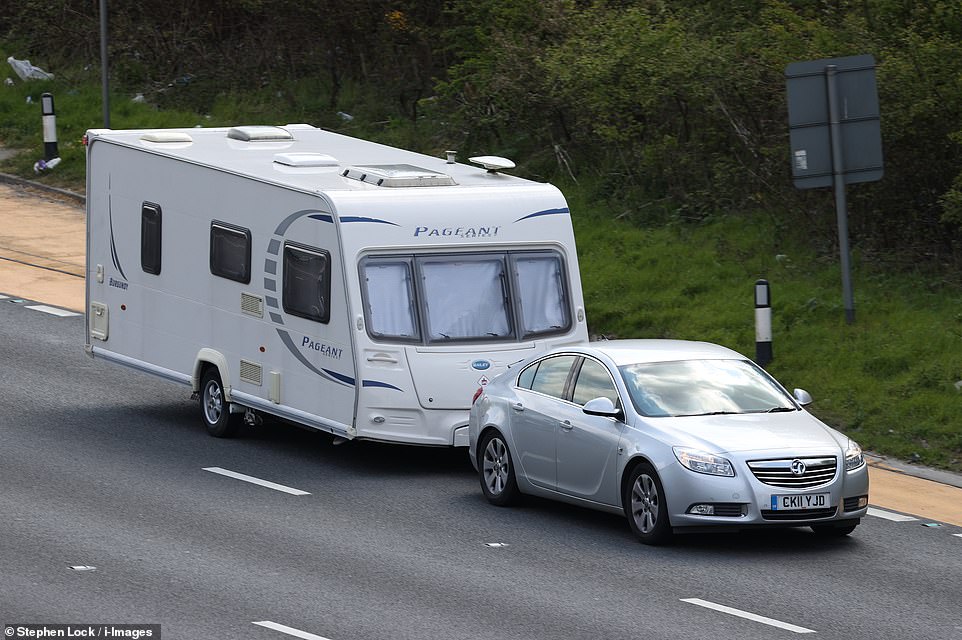 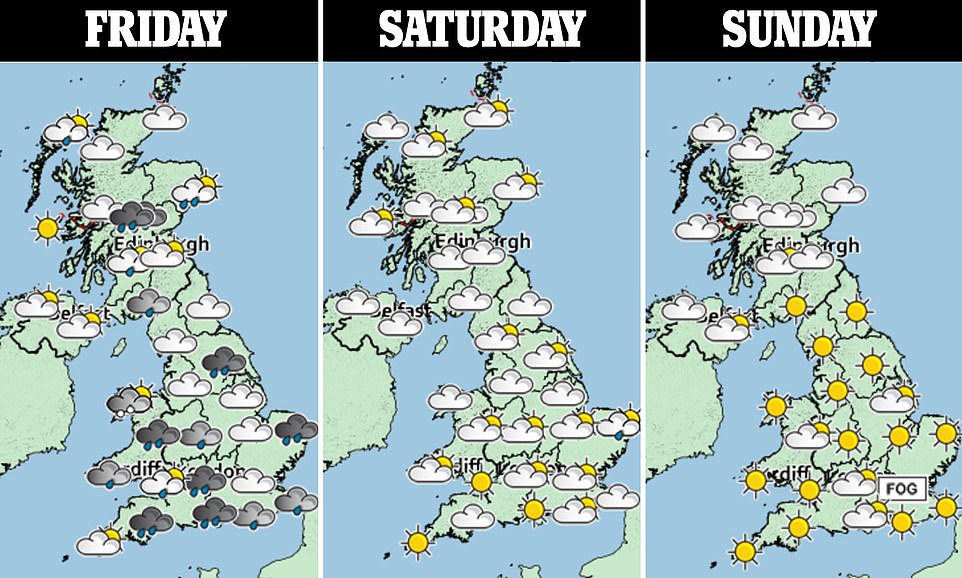 The coldest early May Bank Holiday temperature recorded since the holiday began 43 years ago in 1978 is -5.9C on May 7, 2012, at Kinbrace, Sutherland, Scotland, Met Office records show.

A Monday buffeting follows. with 60mph gusts in the South and pushing 50mph in the North. All parts are due Bank Holiday rain – ironic after a dry April which is also verging on the coldest for 31 years. Warmer spells are then  due again from mid-May.

And MeteoGroup DTN forecaster Eleanor Tracey said: ‘-4C could be seen in England, including the South locally, and Scotland. Snow flurries could fall in Wales, Scotland and possibly on northern England’s Pennines.

Despite the perhaps predictable arrival of what the Met Office expects will be cooler, more changeable weather than of late, drivers are still keen to take advantage of the recent easing of Covid restrictions to see friends and family or take day trips.

The appetite for such trips exceeds Easter, with the RAC survey of 1,000 drivers suggesting an estimated 62 per cent more leisure trips are planned this coming bank holiday weekend than four weeks ago.

The figures indicate Saturday will be the busiest day of the weekend with the equivalent of 2.6million journeys planned, followed by Friday with 2.3million and bank holiday Monday with 2million.

But an additional 6.2million trips are due to be taken at some point over the weekend by drivers who aren’t sure which day they will be on the road – suggesting many might be waiting to find out exactly what the weather has in store.

While Covid continues to impact some drivers’ desire to get out and about, with a fifth (19 per cent) not planning a leisure trip by car at all over the bank holiday, the figure is down from Easter when 25 per cent said they weren’t travelling because of the pandemic. 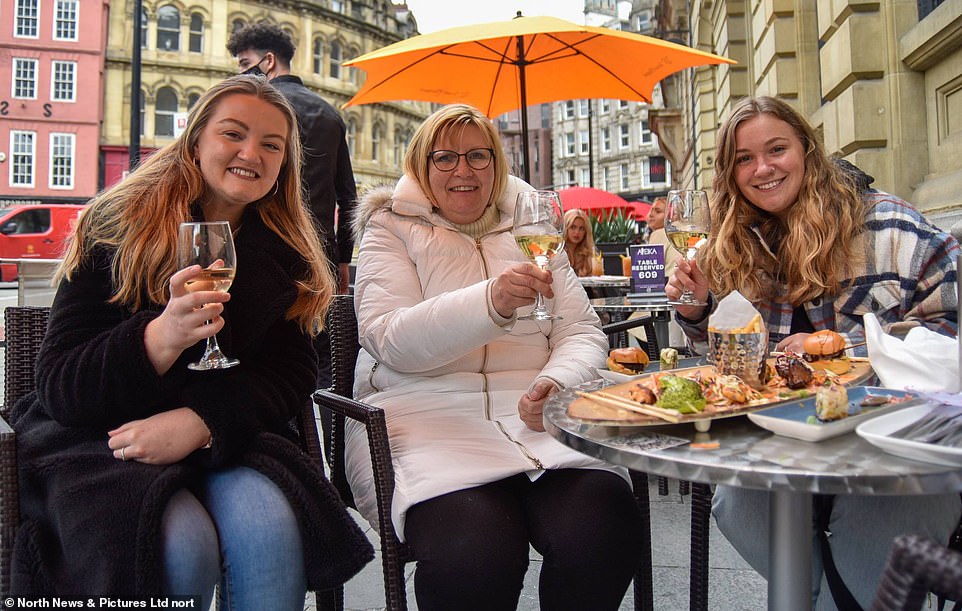 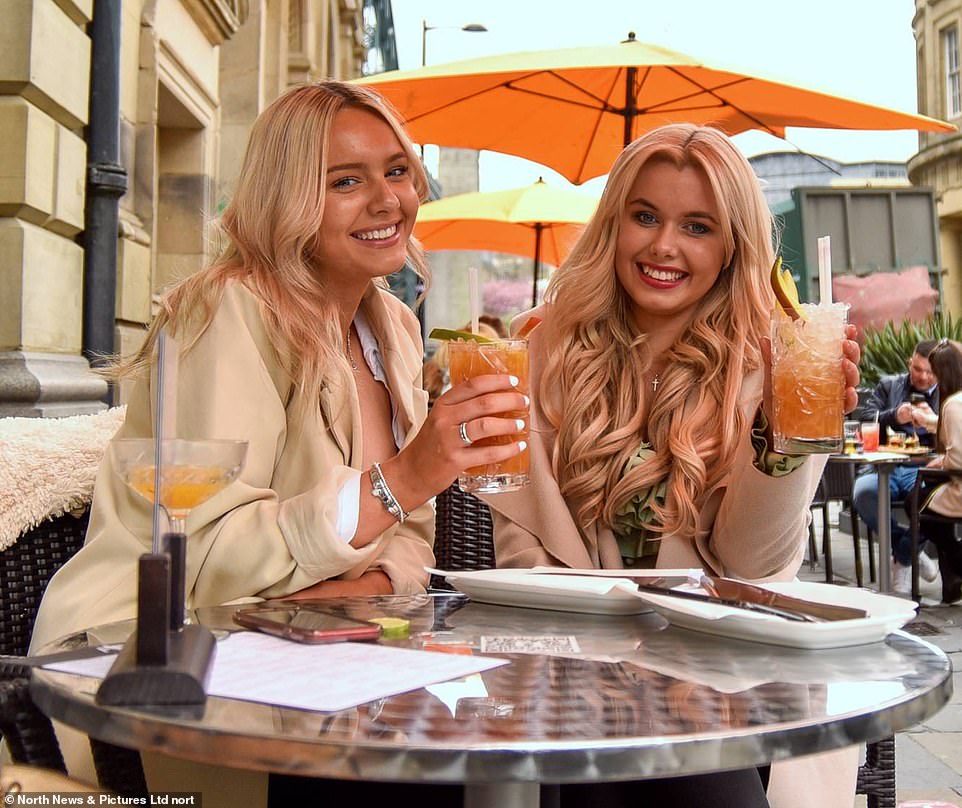 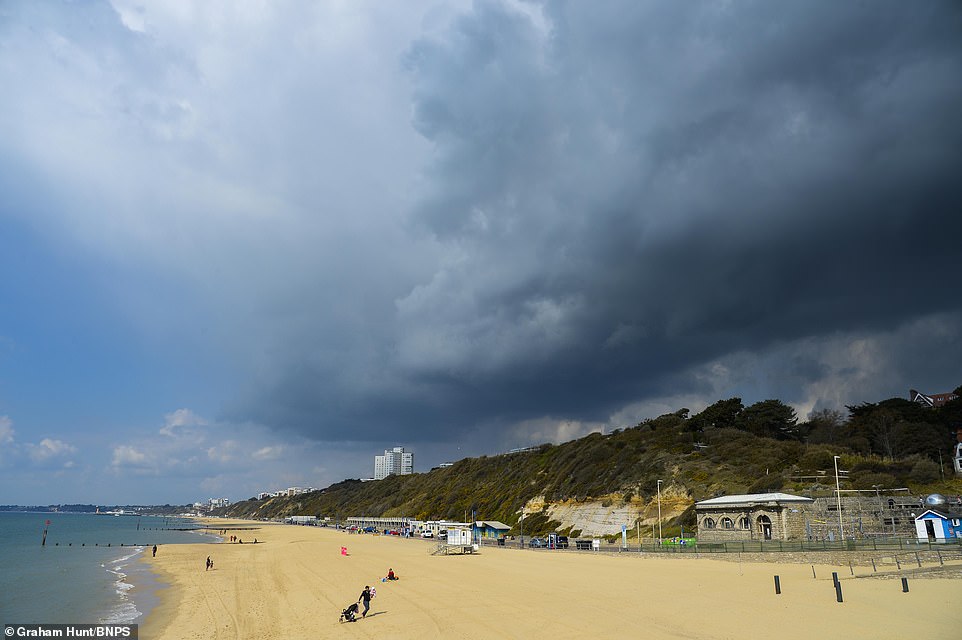 Dark threatening clouds build above the beach at Boscombe in Bournemouth, Dorset after a warm start to the morning 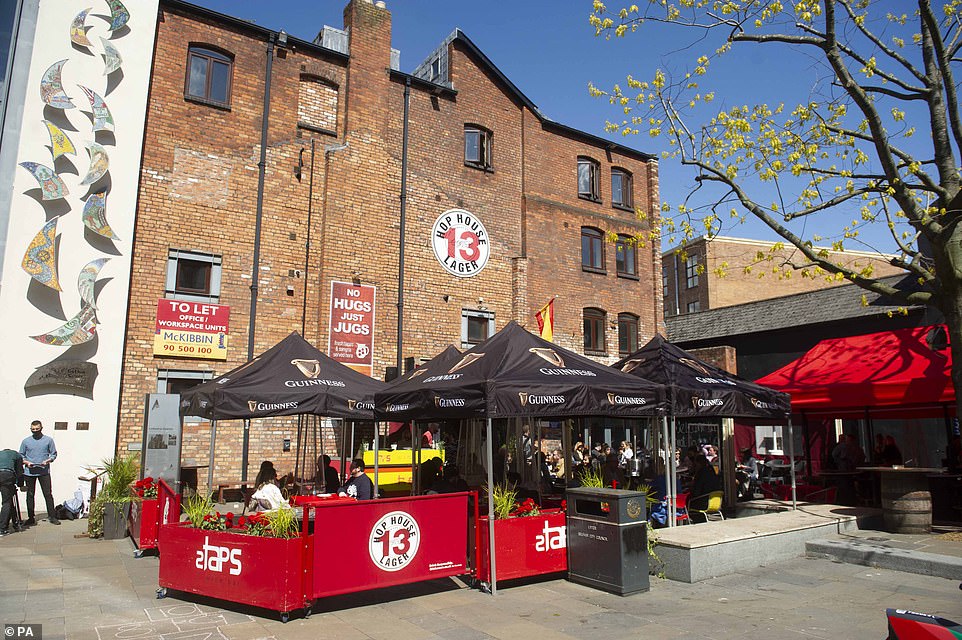 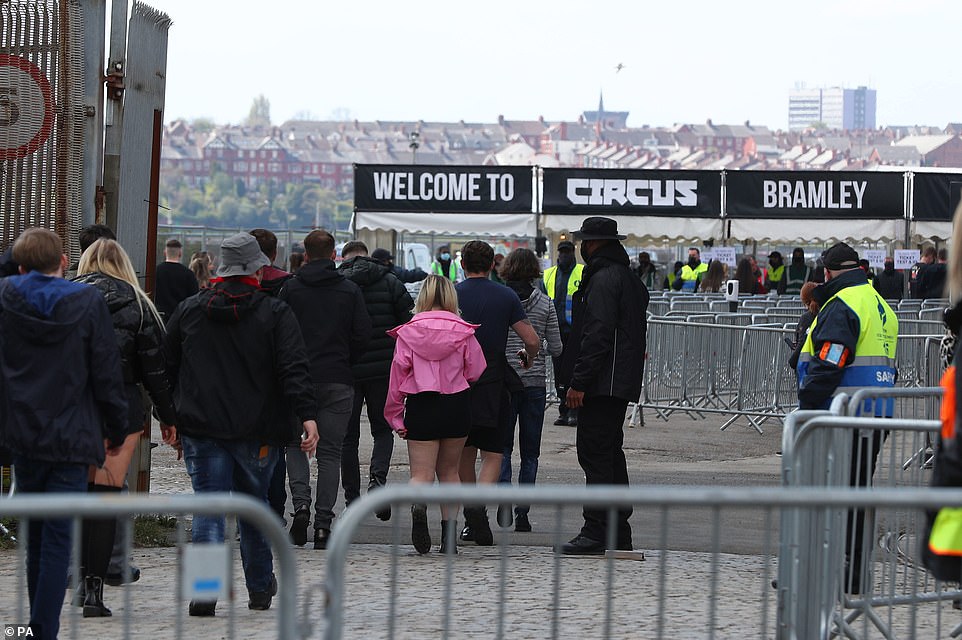 Revellers arrive at Circus nightclub in Bramley-Moore Dock, Liverpool, for a Covid safety pilot event which will be attended by around 3000 people

RAC traffic spokesman Rod Dennis said: ‘After what was one of the quietest Easters on the roads in years our figures suggest the easing of Covid restrictions has made a dramatic difference with millions more drivers planning to hit the roads.

‘It remains to be seen what effect the weather will have as meeting up in soggy parks and gardens may not prove quite so appealing. And if it’s too cold for a trip to the beach, then there could be a big uplift in visits to shops, cafes and restaurants with covered outdoor areas.

‘Nonetheless, the prospect of queues on the roads – particularly leading to major shopping centres – looks far more likely this coming weekend, and we’d advise drivers to plan ahead and keep tuned to local traffic bulletins to find out if there’s any disruption.

‘What’s more, given nearly a fifth of drivers we surveyed said they had yet to decide on which day over the long weekend they will be travelling, it might well be the case that the weather ends up playing a deciding role in which days end up being busiest. Any sunnier, warmer days could trigger many more people to jump into their cars.’

The RAC is recommending all motorists complete the usual ‘pre-drive checks’ before setting out, something that takes just a few minutes but could avoid hours of hassle as a result of a breakdown.

Ensuring all tyres are in good condition and properly inflated – including those on caravans or trailers for those towing – along with checking oil and coolant levels should be top of the list.