London: Boris Johnson has said for the first time that he has six children, joking during an interview with a US broadcaster that he “changes a lot of nappies”.

The British Prime Minister has faced years of speculation about the number of children he has fathered and tends not to discuss the issue when asked. 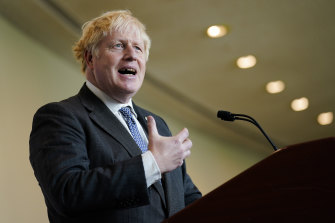 In an interview filmed after his address to the UN, Boris Johnson said “he had changed a lot of nappies.”Credit:AP

But during a lengthy chat with NBC on a skyscraper overlooking New York, Johnson went further than usual.

When the interviewer put to him that he had six children, the Prime Minister replied: “Yes.”

Johnson has a one-year-old son, Wilfred, with his wife Carrie Johnson. All three of them went to the G7 summit in Cornwall in June.

Mr Johnson has four children from his previous marriage to Marina Wheeler, his second wife, Lara Lettice, Milo Arthur, Cassia Peaches, and Theodore Apollo. The pair announced their divorce in 2018 after 25 years of marriage.

The Prime Minister also has a daughter, Stephanie, from his extramarital relationship with the journalist and art critic Helen Macintyre.

Carrie Johnson is also pregnant with the couple’s second child. It will be the Prime Minister’s seventh child. 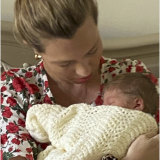 There has been speculation for years about the exact number of children Mr Johnson has fathered.

Legal documents at one point hinted that he could have had a second child with Macintyre, but they were not conclusive.

Carrie is the Prime Minister’s third wife. Mr Johnson did not have any children with his first wife, Allegra Mostyn-Owen.

Carrie, two decades younger than the Prime Minister, was a former political adviser. She worked with numerous Tory cabinet ministers and as the party’s head of communications.

The couple’s second child is due to be born around Christmas. Both children will have been born during Johnson’s time in Downing Street – a rarity in prime ministerial history.

In a post on Instagram announcing the news in July, Mrs Johnson revealed that she had suffered a miscarriage before becoming pregnant a second time. She wrote: “At the beginning of the year, I had a miscarriage which left me heartbroken. I feel incredibly blessed to be pregnant again but I’ve also felt like a bag of nerves.

“I found it a real comfort to hear from people who had also experienced loss, so I hope that in some very small way sharing this might help others too.”