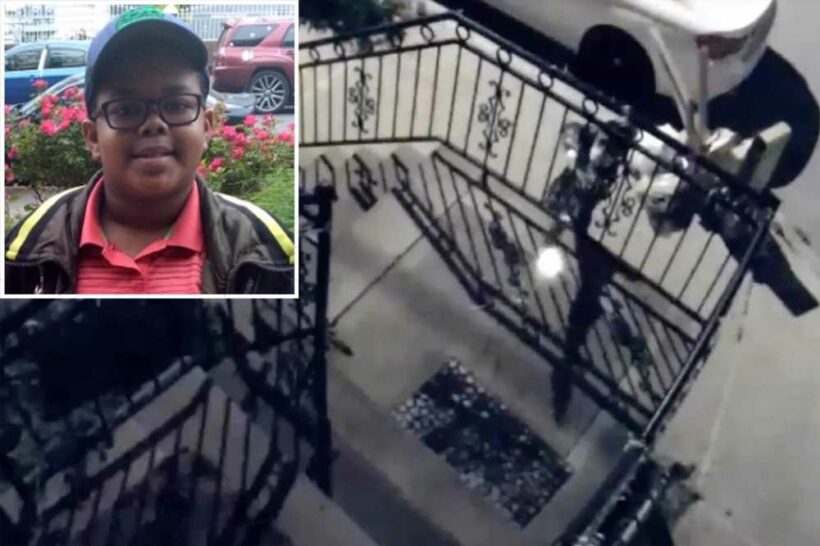 One dead, one wounded in two NYC shootings overnight

Chilling surveillance video captured the moment a gunman fired at a Queens home Saturday amid a parking dispute — killing a 10-year-old boy.

The footage, tweeted by the NYPD on Sunday, shows the killer walking on the sidewalk in front of a home on Beach 45th­ Street in Far Rockaway around 9:30 p.m., reaching his arm through its iron railing — and pumping a barrage of bullets at the house.

The video shows eight bright bursts, one for each bullet fired.

The father of slain sixth-grader Justin Wallace told The Post on Sunday that his nephew was opening the door and his son was standing just inside when the carnage occurred.

Justin was fatally shot in the abdomen, while the nephew, 29, took a non-life-threatening bullet to the shoulder.

The shooting stemmed from a long-simmering dispute between neighbors over their shared driveway, according to Albert Wallace, Justin’s dad, and law-enforcement sources.

The suspect was wearing dark pants, a multicolored sweatshirt with the hood up over his head and a face mask when he fired his weapon, the video shows. The footage also includes what appears to be a blue SUV or van driving on the road.

The NYPD released the video as it hunts for the suspect.

“WANTED for HOMICIDE: Do you know this guy?’’ the tweet said.