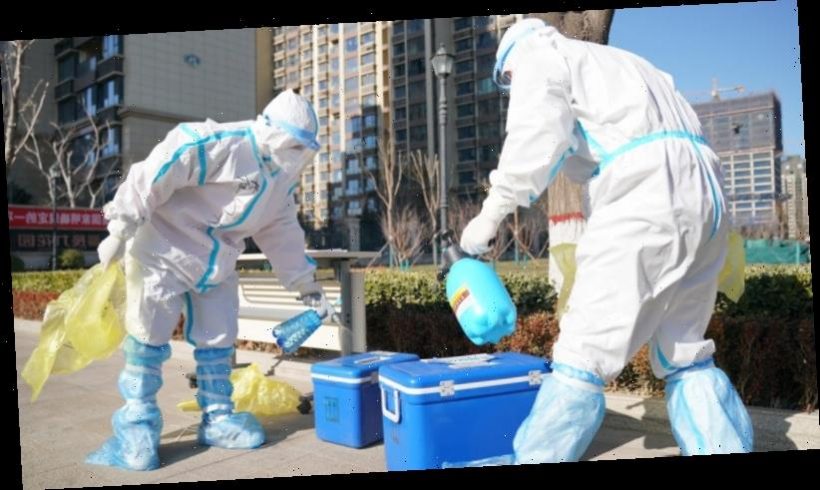 Beijing: A year after the new coronavirus first erupted in Wuhan, China has declared wartime mode and has locked down another city of 11 million to combat a resurgence of infections.

Authorities in the north-western city of Shijiazhuang have barred people and vehicles from leaving, in efforts to curb infections after the country reported 103 new cases, its biggest one-day increase in five months.

The city has been among the hardest hit after a handful of infections cropped up in Beijing in mid-December and spread across at least four surrounding provinces, including Hebei itself, where Shijiazhuang is located. 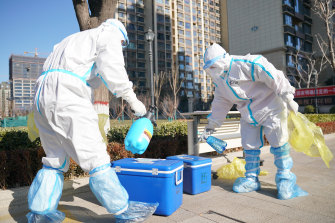 Workers disinfect containers of coronavirus test samples outside a residential complex in Shijiazhuang in northern China’s Hebei Province on Friday.Credit:Xinhua/AP

Since then, China has recorded 727 infections, though hundreds of asymptomatic cases have also been found, details of which are not included in the official daily tally.

Officials are taking no chances, especially in the weeks leading up to Chinese New Year on February 12, a holiday and travel period that experts say was likely to have exacerbated the spread last year.

China has fine-tuned its emergency response measures, having dealt with a series of outbreaks since the first infections emerged in Wuhan last year, rolling out strict curbs even if only a few cases occur. 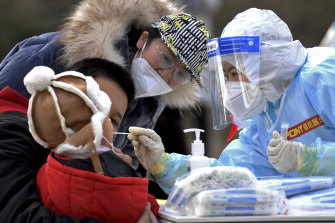 A child is tested for COVID-19 in a residential area in Shijiazhuang, Hebei province, China, on Sunday.Credit:Xinhua/AP

In the past few days, officials have set up thousands of testing stations in Shijiazhuang, including buses converted into mobile units that work inside residential compounds.

A few hundred medical staff have been dispatched from elsewhere to get the entire city tested within days. 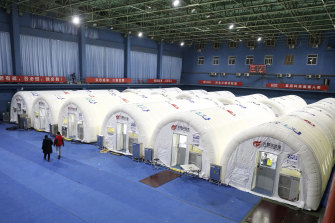 One hospital has moved non-COVID patients to other facilities to focus solely on treating coronavirus patients. Three others have been designated as back-ups, to admit patients if necessary.

Housing compounds in the city now only have a single exit and entrance to ensure residents are abiding by quarantine restrictions.

Using a phrase that means "keep going", one person wrote online: "I feel like I am seeing again what happened last year in Wuhan, but now we are more experienced and everything will be more smooth. Shijiazhuang – add oil!"

Chinese officials are trying to inoculate 50 million people before Chinese New Year. In Shijiazhuang, the local centre for disease control and prevention has approved 28 locations in the city to administer vaccines, though only those in priority groups, such as Chinese travelling abroad, are able to receive them.

Part of China's success has lain in its ability to unleash Mao-era grid-style policing, relying on neighbourhood party committees to enforce quarantine and get residents to report each other for not wearing face masks.

Those quarantining at home are often subject to severe restrictions to ensure compliance. Alarms placed on people's doors ping neighbourhood guards if they are opened, even for a second. In other instances, security cameras or sticker seals have been placed at the entrances to homes to enforce quarantine.

Central and local government officials have engaged in a no-tolerance policy, detaining people who do not comply with face mask wearing or social distancing measures.

In far western Xinjiang, an outbreak last year was met with an outsized response – one that residents criticised and surmised was part of a wider crackdown on the Muslim minority groups in the region. Accounts surfaced of people being chained to pillars, physically barricaded in their homes or forced to consume leftover herbal medicines from communal vats, causing – rather than curing – health complications.

"A door seal is not enough, they need to put a steel bar across the front of residents' doors," wrote one social media user.

But another wrote: "If there were accidents, earthquakes or fire, where can we escape to? From the window? Now that even our basic personal safety cannot be guaranteed, why do we care about fighting the virus?

"Some compounds even mandate residents to consume [medicine] in front of officials or record a video of them taking the meds.

"Is it reasonable that the residents don't have any right to choose?"

A World Health Organisation (WHO) team of international experts tasked with investigating the origins of the COVID-19 pandemic will arrive in China on Thursday, Chinese authorities said.